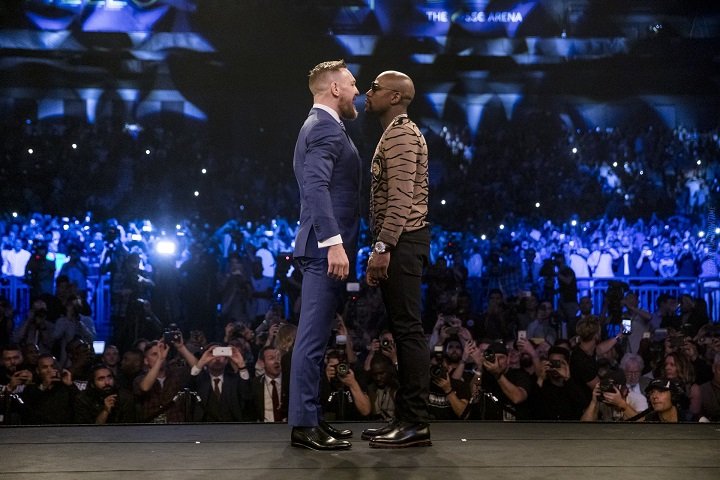 By Jeff Aranow: Conor McGregor’s agenda is to beat Floyd Mayweather Jr. and ruin his boxing legacy on August 26 in their fight on Showtime PPV from the T-Mobile Arena in Las Vegas, Nevada. Mayweather and the birthday boy McGregor met on Friday for their final stop in their 4-city International press tour at the SSE Wembley Arena in London, England.

McGregor had the boxing public fully on his side. During the press conference, McGregor put his hand on Mayweather’s bald head, and the boxing crowd erupted in laughter.

It’s a fight that very well could ruin Mayweather’s legacy because he’s heavily favored and facing a guy with no experience in boxing in 29-year-old McGregor. It was Mayweather who decided to take on a novice. There are some in the boxing world who doubt that Mayweather will lose credibility of he gets knocked out by McGregor, but I think they could be wrong. Like any fighter that goes to the well one time too many times in their career, Mayweather’s legacy can be harmed with a loss to McGregor, especially if it’s a bad knockout loss.

I don’t know if one loss will be enough to ruin Mayweather’s legacy, but 2 losses back to back would likely do irreparable harm. The reason I say 2 is because there’s a very good chance that Mayweather fights McGregor in a rematch in the UFC for another payday. Greed is good. Mayweather would be diving in for one last big payday against McGregor no matter what the outcome is for their fight on August. Even if Mayweather wins that fight, he’s expected to fight McGregor a second time. Getting another $100 million will go long ways to cushion Mayweather’s bank account in case he blows throw a big port of his money in a hurry.

As much as you want to dismiss the chance of Mayweather losing to the bigger, stronger McGregor on August 28, you can’t rule that out from taking place. Mayweather has been out of the ring for a long, long time with his 2 year retirement from boxing. He also hasn’t faced a good opponent in many years. Mayweather fought Pacquiao after he got old and was injured with a shoulder problem. You can’t count Mayweather’s fights against Andre Berto and Marcos Maidana as being matches against good opposition, as both fighters were mediocre and not dangerous.

The last dangerous opponent Mayweather faced was 22-year-old Saul Canelo Alvarez. That was a fight in which Mayweather fought Canelo before he was in his prime. It’s been a long time since Mayweather took on someone that was any real threat to him. He’s always seemed to fight guys when they were not in their prime. Maidana was in his prime, but he wasn’t nearly the best fighter in the 147lb division. That was just a handpicked opponent for Mayweather.

“I’ve got to be real, when his [Mayweather’s] legacy is destroyed in six weeks’ time, it will fall on you [Leonard Ellerbe] and Mayweather Sr’s shoulders,” said McGregor. “He could’ve rode off into the sunset at 49-0. Instead, this is my first time in a boxing ring and in six weeks’ time… I run boxing. How did they let me ride in here? They got greedy, that’s what.”

McGregor is getting ahead of himself. This probably isn’t the end of Mayweather whether he wins or not. Mayweather, 40, has already mentioned wanting to fight McGregor in the UFC under MMA rules. I think it’s obvious that would be Mayweather’s next move. If he can get $100 million to fight McGregor in a rematch, then I see him taking that fight because he won’t be risking a real loss as far as his boxing record. It would be a situation where Mayweather would be the novice going into the McGregor fight with a 0-0 record in the octagon.

Former heavyweight world champion David Haye thinks Mayweather is making a mistake in risking his legacy fighting McGregor, because he sees it as a fight that could go against him.

“Mayweather is risking everything,” Haye told Sky Sports News HQ. ?”He could completely and utterly undo the amazing legacy that he’s built since he was a young child, if he gets beat by someone who’s not even a boxer.

I think Mayweather is so focused on the $100 million that he’ll be making for the fight, he doesn’t care whether there’s a risk of his legacy being trashed. As long as Mayweather gets a big payday, I think that’s the only thing that counts for the 40-year-old. It’s all about money at this point.

If it were about the sport, Mayweather would be fighting a real boxer like Keith Thurman, Saul Canelo Alvarez, Gennady Golovkin or Errol Spence. Those are the fighters that Mayweather needs to be taking if he wants to increase his status in the boxing world. The fans would go made if Mayweather were to fight a top boxer like Canelo or Spence. The fans would love to see that fight. 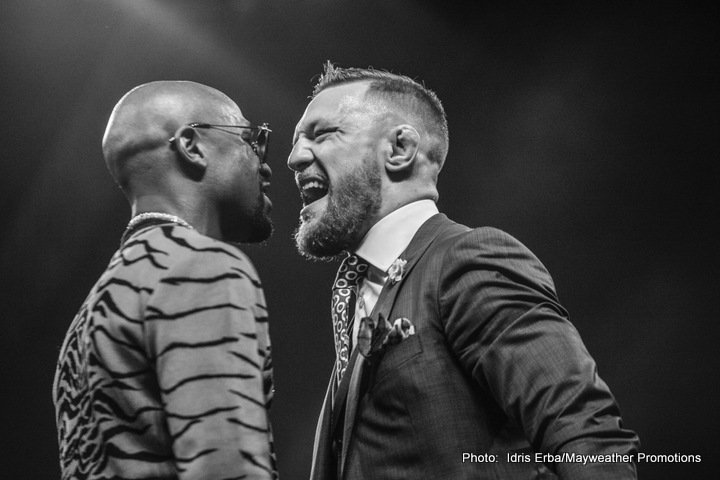 
« McGregor unhappy with Mayweather ordering his bodyguards to swarm him