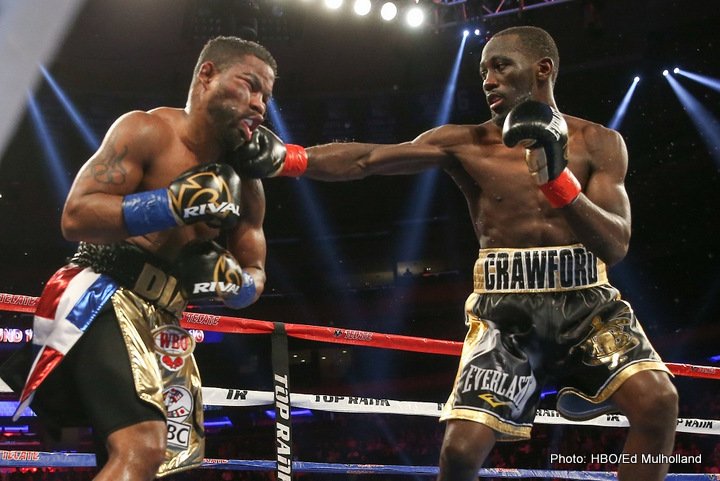 By Chris Williams: Terence Crawford vs. Felix Diaz brought in good ratings last Saturday night on HBO Championship Boxing in pulling in an average of 961,000 viewers with a peak of 1.036 million viewers for their fight at Madison Square Garden in New York. That was an increase of 19% for the 29-year-old Crawford from his previous fight on HBO against John Molina Jr., which averaged 806,000 viewers last December.

What the increase in numbers could suggest more than anything that the boxing public liked the Crawford-Diaz fight a lot more than Crawford-Molina, which was pretty much a horrendous mismatch, given that the 34-year-old Molina Jr. had come into the Crawford fight having lost 3 out of his last 5 fights. You don’t normally see challengers getting title shots with a record like that. Top Rank, the promoters for Crawford, probably should have thought it out before deciding to match him against Molina.

That was a fail the moment the decision was made to make that fight. Top Rank appeared to be banking on the hardcore boxing fans being impressed with Molina’s recent win over Ruslan Provodnikov in his previous fight. That was not an exciting fight because Provodnikov looked completely shot and disinterested in fighting, and Molina was boxing him the whole time instead of slugging like he used to do.

I doubt that a lot of fans were really excited about the Crawford-Diaz fight. It wasn’t a match-up that had sparked much of any interest from the hardcore boxing public on social media. The fans saw it as another one of the lackluster match-ups that we’ve seen from Top Rank for Crawford. He’s only had one exciting fight his entire pro career and that was against Yuriorkis Gamboa in 2014. The rest of the fights Crawford has had have been pretty dull affairs in my opinion. Crawford-Diaz was no exception. That fight was hard to watch. Diaz, 5’5”, was too small to land his shots, and Crawford would either hold or move away when Diaz would come forward and try and land his punches.

In the co-feature bout on the Crawford-Diaz card, lightweight Ray Beltran vs. Jonathan Maicelo averaged 687,000 viewers with a peak of 723,000 viewers. Those are high ratings for a fight between obscure fighters. Beltran isn’t a big name at all in the boxing world, and neither is Maicelo. That suggests that the fans just wanted to see some boxing last Saturday night, so they tuned in regardless of neither fight begin good ones on paper.

Showtime Boxing had a telecast last Saturday night as well. WBC featherweight champion Gary Russell Jr. defending against fringe contender Oscar Escandon at the MGM National Harbor in Oxon Hill, Maryland. Russell-Escandon pulled in an average of 481,000 viewers on Showtime with a peak of 517,000 viewers. Russell knocked Escandon out in the 7th round after dropping him twice in the fight. This was not a great fight at all. It was a mismatch. The only thing good about the Russell Jr. vs. Escandon fight is the fact that was at least sort of sort of competitive.

When you compare the Russell Jr-Escandon fight to Russell’s last mismatch against Patrick Hyland, it seems exciting in comparison. Hyland was a guy without a hope that Russell Jr. destroyed in 2 rounds last year in April 2016 in his first title defense of his World Boxing Council 126 pound title. Personally, I can’t wait for Russell Jr. to fight his No.1 contender Carl Frampton or No.2 contender Joseph Diaz Jr. Those fights at least promise to be interesting.

It’s up to the WBC to decide when they’re going to press Russell Jr. to face his mandatory. WBC light heavyweight champion Adonis Stevenson hasn’t defended against his mandatory challenger for ages. If the WBC decides to let Russell Jr. make nothing but voluntary defenses, then it could be a while before he faces a stiff challenge.

In the co-feature bout, Andre Dirrell vs. Jose Uzcategu averaged 354,000 viewers on Showtime with a peak of 459,000. That fight ended on a bad note with Uzcategui fouling Dirrell with a left-right to the head after the bell ended. Dirrell was knocked unconscious. Uzcategui was then disqualified. After the fight, Dirrell’s assistant trainer punched Uzcategui in the jaw before leaving the ring. Dirrell was losing the fight at the time the match was stopped. Uzcategui probably would have beaten Dirrell if not or the disqualification.

For some reason, Dirrell continually went to the corner and would trap himself there. That’s got to be one of the biggest mistakes that a fighter with a weak chin can make against a big slugger like Uzcategui. Dirrell was hurt in the 2nd round after getting hit hard. Dirrell recovered and was able to mostly get the better of Uzcategui in rounds 3 through 7. However, Dirrell’s high wire act finally caught up to him at the end of the 8th round when Uzcategui knocked him out with a 4-punch combination.

It was Uzcategui’s bad luck that the last 2 punches he threw came after the bell had sounded to end the 8th. Uzcategui had already started his sequence of shots. Dirrell, 33, was going to get knocked out if the fight had a few more seconds in it. It’s too bad for Uzcategui. He was the better man, but he made a mistake of not listening for the bell. I think he got carried away with himself.

For Dirrell, it’s a bad way for him to win the IBF interim super middleweight title, because many boxing fans think he faked being knocked out in order to win a disqualification. The win for Dirrell only temporarily helps him. Dirrell still has to prove that he can beat IBF super middleweight champion James DeGale. Dirrell lost to DeGale already in a 12 round decision defeat two years ago in 2015. Dirrell was knocked down 2 times in the 2nd round of that fight. I suspect that DeGale has Dirrell’s number and will beat him in the rematch.

The light welterweight contender between Rances Barthelemy and Kiryl Relikh had an average of 267,000 viewers with a peak of 295,000. Relikh lost a controversial 12 round unanimous decision despite out-landing Barthelemy by a wide margin and knocking him down.

In a tape delay fight from the UK, IBF super featherweight champion Gervonta Davis vs. Liam Walsh averaged 228,000 viewers with a peak of 253,000. Davis knocked out Walsh in the 3rd round. Davis’ promoter Floyd Mayweather Jr. sees him becoming a huge star in the boxing world in the future. Davis needs to probably move up to at least light welterweight for him to have a chance of becoming a star.

There hasn’t been any huge stars I the super featherweight division in the States. The same goes for the lightweight division. If Davis can put on a little weight to fight at 140, then it’s possible that he could become a star one of these days if he keeps winning. 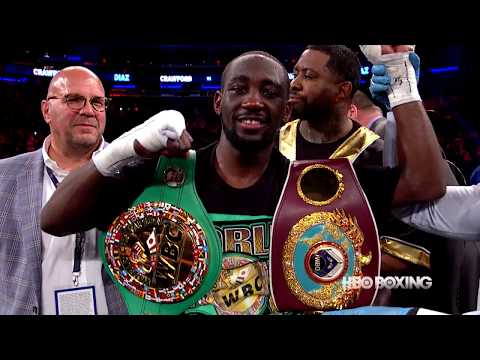