Hearn says Joshua is the “biggest star in boxing” 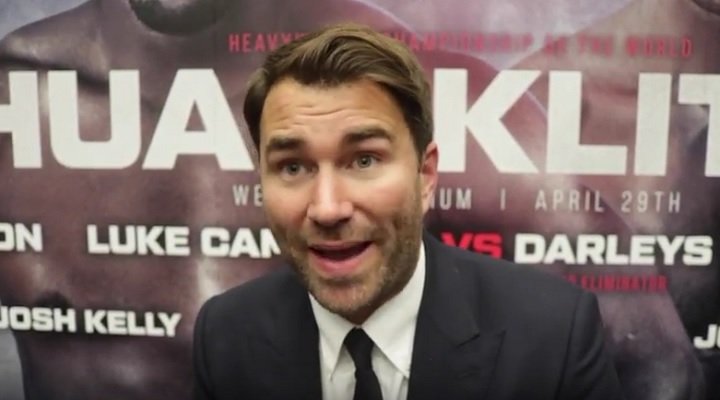 By Scott Gilfoid: Promoter Eddie Hearn is crowing like a rooster about his fighter Anthony Joshua’s win over Wladimir Klitschko last Saturday night, and he’s now blabbering about how he sees him as the “biggest star in boxing” after beating the 41-year-old former world champion. This was supposed to be the 27-year-old Joshua’s coming out party to make him a worldwide star in boxing.

Instead, it became a situation where the 6’6” Joshua was exposed by Wladimir to be shown as a limited fighter. Wladimir looked like the better fighter by far, but by an error on his part, he allowed Joshua to creep back into the fight and score an 11th round knockout. The crowd of 90,000 boxing fans, mostly from the UK, clearly loved Joshua’s victory, and they’ve been raving about it ever since. But looking at the fight from a practical standpoint without an idealistic view, Joshua looked absolutely dreadful out there against Klitschko last night.

Joshua DID NOT look like the “biggest star in world boxing,” as Hearn is saying. Joshua didn’t even look like the best fighter in the UK. There are some good fighters in England and Northern Ireland. I rate Carl Frampton, Tyson Fury and Terry Flanagan above Joshua in talent. That’s just a small list. There are many more fighters from the UK that I see as better than Joshua. They might not be more popular than Joshua, but I think they’re better fighters than him.

“Anthony Joshua became the biggest star in world boxing,” said Hearn to IFL TV last Saturday night after Joshua’s win over Klitschko. “No question. He deserves it. He won the Olympic games as a novice. He won the world heavyweight title as a novice. I can him a rookie still because he’s still earning. He’s not ready for an acid test. You saw that tonight. It is too early. They asked him what’s next and he said, ‘Tyson Fury,’ because Tyson Fury is always calling Joshua out. I don’t blame him. It’s a massive fight. I don’t know what’s next, whether it be Klitschko again, whether it’s Fury, whether it’s Wilder, I guarantee you it will be a big fight. I like the Fury fight. There’s a lot of clouds over his return. It’s great. It’s great seeing him training. He’s got to go through the [Boxing] board [of Control]. He’s got to go back and win again, but we’d love to fight Tyson Fury. It would be a massive fight for British boxing. There’s going to be a lot of phone calls next week; not in terms of making another fight. I don’t think we’ll be discussing the next fight for a couple of weeks. We’ll definitely do that,” said Hearn about a rematch with Joshua and Wladimir.

I don’t think it’s fair to Joshua or the other fighters in the UK for Hearn to be yapping about Joshua being the “biggest star in world boxing.” He’s definitely not the biggest star. He’s not PPV in the U.S, and it’s a good thing that Hearn didn’t insist on that happening, because it would have been a failure. Joshua is just a popular in the UK, and that’s all he is. He needs to fight Wladimir again so that the boxing public can see if he’s able to beat him a a more dominant fashion because the way he fought last Saturday left a lot of doubt in the minds of a lot of fans.

All you need to do is look at the boxing forums, comment sections and social media sites today to see how much negative press there is about Joshua. The boxing fans aren’t slathering Joshua with positive comments up and down. Much of the comments that the fans are saying about the 6’6”, 250 pound Joshua center around him gassing out so quickly after fighting hard for a portion of round 6, and how he was knocked down by Wladimir in that round.

Many boxing fans now question Joshua’s ability to take punishment, and they also wonder why it took him 5 rounds to get his second wind after he gassed out in round 6. Personally, I wasn’t surprised at all that it took Joshua 5 rounds for him to recover from him emptying his tank in the 6th, because I had seen Joshua fade in a similar way in his fight with Dillian Whyte in 2015. It took Joshua 4 rounds to get his second wind after gassing out in the 2nd round of the Whyte fight.

Klitschko was supposed to be a career defining fight for Joshua. We saw that Joshua was not in the same league as Klitschko in terms of talent. That was painfully obvious from the very start of the fight. Wladimir moved better, defended better, threw better punches, and was the faster guy of the two. Joshua was just slow looking, and year had power, but he couldn’t do anything with it because it was so slow and clumsy looking. I shudder to think what a prime version of Lennox Lewis would have done to Joshua if he’d been in the ring with him last Saturday. Even Lewis at the very end of his boxing career would have been too much for Joshua last night. Lewis was just a better fighter.

If Joshua is going to be crowned as the new biggest star in boxing, then the sport is in trouble, because he’s an awful replacement for guys like Manny Pacquiao, Floyd Mayweather Jr. and Saul Canelo Alvarez. I’ve never been impressed with Canelo, but he looks worlds better than Joshua right now, and I don’t even rate Canelo as the third best fighter in the middleweight division. I see him as hype just like I do Joshua.

“We talk about this 10-year plan, we’re kind of having a legacy fight within the first couple of years. It’s here, the timing is perfect,” said Hearn to skysports.com about Joshua.

Well, if Joshua wants to be involved in the biggest fights in boxing, then he needs to take on Deontay Wilder, Luis Ortiz and Tyson Fury after he faces Wladimir in a rematch. I don’t think Joshua is going to win the rematch with Wladimir, because the Ukrainian is going to come back new and improved in the rematch. Wladimir will be like a next generation robot with more skills and more knowledge of how to best Joshua. Wladimir will improve in a huge way in the second fight with Joshua. I wish I could say the same thing about Joshua. I don’t think he can improve. He’s so limited in terms of skills, and body is covered with too many muscles to make him a good fighter. I’ve never seen a fighter slowed down as much from over-muscle as I have with Joshua.

Here are the areas that Joshua will need to improve on for him to become the biggest star in world boxing:

– Beat Wladimir in a rematch, and then Tyson Fury, Luis Ortiz, David Haye, Joe Joyce, Tony Yoka, Alexander Povetkin, Jarrell Miller, Deontay Wilder, Joseph Parker, Oleksandr Usyk and Tony Bellew. It’s not good news for Joshua that talents like Joyce, Yoka and Usyk could soon be on his tail looking to take his place at the top of the division, and further expose him the way that Wladimir did last Saturday.

– Work on improving stamina in a MAJOR way

– Use head movement a lot more

– Get another trainer that will make the improvements in his game. Joshua would be so much better than he is right now if Freddie Roach or Virgil Hunter were training him right now in my opinion. Joshua should move his training to the States and take it up in Bear Mountain where he can isolate himself and focus only on training.

This is a long list of things that the 27-year-old Joshua needs to accomplish for him to become the biggest name in boxing. I don’t think he’ll ever be able to do all of those things. 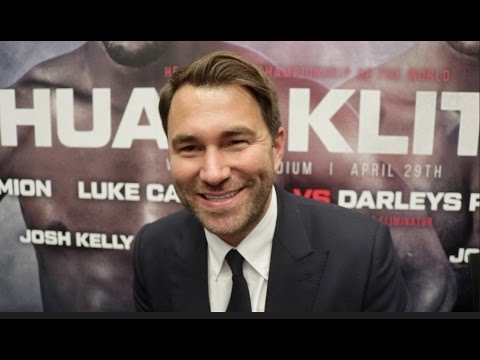 
« What will defeat mean for Wladimir’s legacy in the sport?

Canelo vs. Chavez Jr. battle this Saturday on HBO PPV »