Broner vs. Granados moved to 147 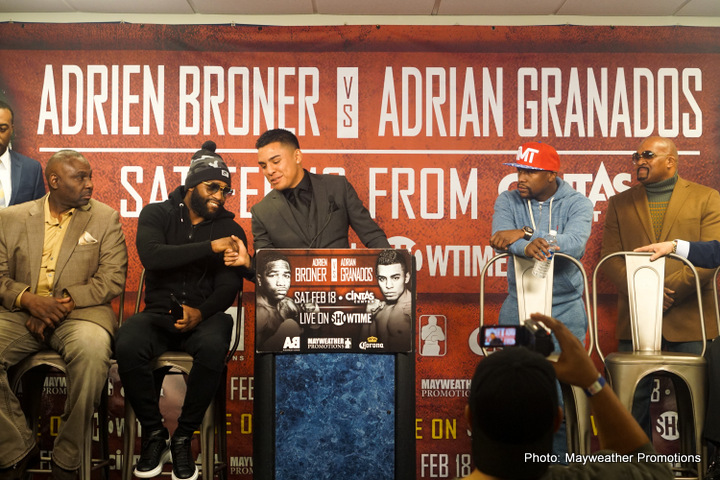 By Sean McDaniel: Former four division world champion Adrien “The Problem” Broner (32-2, 24 KOs) will be fighting at 147 pounds for his next fight against Adrian Granados (18-4-2, 12 KOs) on February 18 at the Cintas Center in Cincinnati, Ohio. Broner and Granados were originally scheduled to fight at a catch-weight of 142 pounds, but Team Broner asked the weight to be moved up to 147, according to RingTV.com.

Broner was said to be sick during training camp, and that’s why the weight needed to be moved up. Broner missed weight in his last fight against fringe contender Ashley Theophane on April 1 last year.

Broner came into the fight one-half pound over the 140lb limit. Broner lost his WBA World light welterweight title due to him missing the weight. He still won the fight by a 9th round knockout, but he lost his WBA title on the scales.

In Broner’s last seven fights, he’s only made 140 three times. It would seem obvious that Broner needs to move up in weight to welterweight division. If Broner, 27, can’t make the 140lb division on a consistent basis, then it suggests that he needs to move up.

If Broner can’t be counted on to make the weight limit for the 140lb division, then it makes sense for him to move up in weight and try his best to compete with the welterweights. If Broner wants to stay at 140, then he should get dietician that plans all of his meals during training camp, and maybe even in between fights so that he doesn’t balloon up in weight too much.

“It is actually at 147,” Granados said to RingTV.com on about the weight for the Broner fight. “It was 142 but its 147 now and it’s just the way it is. Yes, they did, [to have the weight increased from 142 to 147] and it was kind of a take-it-or-leave-it offer. So I’m obviously not going to pass up on this opportunity and I accepted.”

It’s not a lot of weight that Granados is being asked to move up to accommodate Broner. What’s more important than the small amount of weight that Broner is asked Granados to move up for the fight is whether Broner can be counted on to make the 140lb limit in the future.

Logically, it might be in Broner’s best interest to move up to 147. If he can’t make the weight, then he should move to the welterweight division and try his best to find success in that weight class. Broner was beaten soundly by Shawn Porter at welterweight in June 2015. Broner used the wrong fight strategy for that match. Instead of going after Porter to try and punch with him, Broner chose to move around the ring for 11 rounds and constantly tie him up. Broner fought aggressively in the 12th round and was able to knock Porter down.

It looked like Broner was using the game plan that Kell Brook employed in his win over Porter in 2014. It worked for Brook back then, but that was because Porter didn’t know how to deal with all the holding. By the time Porter fought Broner in 2015, he knew how to handle constant holding.