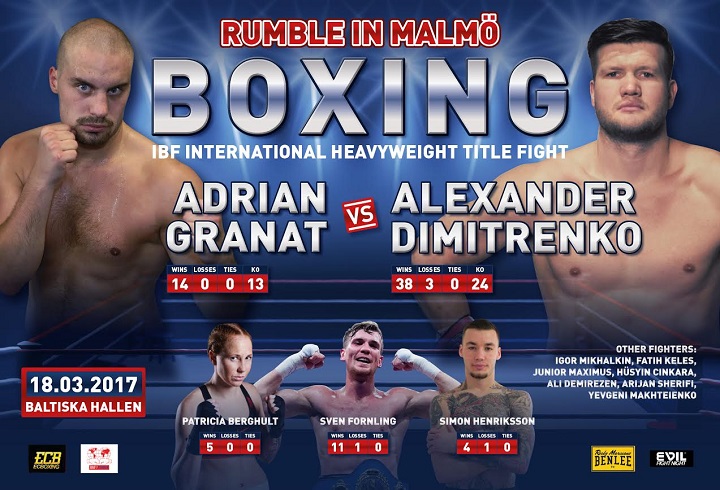 This week`s Monday, Granat traveled to Spain for a training camp with the legendary trainer Roman Anuchin (previously with Team Mayweather).

Granat:
“It`s great to have a change of environment every now and then and it is an honor to get the chance to work with Roman. After my training camp in Spain, I will fly back to Hamburg and continue with a 2-3 weeks sparring camp. We have hired 5 tough sparring partners – let’s see how long they last”.

Granat:
“People are starting to pay attention. It’s fun, but nothing I particularly care about. My goal – and this is my only goal – is to become No. One. Already now I know that there are extremely few heavyweights out there who have a chance against me. The fight against Dimitrenko will be my toughest fight so far. He has fought 41 fights and has only lost three of them and he has great experience. Therefore I am ready to go the full distance if needed – BUT if Dimitrenko gives me just the smallest opening he will get knocked out quickly. That`s how I operate.”

Promotor Erol Ceylan is enthusiastic about the event:

“We have already sold a lot of tickets. You can really tell this is the first heavyweight title fight in Sweden in fifty years. The people in Malmö are very happy to have international professional boxing back after such a long time. Everybody has given us such a warm welcome.”

Dimitrenko won a tune up fight today in Hamburg, you can watch the fight on boxen-news.