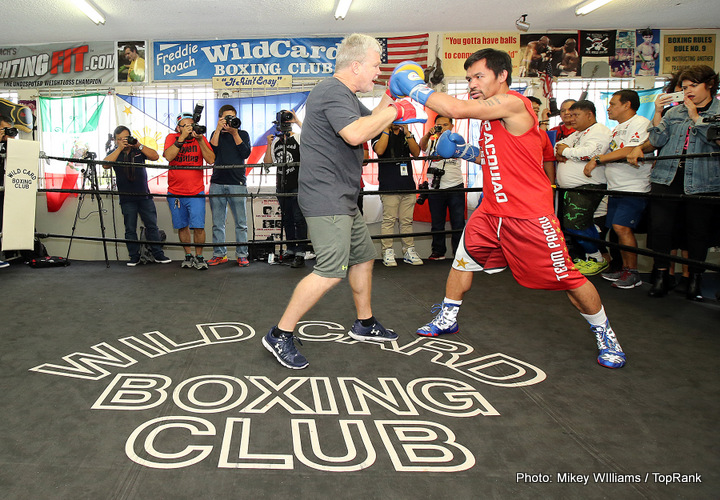 By Chris Williams: Jeff Mayweather doesn’t believe that Manny Pacquiao really wants to fight Terence Crawford at all. He feels this way because of the recent $20 million request that Pacquiao made from his promotional company Top Rank for him to fight the unbeaten Crawford (30-0, 21 KOs).

Crawford should have moved up in weight to the 147lb division already if he wants to be a big star. Instead of moving up, the 29-year-old Crawford is talking about wanting to stay t light welterweight long enough to unify all the titles.

What might be keeping Pacquiao from getting the bigger money now is the match-making that’s being done for him. Instead of Pacquiao being put in with guys that the boxing world wants to see like Saul Canelo Alvarez, Keith Thurman, Gennady Golovkin and Adrien Broner, we’re seeing him face Tim Bradley for the third time and Jessie Vargas. Why Pacquiao’s promoter Bob Arum chose to match him against those two fighters is anyone’s guess. Someone should have told the 85-year-old Arum that if he matched Pacquiao against those guys, he wouldn’t bring in huge PPV numbers.

Jeff Mayweather said this to Fighthype.com about Pacquiao asking for too much money for the Crawford fight:

“That says he don’t want to fight him,” said Jeff Mayweather about Pacquiao asking for $20 million for a fight against Terence Crawford. “It also says that he’s smart. Him fighting Terence Crawford ain’t even worth $20 million. Terence Crawford hasn’t done enough for you to demand that kind of money. So basically what he’s saying is, ‘I’ll take $10 million or $15 million.’ That’s what he’s saying, because he knows he’s not going to get $20 million. That’s business. This boy isn’t stupid. That’s just like what I told you about Canelo. ‘I’m going to fight all these bums.’ It’s just like what Triple G [Gennady Golovkin] is doing. ‘So then by the time I fight you, you’re going to be old. You’re going to be an old man, and I’m still going to get all the money.’ Yeah, he’s going to be rich, man,” said Jeff Mayweather about Canelo.

If Pacquiao is supposed to be getting $20 million per fight for a minimum, then he’s not really pricing himself out. For Pacquiao to make that kind of money, he needs to be matched against live bodies. He can’t be put in with tired old fights like Tim Bradley or little known fighters like Jessie Vargas. That’s crazy match-making. I wouldn’t have made those fights if I were Arum.

Bradley and Vargas would be on the bottom of my list for Pacquiao to fight, because I would have known that few boxing fans would want to see those fights. If this was 2012 and not the present time, then the fans would want to see Pacquiao fight Bradley. Even if it was 2012, I think the fans would have zero interest in a mismatch between Pacquiao and Vargas. That would be a nonstarter no matter what year the fight took pace. It’s the same with Pacquiao’s mismatches against Chris Algieri and Brandon Rios.

You don’t put Pacquiao in with those guys unless you’re good with fewer PPV buys than what Pacquiao used to bring in for his fights during his best years. I think the match-making, or lack thereof, has eroded Pacquiao’s popularity in the past year. The only way you can fix that is by shocking the boxing public by throwing Pacquiao in with Canelo, Golovkin, Errol Spence Jr., Keith Thurman or Jermall Charlo. It has to be someone that the fans would least suspect you to match Pacquiao against. The fans obviously weren’t expecting Arum to be interested in matching Pacquiao against little known fighters like Jeff Horn, but that fight would likely shock fans in the wrong way rather than the right way.

Pacquiao probably won’t bring in huge money fighting Crawford, but that’s not his fault. If Crawford had been moved along at a quicker pace than he’s been since turning pro, he’d potentially be a big name right now, and Pacquiao wouldn’t have to worry about getting his $20 million fighting him. Crawford should have been moved up in weight to 147 two years ago. He should have been fighting the non-Top Rank big names in my view.

Crawford should have been coached in how to fight in a crowd-pleasing manner by being more aggressive in the ring. Even outside of the ring, Crawford would be a bigger name if he had someone that could coach him on his image in how to act, talk and dress in order to become a big star. Crawford needs someone to help change his image inside and outside of the ring. That type of stuff should have happened years ago in my book.

Pacquiao isn’t going to make big money fighting Crawford unfortunately any of the other Top Rank fighters. He’s going to need to go outside of Top Rank if he wants to make the big money. Will Arum work the other promoters outside of his Top Rank stable to setup fights against Pacquiao? I doubt it. Arum will obviously match Pacquiao against possibly Jeff Horn or Ricky Burns, but those aren’t big names. Those are guys that will likely bring in fewer PPV buys than Crawford would.

Hunter dares Golovkin to give Jacobs a free shot »