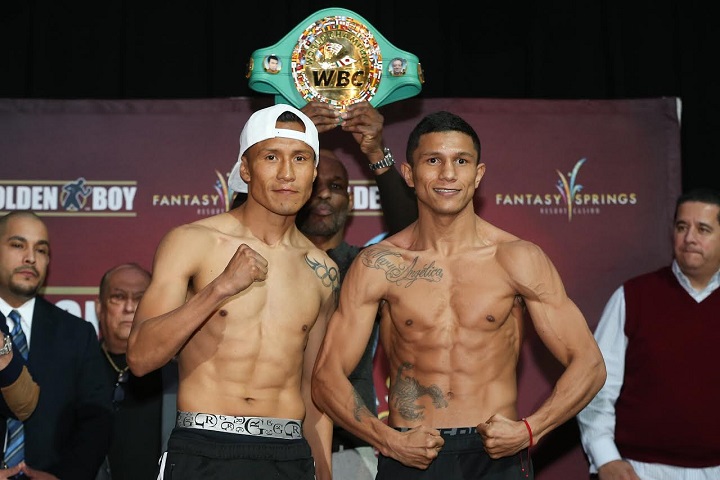 By Dan Ambrose: Fresh off his controversial draw against Orlando Salido last June, WBC World super featherweight champion Francisco Vargas (23-0-2, 17 KOs) successfully weighed in at 129.6 pounds for his voluntary title defense against #7 WBC Miguel Berchelt (30-1, 27 KOs) on Saturdah night on HBO”s Boxing After Dark at the Fantasy Springs Resort Casino in Indio, California is. The 25-year-old Berchelt weighed in at 129.8lbs.

On paper this is a good fight, but it’s likely going to end early with the 32-year-old Vargas easily beating Berchelt. There’s a huge talent and experience difference between these two fighters.

Berchelt has been fighting weak opposition through his entire seven-year pro career. Berchelt only stepped in up against a decent fighter once in facing Luis Eduardo Florez in 2014, and he lost that fight by a 1st round knockout. Florez stocked Berchelt around the ring and dropped him with a left hook. The fight was over at that point. Berchelt didn’t have the defense or the chin. Vargas vs. Florez would be a good fight, even though Florez has since moved up to 140 and lost a number of times.

Vargas is very fortunate that he’s still the WBC champion, because he took a real pounding in his last fight against Orlando Salido last year. It was pretty brutal to watch how much punishment Vargas took. It was disappointing that the three judges that worked that fight gave Vargas a draw. One even had Vargas winning the fight. I saw the same fight and I had Salido easily winning. Even though Vargas was able to escape without losing the fight, he’s not going to be able to make a career out of getting controversial draws. Vargas is going to need to start looking better. Vargas also can’t afford to take too many beatings like he did against Salido if he wants to stay on top for much longer. Vargas is lucky he’s only fighting Berchelt rather than a good contender like Salido again, because I don’t think he can take another beating like the one that he took last time he fought.

Berchelt has some punching power, and he could be a problem for Vargas if he doesn’t get knocked out immediately. However, I can’t see Berchelt lasting more than a round or two. He’s too wide open for left hooks, and Vargas likes to throw those.

In the co-feature weights, former WBC super featherweight champion Takashi Miura (30-3-2, 23 KOs) weighed in at 129.8 lbs. for his fight against #6 WBA Miguel “Mickey” Roman (56-11, 43 KOs) in their scheduled 12 round fight. Roman weighed in at 129.2lbs. Roman has won his last 18 fights in the last four years. However, Roman hasn’t fought anyone good in many years since losing to Dante Jardon, Antonio DeMarco, Javier Fortuna and Jonathan Victor Barros. The 32-year-old Miura is expected to win this fight comfortably. Miura lost his WBC title to Vargas by a 9th round knockout in November 2015.Miura fought only once in 2016 in beating Jimmy Barbon by a 1st round knockout.

Opening up the telecast at Fantasy Springs Resort Casino in Indio, California is a 12-round super featherweight attraction between Takashi Miura and Mickey Roman.