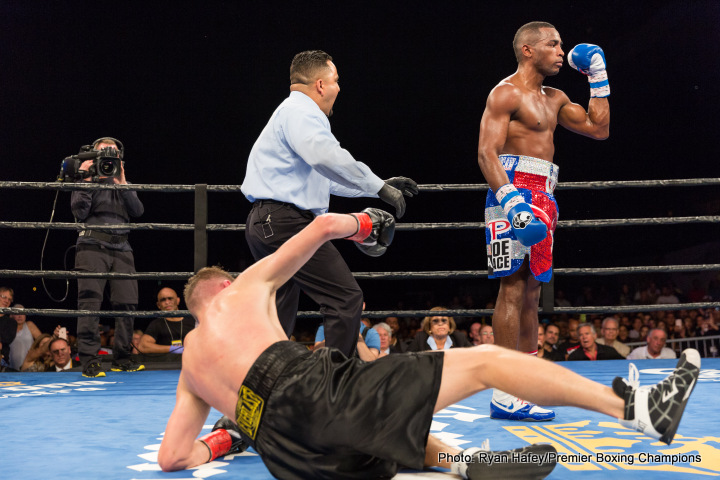 By Jim Dower: IBO/WBA Super World junior middleweight champion Erislandy “The American Dream” Lara (24-2-2, 14 KOs) was too good for former WBA 154lb champion Yuri Foreman (34-4, 10 KOs) in stopping him in the 4th round on Friday night to retain his titles at the Hialeah Park & Racing Casino in Hialeah, Florida.

Foreman, 36, struggled badly to get back to his feet. However, referee Richard Green stopped the fight after seeing how badly hurt Foreman was after he got back up. There was no way that the fight could continue with Foreman unable to stand without swaying back and forth while being looked over by Green. The official time of the stoppage was at 1:47 of round 4.

Lara also knocked Foreman down in round 3, but that was from a trip. Foreman tripped over Lara’s lead leg, causing him to fall to the canvas. The referee blew the call in saying it was a knockdown. It was a clear front leg sweep by Lara. Fortunately for the boxing fans, the blown call didn’t mar the fight results, because that would have been a pity if that had been reason for Lara winning.

There wasn’t much action to speak of in rounds 1 and 2. The light hitting Foreman bounced around mostly, and occasionally rushed Lara while throwing shots that frequently missed their mark. Lara was good at catching Foreman with single left hands to the head when he would charge him. However, Lara didn’t have the power on his shots to hurt Foreman. 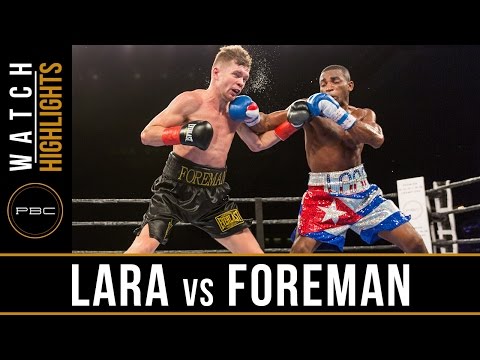 Foreman didn’t have the hand speed to land his punches when he would rush Lara. He was throwing slow combinations and hitting nothing but air. Foreman needed to double jab on the way in, because Lara was reacting to everything that he threw to dodge the shots. If Foreman had double-jabbed while coming forward, he would have increased his chances of landing something.

Lara landed a big left hand to the head of Foreman in round 2 as he was coming forward. It was a nice shot. Foreman took it well. That was the only significant shot of the entire round. Foreman attacked Lara occasionally with combinations when he would charge him, but almost everything he threw missed badly. Foreman didn’t have the right game plan. He was trying to hit Lara to the head, and that’s not what you do against him if you want to beat him.

The guys that gave Lara problems in the past – Alfredo Angulo, Carlos Molina and Canelo Alvarez – all attacked him to the body, and they had success. Foreman is a head hunter with an Eastern European fighting style. He was obviously well-picked by Lara’s management, because he didn’t have the ability in terms of past training to attack the Cuban fighter to the body. That’s the reality. Lara hasn’t been put in with body punchers since his loss to Canelo. It’s smart, but it’s also a strategic move. I think Lara would struggle badly if he matched against Canelo again or Golovkin. Those guys are excellent body punchers.
The Lara-Foreman was televised on Premier Boxing Champions on Spike.

“I promised I’d do it, and I did it,” said Lara about his knockout of the 36-year-old Foreman. “I just want to fight the best in the world – Golovkin, Canelo, [Demetrius] Andrade. They know who they are.”

Lara is not going to get a chance to fight Golovkin or Canelo unless he moves up in weight to 160, and gets highly ranked in that division, because those guys aren’t going to waste time fighting a junior middleweight champion, who doesn’t have much of a fan base to speak of. Lara needs to vacate his WBA title, which he’s reluctant to do, and move up to 160 to start over and try and go after Golovkin and Canelo.

Lara isn’t going to do that though, because he’s getting nice paydays as the WBA 154lb champion fighting weak opposition like Foreman, Ishe Smith, Vanes Martirosyan, Jan Zaveck and Delvin Rodriguez. Once Lara gives up his title and becomes just a contender, then his paydays will get smaller. That’s why it’s unlikely that Lara will ever give up his title at 154.

He’ll stay there, get paydays, and continue to call out Golovkin and Canelo in hopes that one day they’ll agree to fight him. I’m not holding my breath waiting for that to ever happen. Canelo gave Lara a shot in 2014, and the fight was boring to watch because Lara moved around the ring for 12 rounds trying to avoid getting hit. That was Lara’s big chance and he blew it.

Unlike tonight, Lara is usually a safety first fighter, and he doesn’t normally get knockouts. Lara had the perfect opponent for this fight in Foreman, who hasn’t fought much since 2010. In the last seven years of Foreman’s career, he’s rarely fought. This was an undeserved title shot by Foreman. He had done nothing to earn this title shot. In coming into tonight’s fight, Foreman had beaten Jason Davis, Lenwood Dozier, Jamaal Davis, Gundrick King, and Brandon Blaue in the last four years of his career. These are all obscure fighters. Foreman might want to think about retiring from boxing at this point. He got his title shot against Lara. It’s hard to imagine Foreman getting another gift title shot without him facing quality opposition and earning his way to another title fight. The way that Foreman looked tonight, I can’t imagine him being able to beat any of the top contenders at 154 to earn a No.1 spot. I guess if one of the champions wants another safe sure thing title defense like Lara, they might pick out Foreman. I doubt it though.

Lara is supposed to fight someone good in his next fight. WBC champion Jermell Charlo is a name has been thrown about as a possibility for him. However, that’s probably not going to happen. If Lara is going to fight someone good, it might be Demetrius Andrade, who would be a very tough test for him with his power, size and youth. That would be good test. It’s unclear if Andrade wants that fight. He’s in a good spot with his No.1 ranking in the World Boxing Organization’s top 15. If Canelo vacates his WBO 154lb title, then Andrade will be ready to move in and fight for it. 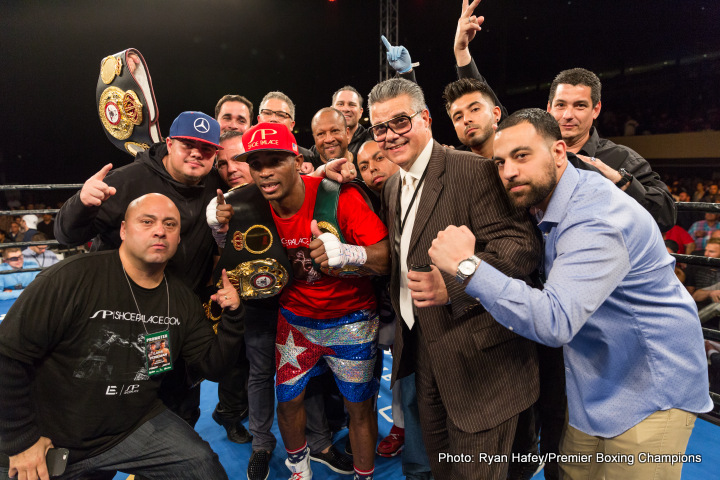 Golovkin vs. Jacobs: Can a Lion Beat a Big Bear? »