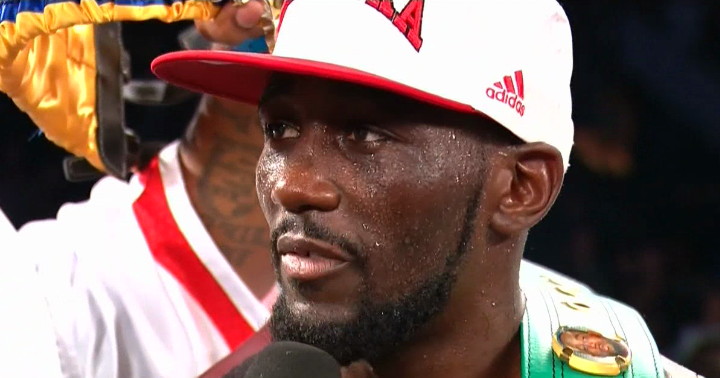 By Chris Williams: WBC/WBO light welterweight champion Terence “Bud” Crawford is denying that he asked for $7 million to fight Manny Pacquiao for his April 23 fight. Their promoter Bob Arum also says that Crawford asked him for $7M for the fight against the 38-year-old Pacquiao.

Trainer Freddie Roach was the one who said that Crawford was asking for $7 million. Roach said it to the boxing media at least twice. The question is why would Roach say that unless it was told him by someone who knows? I smell something fishy. Roach is usually dependable with his news tips. Why would he make up stuff about Crawford asking for $7 million and being turned down?

Arum said that Crawford is a “professional” and “reasonable.” What that means is unclear. Is Arum saying that $7 million would be unreasonable for Crawford? If so, what would be reasonable? Is Crawford expected to take small money for a fight against Pacquiao? If Crawford can’t get a lot of good clean cash for the Pacquiao fight, then what’s the point of fighting him? Don’t say it’s a great opportunity for Crawford to be seen by millions, because he WON’T be seen by millions. With it being on PPV, it might be seen by 300,000 people unless Arum sticks the Pacquiao-Crawford fight on free television like Pacquiao vs. Jeff Horn could potentially be.

How can Crawford be turned into a star by taking Pacquiao’s scalp if the fight isn’t going to be seen by the masses? That’s why it’s important for Crawford get as much cash as possible in my opinion. Crawford should ask for 60-40 split of the loot. If Pacquiao and Arum say no, then Crawford can slowly build his name up by fighting the Hank Lundy’s of the 140lb division.

”No truth that Bud Crawford demanded $7 million to fight Manny Pacquiao,” said Arum. ”He is a consummate professional and always reasonable.”

So asking for $7 million for a Pacquiao fight isn’t reasonable. If the fight brings in 1 million buys, then why wouldn’t $7 million be reasonable? With Arum talking about “reasonable,” I’m wondering what would be reasonable for Crawford to ask for and expect to get for a fight against Pacquiao. Is it just $2 million or maybe $1 million?

Some would say that Crawford should take the small money because the fight will help make him a bigger name in boxing. I don’t believe that. What happened to Brandon Rios, Chris Algieri, Tim Bradley and Juan Manuel Marquez? All those guys fought Pacquiao, and none of them went on to become PPV fighters in their own right.

”Just to clear the air; I, Terence Crawford, never asked for $7mill to fight Manny Pacquiao. There was no conversation of me even fighting him,” said Crawford.
There it is from Crawford in him saying that he never asked for $7 million.

Here’s what trainer Freddie Roach said to RingTV.com about Crawford wanting $7 million for the Pacquiao fight:

”Arum told me last week it was Terence Crawford [for Pacquiao’s next fight in April],” said Roach. ”Crawford asked for $7 million. So maybe that’s too expensive.

So did Arum tell Roach that Crawford asked for $7 million for the Pacquiao fight or did Roach come up with that figure from hearing it from somebody else?

The reality is for a fighter to get a bounce from fighting Pacquiao, they need to have a fighting style that the boxing masses want to see. As far as I can tell, no one that Pacquiao has ever fought has gone to become a star just by fighting him. We saw how Oscar De La Hoya had the Midas touch to turn Floyd Mayweather Jr. and Pacquiao into stars after they both scalped him while he was at the end of his career, but no one was ever transformed into a star from fighting Pacquiao. That’s why it’s important for Crawford to ask for as much cash as possible for the Pacquiao fight, because it’s not going to turn him into a star by fighting him. Sorry, it’s not going to happen.

If Crawford whips Pacuiao, it won’t matter, because the boxing public knows he’s an old guy that is pretty finished. There’s no bounce that Crawford can get from beating up Pacquiao. I would expect that the 85-year-old Arum to know that, because it’s obvious to me. If fighters were turned into stars every time they beat Pacquiao, then Bradley and Marquez would be HUGE PPV stars today. They’re not though. Bradley isn’t a PPV guy and Marquez hasn’t fought in close to three years since 2014.

Arum says that he’s getting all kinds of offers from different places to host Pacquiao’s next fight.

“Offers are coming in from all over the world to host Manny Pacquiao fights. Australia, Russia, UK and U.S. What a way to go out,” said Arum.

Why is Arum talking about Pacquiao going out right now? I haven’t heard anything about Pacquiao retiring just yet. Why is arum talking about Pacquiao leaving the sport? If anything, Arum should be trying to keep Pacquiao around for as long as he can, because he clearly doesn’t have anyone in his Top Rank stable that can step into his shoes and become Top Rank’s next pay-per-view guy. What is Arum going to do? Is he going to start putting Crawford’s fights on PPV by shoving him down the throats of the boxing public whether they like it or not? Is it going to be one of those, ‘If we build it, they will come’ type situations with Arum in putting Crawford on PPV each time out?

Likewise, Arum can’t stick Top Rank fighter Vasyl Lomachenko or Oscar Valdez on PPV, because the boxing public isn’t going to buy fights involving those guys on PPV in my opinion. Arum can stick them both in with Pacquiao before he retires from boxing, and I don’t see either of them getting magic bounce that they need to for them to be transformed into PPV fighters. I think Valdez has the fighting style to be a huge star, but he’s fighting in the wrong division.

Boxing fans traditionally doing purchase fights on PPV to see featherweights headlining. Besides fighting in the wrong division to become a PPV attraction at super featherweight, Lomachenko doesn’t have an aggressive enough style to become a guy that the fans would pay to see. PPV fighters come along only rarely, and they’re usually but not always, sluggers. Floyd Mayweather Jr. was an exception to the rule due to his fast hand speed and incredible talent.

If I’m Arum, I’d forget about putting Crawford in with Pacquiao. Instead, I’d have Pacquiao continue to fight easy fights for as long as the money keeps coming in with PPV. I’d take Crawford, and rebuild his image, teaching him how to walk, talk, dress and most importantly how to fight in an exciting manner. That means no running, no changing stances, no counter punching, and no holding. I would then put Crawford in with Gennady Golovkin, Jermall Charlo or Saul Canelo Alvarez. I’d take risks with him to make him a bigger name, because he’s not going to become a star being wasted by fighting the likes of John Molina Jr., Hank Lundy and Viktor Postol. That’s stale match-making 101. You’ve got to take HUGE risks with Crawford to increase his star power while you still can. Putting Crawford in with a nearly 40-year-old Pacquiao is NOT taking risks. It’s boring and predictable match-making.


« Bellew is getting knocked out by Haye says McGuigan