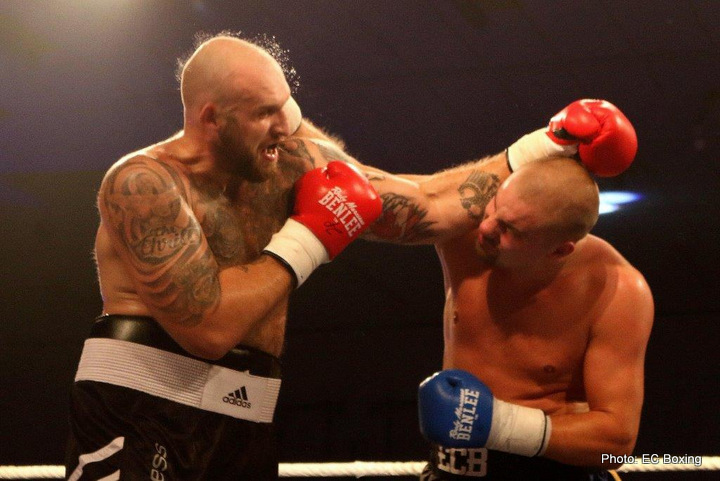 The Swedish heavyweight banger Adrian Granat has continuously proven himself to be one of the brightest heavyweight prospects in the world. In his last title fight he knocked Franz Rill out in round 6 and became the new IBF International Heavyweight Champion.

Granat was supposed to fight the Romanian boxer Bogdan Dinu in Granat´s hometown Malmö, Sweden on March 18th. However, Dinu changed his mind in the last minute and decided to take an easier fight against a boxer with much fewer fights. However, Alexander Dimitrenko (38-3, 24 KO`s), has declared that he is ready to take on Granat.

Granat:
“It’s been my dream for so long to fight in my hometown Malmö. Bogdan Dinu pulled out from the fight but I think Dimitrenko is way better than Dinu is. Dimitrenko has a lot of experience, but of course my goal is to win by way of knock-out.”

Promotor Erol Ceylan:
“We are really looking forward to this event and this fight in Sweden. Personally, I feel that Granat is ready for a title shot at WBC, IBF, WBO or WBA already now. But after another 2-4 fights he will not only be ready for the fight, he will then even be the favorite to win.”

Today Granat is the highest ranked heavyweight boxer from the Nordics, a couple of steps higher than the Finnish legend Robert Helenius (Boxrec;28th, WBC;29th, IBO;31st). Last week, Team Helenius announced in the Finnish media, that they could imagine a Viking fight between the two dominant heavyweight boxers from the Nordics and at the same time declared that Granat would not win such a fight.”

Granat:
“Already earlier I have clearly stated that I am willing to travel to Helsingfors to beat Helenius in his backyard anytime. I want to make it clear to everybody that there is only one true Viking in the Nordics in the heavyweight division – me. Helenius has had a great career, but now the time has come for a new generation boxer with more power to take over the ring. As my goal is to fight for at least the EBU-title later this year, I really hope Helenius can keep up with my speed on the ranking lists so that we would face each other in that EBU-title fight and make it the true Viking fight of the century. This is the fight many people in the Nordics would love to watch”

At the event in Malmö, local boxers Sven Fornling and Simon Henriksson will also fight. Other boxers on the undercard are Karo Murat and Igor Mikhalkin for example.

Golovkin: I can beat Canelo, he’s nothing »