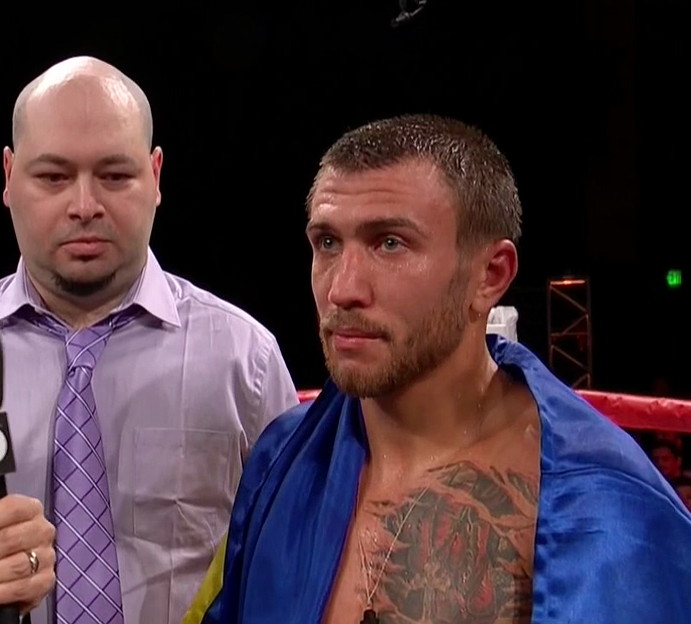 By Chris Williams: Much has been made about WBC/WBO light welterweight champion Terence Crawford (30-0, 21 KOs) being the guy that should be given the 2016 Fighter of the Year award, but I see WBO super featherweight champion Vasyl Lomachenko (7-1, 5 KOs) as being much more deserving of the award this year than him.

If you compare the wins that Lomachenko has racked up this year to that of Crawford’s, it’s clear that Lomachenko got the far better wins. Lomachenko has fought the better opposition and looked great in winning. Crawford only has one good win over quality opposition in beating WBO light welterweight champion Viktor Postol by a mostly boring 12 round decision. Crawford’s other two wins came over fringe level contender Hank Lundy and 33-year-old John Molina, who arguably didn’t rate the HIGH #2 ranking that the World Boxing Organization had for him at the time of their fight.

Here are the contestants for Chris Williams’ 2016 Fighter of the Year:

– Vasyl Lomachenko – During this year, Lomachenko beat WBO super featherweight champion Roman “Rocky” Martinez by a 5th round knockout. It was a great performance from Lomachenko, as he showed in that performance that he’s got both punching power and great defensive skills. The boxing skills that Lomachenko displayed against Martinez are second to none. Lomachenko’s other BIG win in 2016 came against previously undefeated former WBA ‘Super World’ featherweight champion Nicholas Walters in beating him by a 7th round knockout last November. Some boxing fans made a big deal about Walters not having fought for a year at the time that he faced Lomachenko. That’s true. Walters had been out of the ring for an entire year, but with the way that Lomachenko dominated him from started to finish, I think it’s pretty clear that he would have beaten him no matter how active he’d been in 2016. Lomachenko showed that he’s a far better fighter.

– Terence Crawford – In 2016, Crawford beat John Molina, Viktor Postol and Hank Lundy. Only one of those guys is a good fighter in my opinion and that’s Postol. It was a good victory for Crawford in beating Postol by a 12 round decision, but one win is not enough to be named the fighter of the year. Crawford’s constantly moving style of fighting made his fights against Molina and Postol nearly unwatchable for me. I thought both of those fights were very boring to watch due to Crawford’s movement, jabbing and frequent holding. Crawford didn’t fight like someone that deserves the 2016 Fighter of the Year award in my estimation. He fought more like someone who was doing the minimum to try and win. There was no real entertainment factor in any of Crawford’s fights this year.

– Gennady Golovkin – With wins over Dominic Wade and Kell Brook, Golovkin did not do nearly enough to win the 2016 Fighter of the Year. Brook, 30, is a good fighter – but at welterweight. He’s not a middleweight, and Golovkin should have rejected that fight and chose someone from the middleweight division. In the aftermath of his fight against Brook, Golovkin has received ZERO credit from the boxing public for his 5th round knockout win over the British fighter. Instead of receiving credit, Golovkin has been heavily criticized by the fans for the shots that he was hit with during the fight by Brook, and for how long it took for him to finally get the stoppage in round five. Some boxing fans even believe that Brook would have beaten Golovkin if not for suffering an eye injury that forced the stoppage of the fight. The judges’ scoring of the fight would seem to back up that view, as one of them had Brook ahead by a 39-37 score (3 rounds to 1), and the other two scored the fight even at 38-38 (2 rounds a piece). Could Brook have won that fight if it went the full 12 round distance and if he had not been injured. We’ll never know for sure. What we do know is Golovkin looked horrible, and his stock went down while Brook’s went up. Golovkin didn’t fight enough in 2016, and his opposition was not good enough for him to win the Fighter of the Year.

– Carl Frampton – This was a big year for the 29-year-old Frampton in 2016. He beat WBA super bantamweight champion Scott Quigg by a 12 round split decision last February to win his title. Frampton then moved up to featherweight and beat WBA Super World featherweight champion Leo Santa Cruz by a 12 round majority decision. If Frampton had looked impressive in those two fights, then he would be an easy choice for the 2016 Fighter of the Year award. The fact of the matter is, Frampton did not look good in either fight. Both of the wins were close and somewhat controversial. Quigg appeared to do enough to deserve a draw in their fight. Santa Cruz did enough in the minds of many boxing fans to deserve a win over Frampton, who was fighting in front of a large pro-Frampton crowd on the night of their fight at the Barclays Center in Brooklyn, New York.

– Roman “Chocolatito” Gonzalez – This year, Gonzalez defeated Carlos Cuadras and McWilliams Arroyo. Gonzalez did not look that great in either fight despite winning them both. Cuadras marked up Gonzalez’s face badly and hit him almost at will when he was throwing his flurries. Gonzalez’s win over Cuadras was not nearly enough for him to be considered for the Fighter of the Year award. Arroyo is a decent fighter, but not someone that is good enough to give Gonzalez an award for beating him.

– Anthony Joshua – The IBF heavyweight champion Anthony Joshua beat the following fighters in 2016: Charles Martin, Dominic Breazeale and Eric Molina. Let’s be honest here. Those are not the caliber of fighters that are good enough to give Joshua any kind of consideration for the ‘Fighter of the Year’ award for 2016. Molina and Breazeale were both bottom level fringe contenders. They weren’t top guys. They were fighters that were selected by Joshua’s promoter Eddie Hearn. It appears that Hearn chose those guys because they’re known by the hardcore boxing fans in the U.S. They’re not known by casual fans though in America. Joshua recently signed a contract with the U.S based cable network Showtime. It would seem that the Americans Breazeale and Molina were selected by Hearn to please Showtime. However, neither of those fighters were major players in the heavyweight division. For that reason, Joshua doesn’t deserve the Fighter of the Year award for 2016.