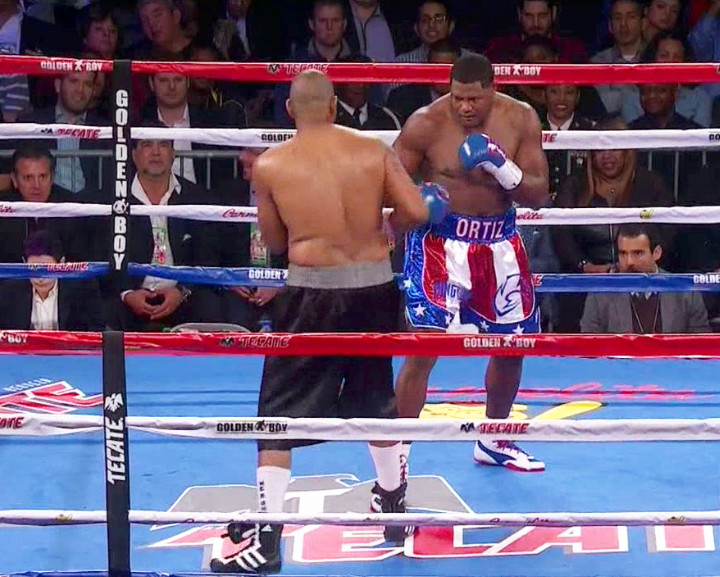 By Scott Gilfoid: Heavyweight Dave Allen (9-1-1, 6 KOs) says he’s going to stand right in front of unbeaten Cuban heavyweight Luis “King Kong” Ortiz (26-0, 22 KOs) and take the best that he can give at the start of their fight in a little over a week from now on December 10 at the Manchester Arena in Manchester, England.

I don’t know why the 24-year-old Allen is just going to let Ortiz hit him in the early going. Perhaps he wants to show the Cuban southpaw that he’s a tough guy who can take his best shots. Whatever the reason, I think it’s dumb, dumb and dumb.

Why take shots from Ortiz? If Allen lets Ortiz hit him a bunch of times, he might wind up too punch drunk to throw anything back at him if he’s able to make it to the second half of their scheduled eight round fight. It isn’t interesting that the fight is only an eight rounder. I don’t understand that.

The Ortiz-Allen fight is part of the Anthony Joshua vs. Eric Molina card on Sky Box Office pay-per-view. Both of those fights are seen as dreadful mismatches, as are other fights on the Matchroom Sport card between former super bantamweight champion Scott Quigg and Jose Cayetano, welterweight Conor Benn and Josh Thome, lightweight Katie Taylor and Viviane Obenauf, and super middleweight Callum Smith and Luke Blackledge. As far as I can tell, the only competitive fights on the card is the heavyweight match between Dillian Whyte and Dereck Chisora, super flyweight champion Luis Conception and Khalid Yafai and the light heavyweight clash between Hosea Burton and Frank Buglioni.

Dave Allen said to skysports.com this about his tough match-up against the 37-year-old Ortiz:

“Luis Ortiz is an old man and I’m going to make him look like an old man in there,” said Allen. “When he hits me, I’m going to stand there and smile at him. This is the fight that will catapult my career on the world scene. My sparring tells me that I have the ability to become world class, now this my time to go out there and show the world what I can do.”

Yeah, I guess Allen would be catapulted to the top of the world rankings if he beats Ortiz. It would be one of the biggest upsets in boxing if it were happened. Eddie Hearn, the promoter for Ortiz, might wind up crying crocodile tears if Allen beats him, because he just recently signed up the Cuban to his Matchroom Sport stable. Hearn has been talking about wanting to match Ortiz against Joshua in a heavyweight clash between two big and unbeaten heavyweights.

If Allen can take Ortiz’s scalp before Joshua can get to it, then that would be a HUGE buzz-kill for Hearn, because it would then make it pointless to match Joshua against Ortiz. Hearn could and probably will still match Ortiz and Joshua up against each other despite Ortiz losing to Allen, but what fan would want to pay to see a fight between those two after a loss like that. Hearn would need to rebuild Ortiz BEFORE matching him against Joshua, and he might need to go extra light with Ortiz to make sure he doesn’t lose again. I think Hearn was taking a major risk in signing Ortiz anyway, because the guy does not look young. I could understand Hearn signing Ortiz for one year, but no more than that, because I don’t think he has that much time left in his boxing career.

“I’m going to put it all on the line against him. I’m going to stick it on him early, smack him bang on the chin and see how it goes,” said Allen.

Well, if nothing else, the Ortiz vs. Allen fight should at least be interesting to watch if Allen is going to throw punches. He sure didn’t do that in his fight against Dillian Whyte last July. Allen just stood with his back against the ropes like a sparring partner and covered up for the full 10 rounds of the fight. Allen looked like he wasn’t mentally there for the fight for some reason.

I’m still trying to understand why he fought like that because he could have at least made a fight of it. All Whyte did was throw right hands. He barely used his surgically repaired left arm in the fight. It was the perfect opponent for Allen to fight to get a win. Before Whyte had shoulder surgery on his left shoulder, he used to be a big puncher with his left arm, but not since the surgery. Allen should have really put it on him for 10 rounds, because he might have lucked out and gotten a victory. Instead, Allen fought like a sparring partner in just covering up.

Allen can definitely punch a little. I wouldn’t be surprised if he knocks Ortiz out in this fight. Ortiz looked bothered by the handful of shots that Malik Scott hit him with in their fight last month in November, and Scott wasn’t even sitting down on his punches. Ortiz did not take the punches in a way that suggests that he’s got a good chin. Allen has more power than Malik in my view. If Allen can nail Ortiz with some punches on his chin, he could get him out of there on December 10. I don’t know what Hearn will do with Ortiz if/when that happens other than go back to the drawing board and see if he can sign another heavyweight to his Matchroom stable that he finds out there.