Molina says Joshua will be dancing if he makes a mistake 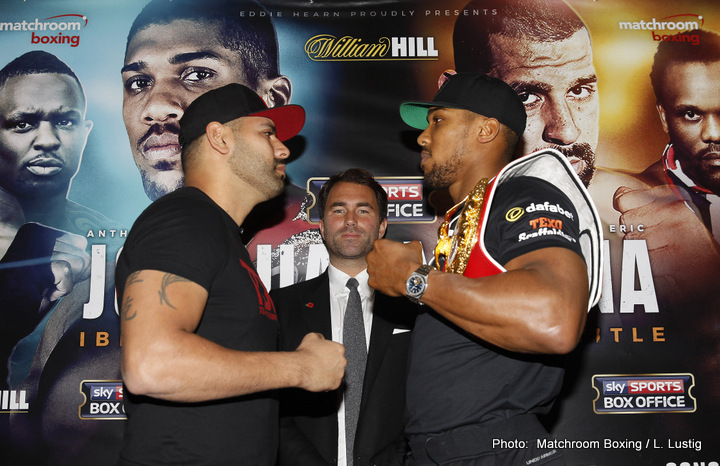 By Scott Gilfoid: American Eric Molina (25-3, 19 KOs) says he’ll be ready to take full advantage of any mistakes IBF heavyweight champion Anthony Joshua (17-0, 17 KOs) makes this Saturday night. Molina, 6’4”, says Joshua will be in trouble if he messes up inside the ring. Joshua tends to leave himself open quite a bit when he’s attacking his opponents unfortunately.

All it takes is one mistake by Joshua and he could be out on his feet from one of Molina’s hard power shots. Molina realizes what’s at stake in this fight. If he can score a knockout over Joshua, he’ll make a bundle of cash in the rematch.

“You have to do that,” said Molina to skysports.com about Joshua. “If you slip-up one second you’ll be dancing and the world will be talking.”

Rather than taking the high road and not firing back with any comments, Joshua had this to say about Molina: “I’ll make Eric look like a novice.”

Oh my, Joshua is really losing his cool. That’s not good news for him, is it? If Joshua is going to lose his temper so easily at what Molina is saying outside of the ring, then what’s going to happen inside the ring when he nails him with a big power shots earlier on in their fight? I’d hate to see Joshua fighting with anger rather than intelligence. It would play directly into the hands of the hard hitting 34-year-old Molina, making it easier for him to score a knockout over him.

We already saw Joshua stopped by Mihai Nistor in 2011 in the European Championships. Could Joshua be on the verge of being stopped again? I’m just saying.

“Oliver McCall my long-term mentor, he meant so much to my career, showing me things,” said Molina. “I always envision myself having that moment that he had here in England. He had that big win and it just shows the world that in this heavyweight division anything is possible.”
When you have the kind of punching power that Molina possesses, it makes him a real threat to beating Joshua on Saturday night.

The Joshua vs. Molina fight will be televised on Sky Box Office PPV in the UK and on Showtime Championship Boxing in the U.S. The fight will be taking place at the Manchester Arena in Manchester, England. Joshua has the hometown advantage in the fight, but that might not mean anything if Molina can get to his chin early.


« Felix Verdejo to fight on February 3