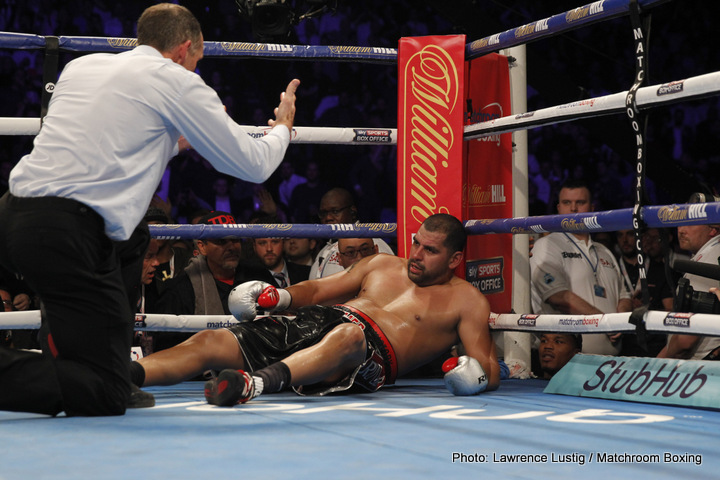 By Scott Gilfoid: 34-year-old Eric Molina (25-4, 19 KOs) says a combination of inadequate preparation and jetlag were the reasons for his 3rd round knockout loss to IBF heavyweight champion Anthony Joshua (18-0, 18 KOs) last Saturday night at the Manchester Arena in Manchester, England.

Molina was given only 39 days to prepare for the fight against the 27-year-old Joshua and five of those days were spent flying. It wasn’t enough time for him to prepare properly for the fight. That might explain why the 6’4” Molina didn’t throw a heck of a lot of punches in the fight before he was banged out in round 3 after getting dropped.

Molina said his plan for the Joshua fight was to take the punishment for three to four rounds before going on the attack. That obviously was not the greatest plan in the whole wide world. If Molina had bothered to look at Joshua’s past fights, they would have known that it would never work to let him unload on him for three or four rounds before getting started with his offense.

The best way to beat Joshua is to jump on him from round one the way that Dillian Whyte did. Molina was using the same blueprint that most of Joshua’s opponents had used in throwing nothing at him and just hanging on the ropes, hoping he’d punch himself out eventually. It was a dumb plan.

“Our plan was to weather the early three or four rounds and then open up,” said Molina via skysports.com. “Not every plan works every time, obviously. I went for it, but that’s boxing and it’s never easy to win on the road. Joshua is a great champion.”

Molina didn’t lose the fight to Joshua because he was on the road in England. He lost because he didn’t throw any punches, and wasn’t willing to come forward to risk getting hit. On the rare occasions that Molina did throw a shot, he would awkwardly throw a right hand from too far away, and the shot would miss. Molina should have come forward and thrown his power shots by being bold and not by being timid.

I don’t care how much time Molina had to prepare. He should have fought harder and let his hands go. It was the second time that Molina was given a crack at a world title after he was knocked out a year ago by WBC champion Deontay Wilder. If you know this is your second chance at fighting for a world title, then you’ve got to go for broke.

Molina failed to do that. A lot of heavyweight contenders never get a crack at a world title period. They go through their entire boxing career without getting a title shot, even though they’re ranked in the top 15 at times. Molina was so lucky to get two chances at a title. If he wanted to extend his luck, then he should have been willing to fight tooth and nail and go down swinging in the first two rounds at least.

I wouldn’t recommend that Molina run around the ring like welterweight Kell Brook did against middleweight champion Gennady “GGG” Golovkin if he wanted to have his stock raised in losing the fight. I don’t think Brook fought in a brave enough manner to have his stock raised. I Molina should have taken the fight to Joshua the way that Dillian Whyte did last year. Whyte at least tried to win the fight rather than just covering up on the ropes waiting for Joshua to lower the boom on him.


« Ward vs. Kovalev rematch possible for April or June

Terence Crawford given 90 days in jail »