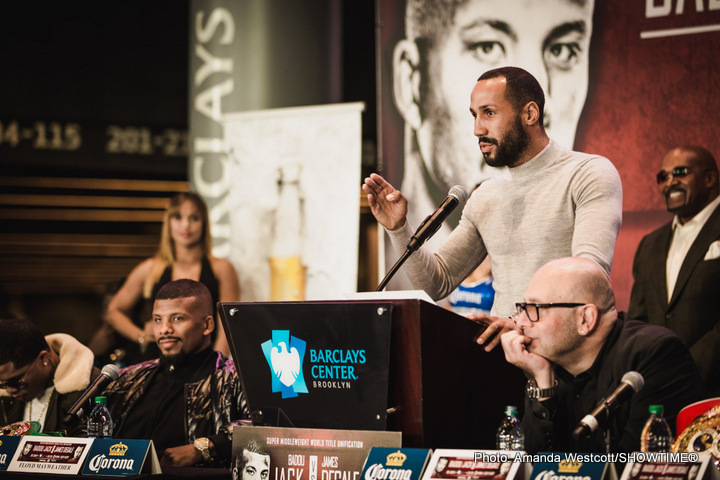 DeGale is also interested in fighting the winner of the rematch between IBF/WBA/WBO light heavyweight champion Andre Ward and Sergey Kovalev. DeGale prefers to fight Ward though, because he’s more of a boxer and he wouldn’t be trying to take him out in the way that Kovalev would.

Golovkin would be a really dangerous fight for DeGale for two reasons: One, DeGale has a bad habit of fighting off the ropes for long periods of each fight. Two, DeGale can’t punch at all, so there’s nothing he can do to keep Golovkin off of him. If DeGale backs up against the ropes against Golovkin, he’s going to get smashed to bits in short order.

We saw what happened to Kell Brook when he made the mistake of having a ‘last stand’ in the 5th round of his fight against Golovkin last September. Golovkin hit him hard with a body shot that caused him to go into the shutdown mode in not throwing anymore punches or blocking punches. Brook just too shots until his corner threw in the towel to have the fight stopped.

If DeGale does the same thing against Golovkin, then he’s going to get trounced. I’d like to see the fight because it would be an entertaining one, but I don’t think it would end well for DeGale. His lackadaisical fighting style would make him a sitting duck for Golovkin to destroy.

First things first, DeGale has a unification fight next month against WBC super middleweight champion Badou Jack (20-1-2, 12 KOs) on January 14 on Showtime Championship Boxing from the Barclays Center in Brooklyn, New York. DeGale has to win that fight before he can start thinking about fighting other champions.

DeGale has been talking like it’s a walk in the park for him, but the reality is this fight is a real toss-up. DeGale barely won his last fight against his mandatory contender Rogelio Medina last April. DeGale won, but it was hard fight for him due to the pressure that Medinca was putting on him. DeGale spent much of the fight with his back pinned against the ropes, taking heavy shots from Medina. DeGake did a good job of blocking and ducking many of Medina’s punches, but he was still hit quite a bit. Luckily for DeGale, Medina didn’t throw a lot of body shots. That’s what he should have done.

DeGale said this to Fighthub.com about his interest in fighting Golovkin:

When asked if he would like to fight the winner of the Sergey Kovalev vs. Andre Ward rematch, DeGale said, “100 percent. I can probably do middleweight. I’m a natural super middleweight. Going up in weight, I’d have to pick my opponent carefully. Ward though, I’d fight, because he’ll get in there and box you. He’ll give you a boxing lesson. I want the bigger fights where people think I’m going to lose. I want to fight Golovkin. We can do that. I’ll come down in weight. We can box at middleweight,” said DeGale.

Would Golovkin vs. DeGale sell in the UK? I think that’s the best place for such a fight, because it’s potentially a marketable fight in the UK, but DEFINITELY not marketable in the U.S. I don’t think DeGale is a draw in the UK though. Why is he always fighting outside of the UK? If DeGale can sell tickets in the UK, I think he’d be fighting there. As such, it might not be worth if for Golovkin to waste time fighting Degale. He might be better off fighting someone like Kell Brook again or Amir Khan. That would be a fun fight.

It’s unclear whether DeGale is under contract with Showtime Boxing. DeGale has been fighting on Showtime. If he’s under an exclusive contract with Showtime, then a fight against Golovkin would seem unlikely. Golovkin is with HBO. They’re probably not going to let GGG fight DeGale on Showtime, and I doubt that Showtime would let DeGale fight GGG on HBO. More importantly, I don’t know if there would be much interest from the U.S boxing public in a Golovkin vs. DeGale fight.

The casual boxing fans probably have no clue who DeGale is in the U.S. Yeah, DeGale has fought on Showtime a handful of times, but clearly not enough for him to become recognizable. To be honest, a fight between Golovkin and DeGale might not interest the normal fan any more than Golovkin’s mismatch against Dominic Wade earlier this year.

Golovkin might be interested in fighting the likes of DeGale in 2018 if he doesn’t get beaten by Badou Jack. If DeGale is doing well with his career, then it might be a fight that would interest GGG.

“The best facing the best. Number one against number two. Jack is a great fighter a very competitive one,” said DeGale via wbcboxing.com. “Yet, I’m very confident on my abilities, I think I’m the best in the division and I’m going to prove it inside ring,” said DeGale.

DeGale might be kidding himself by saying that his fight against Badou Jack involves the two best fighters in the 168lb division. I think Callum Smith and Gilberto Ramirez are probably the two best fighters at super middleweight right now. I can’t see DeGale beating either of those guys. Jack and DeGale are aging fighters that likely don’t have much time left as champions or top fighters.


« Tony Bellew could stay at heavyweight after Haye fight

Canelo’s next fight could be Saunders on May 6 »