Andre Ward wants Kovalev to admit that he lost 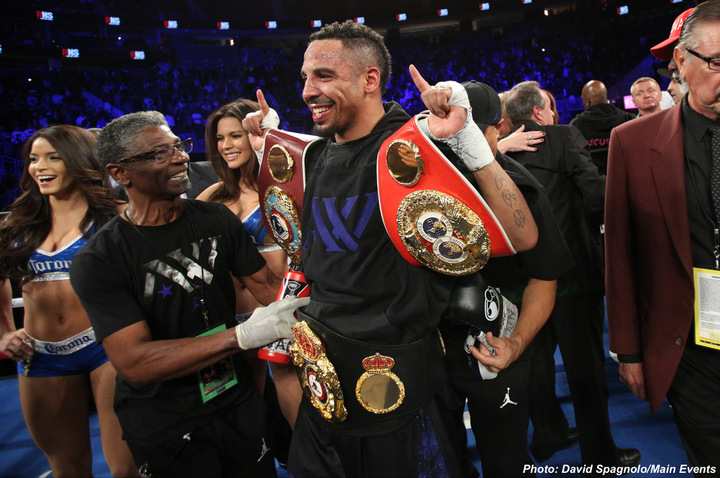 By Allan Fox: One month after his highly contested 12 round unanimous decision win over IBF/WBA/WBO light heavyweight champion Sergey Kovalev, Andre Ward says he thinks that Kovalev should admit that he was beaten by him in their fight on November 19 last month.

Ward says it makes Kovalev look bad that a month later he’s still making excuses and not willing to give him credit for his victory over him. Kovalev still believes that HE should have won the decision in that fight, and that the judges got it wrong in giving the 32-year-old Ward the victory by a 12 round unanimous decision by the scores 114-113 x 3.

Perhaps one reason why Kovalev isn’t willing to admit that he lost is because of the many boxing fans that back him in his belief that he was robbed in that fight. There are many fans who not only think that Kovalev should have won; they felt that he should have won by at least four to five rounds. Kovalev believes that Ward won no more than three to four rounds. In other words, Kovalev thinks the score for the fight should have been 9 rounds to 3 in his favor.

The question is how could three judges get it so wrong on the night? It’s hard to understand? One theory is the judges heard the screaming and shouting from the boxing fans that were in attendance in the fight, many of which that were rooting for Ward, and they unconsciously gave rounds to Ward based on the cheering rather than what was actually happening in each round. The fans were clearly cheering loudly for Ward in the fight. There’s no mistake about that.

Ward said this to Fox Sports Live about Kovalev and his win over him:

“It was a unanimous decision,” said Ward about his win over Kovalev. “It was a close fight, I’ll give him that. I think what happened was this guy kind of has had such a reputation for being a monster that they thought he was going to hit me and I was going to stay down. He did hit me, and I went down and I got up. As the smaller man, I took the fight to him, and I feel like I did what I had to do to close out the show the last 6, 7, 8 rounds. The judges got it right. He’s just disappointed. I know a guy is disappointed, him and his team right after the fight; emotions are still high. For a guy 3, 4 weeks later still not give you credit and still make excuses; it’s not a good look for him. If Kovalev won by 4 to 5 rounds, and I knew in my heart of hearts that this guy beat me, I got the kind of character where I’m going to tell him right after the fight, ‘Bro, I think you got the decision.’ He earned this. It just didn’t happen. It was a close fight that went my way, and I think at some point and I think at some point he’s got to own up to it. I’ve been in the game a long time, 12 years in the profession,” said Ward.

If Ward is waiting for Kovalev to give him credit for beating him, he could be waiting for a long, long time, because I do not see him ever admitting that he lost the fight. I don’t know why Kovalev would admit that he lost. When you look at the fight, it appears to me, and to a lot of other boxing fans, that Kovalev got the better of Ward in the vast majority of the rounds. Kovalev knocked Ward down in the 2nd round, and he won at least five of the first six rounds of the fight. For the judges to see the fight and give Ward almost every round from the 6th round on, it just looked like they weren’t seeing the same fight that many of the fans saw.

Floyd Mayweather Sr., the father of superstar Floyd Mayweather Jr., thinks that the Kovalev-Ward fight was one that could have gone either way. He says that Kovalev could have been given the win and there would be nothing you could say about it. Mayweather Sr. says that Ward does not look like the same fighter that he once did in the boxing skills department. Mayweather Sr. didn’t come out and say it, but he seems to think that Ward’s skills have eroded from the fighter that he was in the past. In looking at how Ward struggled against Kovalev, I think he’s right. Ward does NOT look like the fighter that he was five years ago when he won the Super Six tournament. He’s not as fast nor is he as mobile as he once was. If Ward continues to fight another two to four years, it’s going to be awfully hard for him to stay unbeaten, even if he chooses to milk his IBF/WBA/WBO light heavyweight titles. I don’t think Ward is going to do that, but I also believe it’s going to be very difficult for Ward to beat the likes of Artur Beterbiev and Oleksandr Gvozdyk. Those are two guys that Ward will have to tangle with at some point in the near future if he gets past Kovalev in the rematch, and I don’t know that he will.

Mayweather Sr. said this to Fight Sports Nation about how Ward doesn’t look like the same fighter that he once was:

“That fight was real close,” said Mayweather Sr. about the Ward vs. Kovalev fight. “I couldn’t call it for either one of them. I know one thing; he isn’t who I thought he was no more, because he was one hell of a fighter at one time. The guy was bad. He was like Floyd Mayweather. If they fight again and if the fight goes anywhere close to the way it went, they going to take that fight from Ward. Anyway close like they did last time, they going to take it. I never seen Ward look that bad, man. If they gave it to the other guy there wasn’t nothing you could say,” said Floyd Sr.

It’s not difficult to understand why Ward doesn’t look like the same fighter he once was. He’s been a part time fighter for the last four years. He’s not been active like other fighters in boxing. Ward also lost two years of his career with promotional and injury problems. That’s a lot of time for a fighter to be missing from the sport. You cannot expect Ward to be the same guy he once was after missing that much time.

The rematch between Ward and Kovalev is one that is going to be difficult to put together. Ward says he wants the rematch to be put together where it benefits him. Kovalev’s promoter Kathy Duva says the terms for the rematch are already in the original contract for their November 19 fight. The way that Ward is talking, it looks he wants a better deal than the one that’s in the existing contract. However, whether he can get a better deal is the big question. If they already have a contract, then there’s no reason for Duva to want to change the terms. Why would she?

“I beat the guy that nobody said I could beat,” said Ward about Kovalev. “My thing is everybody involved, let’s act like that happened, and everybody acts like that happened. Then there should be no problems putting together the type of fight and rematch that fans want to see and also benefits me as the champion,” said Ward.

Tony Bellew could stay at heavyweight after Haye fight »