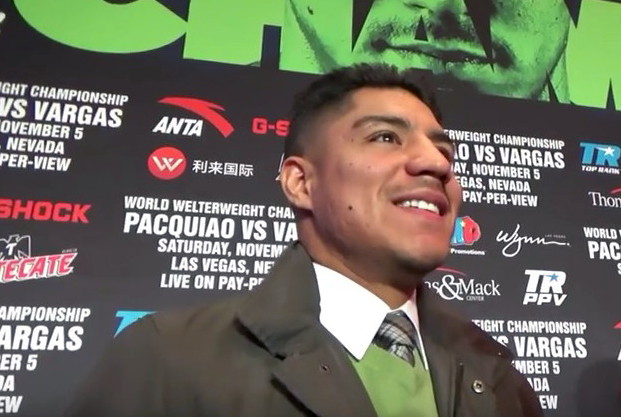 By Chris Williams: WBO welterweight champion Jessie Vargas says he’s going to surprise Manny Pacquiao with the many different he looks he gives him in their fight this Saturday night on Top Rank pay-per-view. Vargas wants to make sure he gives Pacquiao different looks by throwing punches from a wide assortment of angles in their fight at the Thomas and Mack Arena in Las Vegas, Nevada.

Vargas, 27, sees himself as a taller, younger version of Juan Manuel Marquez, a fighter that Pacquiao has struggled against in four fights during his career. Pacquiao arguably lost all four fights against Marquez, but was given two controversial decisions, as well as a controversial draw.

Vargas said this to esnewsreporting.com about his fight against Pacquiao on Saturday:
“I’m ready to fight,” said Vargas. “I’m ready to put my gloves on right now. I can’t wait. [He’s going to need to] Look out for every punch from me – left hook, overhand right, the jab, body shots, uppercuts, everything. I’m going to make sure I surprise Manny Pacquiao with different angles with different shots, and you have to adjust to an experienced fighter like that. At this level, you have to have the element of surprise, and I have that. Like you said, a younger [Juan Manuel] Marquez, but much taller, much longer, faster. There’s some similarities, but different fighter. We have two good shots we like to throw, and that’s the left hand and right. That’s the way I see it [this being Vargas’s coming out party]. That’s why I work my [expletive] off to be victorious on Saturday night, and to show the fans a great night of boxing. More than anything to show to perform well and show there’s a new star in this boxing game, and his name is Jessie Vargas. We plan to be successful this Saturday night,” said Vargas.

Vargas and Marquez are nothing like each other. Those are two different fighters. However, Vargas has the size, youth and more than enough punching power to beat Pacquiao. Looking at the two of them stand side by side at the final press conference this week made it pretty clear that Pacquiao has got his work cut out for him in this fight.

Beating the 5’6” Tim Bradley last April means nothing for Pacquiao. He’s going to need to prove that he can defeat a fighter that is four inches taller at 5’10” on Saturday night, and I don’t think that’s going to be possible. Vargas is too good at fighting tall, and will surely be looking to maximize his advantages. This means that we’re going to see Vargas staying on the outside, jabbing, nailing Pacquiao with shots coming in, and tying him up each time he gets in close.

If Vargas beats Pacquiao, it’s going to shake things up in the boxing world, as well as with Top Rank. We already know Pacquiao and Vargas’ promoter Bob Arum has been talking frequently about a fight between Pacquiao and fellow Top Rank fighter Terence Crawford. If Pacquiao loses to Vargas on Saturday night, then Arum will need to decide whether to continue to push for a Pacquiao-Crawford fight, or to make some adjustments in his goals by matching Vargas against Crawford.

It’s likely that Arum will still push for Pacquiao to fight Crawford, because Vargas will remain an unknown fighter due to this Saturday’s fight being only seen by a small amount of boxing fans. The Pacquiao-Vargas fight is on Top Rank pay-per-view rather than on HBO, and there won’t be a replay on regular HBO. That means there will not be visibility for the Pacquiao vs. Vargas fight behind the handful of fans that pay to see it. Pacquiao will still be a big star even if he gets knocked out by Vargas. That’s why I see Arum continuing to push for a fight between Pacquiao and Crawford. Arum won’t have enough time to have Pacquiao go into a rebuilding stage for a couple of years before he puts him in with Crawford.

With Pacquiao only having a small number of fights remaining before he retires from boxing, Arum will need to make a fight between him and Crawford immediately if he’s to make it at all. It’s important that the Pacquiao-Crawford fight get made due to Top Rank not having a replacement for Pacquiao in terms of a pay-per-view attraction. I don’t think Crawford can be turned into a pay-per-view fighter, even if he’s matched against Pacquiao four times a year for the next two or three years.

You’ve got to have a fighting style that the boxing fans want to see, and I do not see the counter punching and constantly moving Crawford having the style that the casual fans will want to see. Crawford has the kind of style that is more suited to fans that prefer to see defense and movement rather than exciting brawling. If you want to see brawling, then guys like Saul Canelo Alvarez, Gennady “GGG” Golovkin and Pacquiao are the ones that you want to see.

Vargas needs to make sure he punishes Pacquiao while he’s on his way in each time, because he’s going to be attacking frequently on Saturday night. Floyd Mayweather Jr. kept Pacquiao from attacking by nailing him with jabs and straight right hands. Pacquiao stopped attacking after a while, and the fight ended up being boring because Pacquiao lost the will to attack. Mayweather boxed beautifully for 12 rounds in showing off his amazing boxing skills. It wasn’t news to me that Mayweather clowned Pacquiao for 12 rounds, because I knew he would. Now we’re going to see if Vargas can do the same thing against Pacquiao. 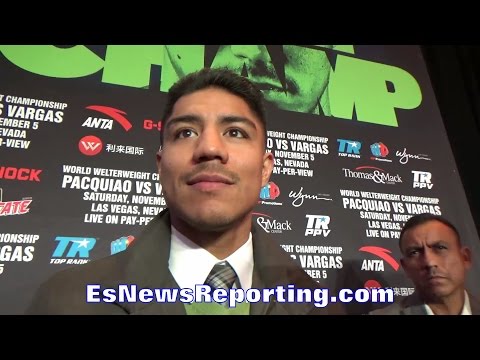