By Dam Ambrose: Former WBO welterweight champion Jessie Vargas (27-2, 10 KOs) seems to be in denial about his loss to Manny Pacquiao (59-6-2, 38 KOs) last Saturday night at the Thomas & Mack Center in Las Vegas, Nevada. Vargas lost the fight by a 12 round unanimous decision, and two of the three judges had it wide in favor or Pacquiao by a 118-109 and 118-109.

One judge had an oddball score of 114-113 in favor of Pacquiao. That would be the judge that Vargas would agree with, because he felt the fight was an even one. The boxing fans weren’t booing the judges’ decision afterwards, which means they agreed with the decision.

Vargas said this to the boxing media via Fighthype.com:

“I feel it was a close fight,” said Vargas after the fight. ”I threw more punches, which meant I was trying to look for the victory. I never gave up. I believe I was his equivalent with my speed, and that’s why he didn’t come in. I think the flurries could have made him look like he was up. The flurries weren’t connecting. It was a chess match. He wouldn’t come in for a reason. Why don’t you think he would come in? I was expecting him to come in more. He’s an offensive fighter. I was going to catch him coming in, but he was very respectful of my power. It was an even fight,” said Vargas.

Vargas was knocked down in the 2nd round by Pacquiao. Vargas says it was a flash knockdown. Never the less, Vargas stopped fighting aggressively after he was dropped, and that hurt his chances of winning. He wasn’t willing to go on the attack against Pacquiao. Vargas is wrong about his speed being the “equivalent” of Pacquiao’s last Saturday night. Vargas was clearly the slower fighter of the two. There’s nothing wrong with that. If he had taken the fight to Pacquiao, then he would have at least shown the judges that he was willing to go on the attack. He just wasn’t willing to do that for some reason.

When asked if he would like a rematch with Pacquiao, Vargas said, “Definitely, because I would look over the videos and see what I can correct and come back strong. I feel it was a close fight,” said Vargas.

I don’t think there’s much chance of Vargas getting a rematch against Pacquiao in this lifetime. If Pacquiao was younger, then I could see their mutual promoter Bob Arum sticking them together for at least two or three fights because of his habit of matching his Top Rank fighters against each other over and over. But with Pacquiao being 37, I see Arum looking to match him against Terence Crawford and Vasly Lomachenko for at least one fights a piece, possibly more. Vargas lost, and he’s going to need to rebuild his boxing career. The judges and the fans didn’t see the fight as a close one. It was pretty one-sided after the 4th round.

Vargas says he’s going to leave it up to Arum and his manager to decide who he’ll fight next. It wouldn’t be surprising if Arum puts Vargas back inside the ring with Tim Bradley, who beat him soundly last year. That’s at least one rematch that Arum can get. I don’t think he’ll be doing Vargas or the boxing public any favors by putting those two back together for an unwanted rematch. 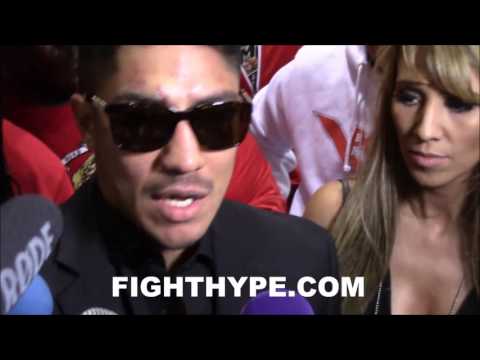 
« Crawford vs. Molina official for December 10

Is Kell Brook using IBF title as lure for Pacquiao? »