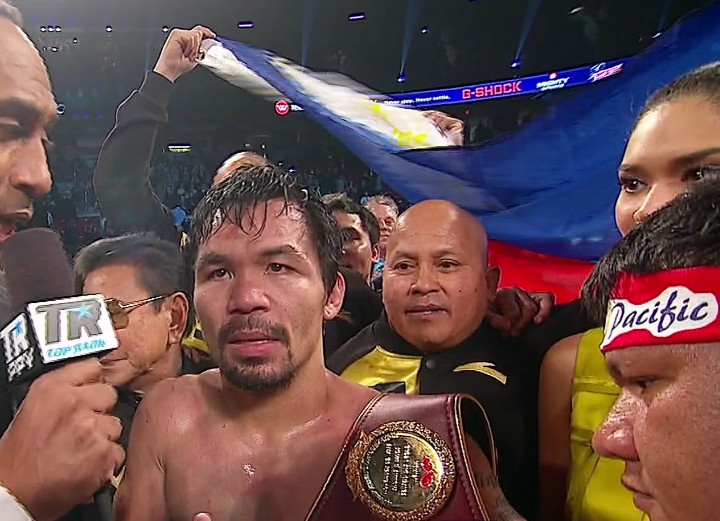 By Chris Williams: Manny Pacquiao’s recent fight against WBO welterweight champion Jessie Vargas (27-2, 10 KOs) has brought in less than monstrous pay-per-view numbers on Top Rank’s broadcast. Bob Arum, the promoter for Pacquiao and Vargas, is saying that the fight card brought in a little over 300,000 pay-per-view buys, according to RingTV. Arum is pleased with those numbers, even though they represent a drop off of approximated 100,000 buys from the 400,000 pay-per-view buys from Pacquiao’s previous fight against Tim Bradley last April on HBO PPV.

That fight was seen as a HUGE drop off in buys from the 4.6 million buys Pacquiao’s fight against Floyd Mayweather Jr. generated last year in May 2015.

It’s really not all that surprising that the Pacquiao-Vargas fight brought in such low pay-per-view numbers. Top Rank went it alone by not having the fight televised on HBO. It was also not a great fight, because Vargas wasn’t a well-known fighter with the casual boxing fans in the States. The hardcore fans were familiar with Vargas, as they know him from his one-sided 12 round unanimous decision loss to fellow Top Rank fighter Tim Bradley last year in June.

Arum said this to RingTV.com about the Pacquiao vs. Vargas pay-per-view results on Top Rank:
“They’re still coming in,” Arum said about the PPV numbers. “It’s harder to get without HBO. But about where the Bradley numbers are, around the same. A little over 300 (thousand). The numbers are what the numbers are.”

It’s true. The numbers are what the numbers are. I’m not sure if that’s Arum admitting that the card failed to do the respectable pay-per-view numbers of the past or what. When you look at how Pacquiao was bringing in over 1 million buys on a consistent basis from 2008 to 2012, and compare to what he’s done lately in his last two fights, it suggests a dramatic drop off.

I don’t think it’s because of Pacquiao having lost a ton of fans after his disappointing performance against Mayweather in 2015. I think it’s more of a case of stale match-making on Arum’s part. I’m talking about Arum putting Pacquiao in with Tim Bradley in a third fight, which the boxing public weren’t clamoring for, instead of matching him against the likes of Keith Thurman, Amir Khan, Danny Garcia, Errol Spence Jr., Saul “Canelo” Alvarez or Gennady “GGG” Golovkin. There are six good fighters out there that Pacquiao would likely bring in good pay-per-view numbers fighting, and Arum hasn’t made those fights for some reason.

Mayweather is obviously a possibility for Pacquiao in 2017. But there is no reason for Pacquiao to be fighting the likes of Bradley for a third time and the little known Vargas. Those were bad ideas. I would have never made those fights if I were Pacquiao’s promoter. I’d have worked with other promoters to put Pacquiao in good fights against guys that the boxing public wants to see.

Sorry, I don’t consider Terence Crawford as being someone that the casual boxing fans are interested in seeing Pacquiao fight. I think Crawford would be a step down from Pacquiao-Vargas or Pacquiao-Bradley 3. Of course, I think Arum is going to put Pacquiao in with Crawford in 2017, and I see that fight doing poor numbers. I think Arum will say something similar about ‘the numbers are what the numbers are’ instead of coming out and saying, ‘I shouldn’t have made that fight.’ That’s what I would say. But then again, I would have never made those fights. I think it was a crazy idea to try and sell Pacquiao-Vargas and Pacquiao-Bradley 3 to the boxing public. Those were not good fights. Vargas still had Bradley problems with his unfinished business with him. Bradley had already been beaten twice by Pacquiao.

Why try and sell a third Pacquiao-Bradley fight to the public. Arum could have selected Khan for Pacquiao’s fight last April instead of Bradley. Instead, Arum went with Bradley. Saul Canelo Alvarez snatched up Khan and fought him on HBO the next month in May 2016 and their fight brought in 600,000 buys.

That’s 200,000 more than the Pacquiao vs. Bradley 3 fight did with their 400,000 buys. I think Khan vs. Pacquiao would have brought in more pay-per-view numbers than the Pacquiao vs. Bradley 3 fight. Why? The fans had not seen Pacquiao fight Khan yet. He was new blood. Instead of sticking Pacquiao in with Bradley for a third fight in a tired rematch, Arum should have matched Pacquiao against Khan. If Arum makes the mistake of matching Pacquiao against Crawford next, I see it as the equivalent of crashing the Top Rank vehicle into the side of the road. It’s just a smart move.

It might help Crawford’s career a little, but it won’t help Pacquiao and it won’t bring in a lot of buys. Pacquiao needs a guy that can bring in the fans. Canelo or Golovkin would be my top choices. If not them, then the winner of the Thurman-Garcia fight, the winner of the Kell Brook vs. Errol Spence fight or Amir Khan. Those are some good options for Pacquiao. I would stick Crawford in with Jessie Vargas. I would try and work with promoters outside of Top Rank so that I could get Crawford the best opponents instead of only matching him against guys within the promotional company.

“I think it’s a good number,” said Arum about the estimated 300,000 buys for the Pacquiao-Vargas fight. “We’re pleased with it in the way we set it up. Everybody made a payday. You can’t expect in this environment to hit a home run every time…as long as you get a single or a double — fighters are happy with that.”

I don’t see it that way. I think the card would have done well if Pacquiao was matched against someone not named Jessie Vargas on that date. Vargas was not popular enough to make the fight a huge hit. Pacquiao needed someone that could bring in fans from their side. There was absolutely no drama in a fight between Pacquiao and Vargas. What did Arum expect the boxing public to do? Did he expect them to want to see Pacquiao fight a guy in Vargas who had recently been EASILY beaten by Bradley, a fighter that Pacquiao recently beaten with ease last April? It was just a dumb idea to make a fight between Pacquiao and Vargas.