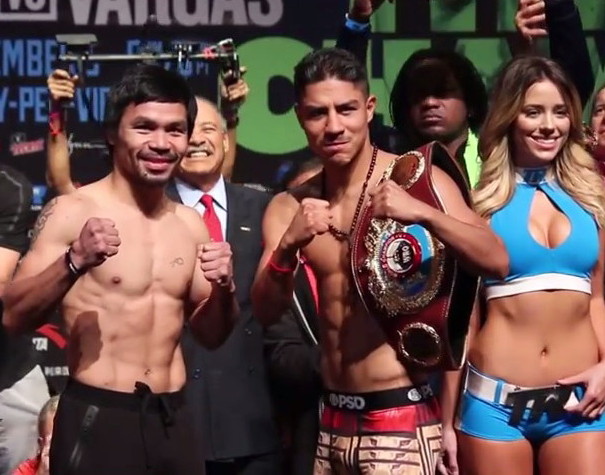 By Allan Fox: Former eight division world champion Manny “Pac Man” Pacquiao (58-6-2, 38 KOs) made weight on Friday with him weighing in at a light 144.8lbs for his comeback fight against World Boxing Organization welterweight champion Jessie Vargas (27-1, 10 KOs) this Saturday night on November 5 on Top Rank pay-per-view at the Thomas & Mack Center in Las Vegas, Nevada. The fight starts at 9 p.m. ET on Saturday night.

Vargas weighed in at 146.5lbs, and looked to be in great shape. There wasn’t much of a face off at all. Vargas looked like he was just happy to be there, and he was on friendly terms with the 37-year-old Pacquiao, as if the two were friends rather than foes Compared to past Pacquiao weigh-ins, this one had a much different feel to it.

There was no animosity at all on Vargas’ part. It reminded me a lot of how Joshua Clottey acted during his weigh-in for his fight against Pacquiao in 2010. Clottey looked like he was just pleased to be getting the fight.

The size difference between the 5’10” Vargas and 5’5” Pacquiao was HUGE to say the least. Vargas looked like he belonged in another weight class altogether despite the fact that he only weighed in a little more than Pacquiao. Vargas’ five inch height and reach is going to be a problem for Pacquiao if he can’t get in punching range. Vargas wants to try and take advantage of his size in this fight to control Pacquiao from the outside. If that doesn’t work, then you can expect him to tie Pacquiao up on the inside to keep him from getting his shots off.

Pacquiao will have a huge advantage in experience in this fight, as Vargas has only fought a small handful of talented fighters during his eight-year boxing career. Vargas is a previous WBBA World light welterweight title holder after beating Khabib Allakhverdiev by a questionable 12 round unanimous decision win in April 2014. Vargas defended the WBA 140lb title twice in beating Anton Novikov and Antonio DeMarco in unimpressive performances before giving up the title to move up to 147 to fight Tim Bradley last year in June 2015.

Bradley won the fight by a 12 round unanimous decision, but Vargas was able to hurt him in the last 20 seconds of the fight. It looked like Vargas was in a position to score a knockout when the referee working the fight Pat Russell made a mistake in halting the match with 10 seconds remaining. It was an unfortunate mistake that Russell made, but it’s unlikely that Vargas would have been able to get the knockout over Bradley, who appeared to have recovered from the shot that hurt him.

If Pacquiao loses this fight on Saturday, it’s difficult to imagine him continuing to fight. Vargas is not seen as the best fighter in the division. Losing to him would be a clear sign that Pacquiao needs to wrap up his boxing career to focus more on his political career in the Philippines.

—
The chief support for the Pacquiao vs. Vargas fight card is WBO super bantamweight champion Nonito Donaire (37-3, 24 KOs) defending his title against Jessie Magdaleno (23-0, 17 KOs). This is Donaire’s #1 WBO mandatory challenger. Donaire weighed in at 121.8 pounds. Magdaleno weighed in at 121.3 pounds. This is the 33-year-old Donaire’s second defense of his World Boxing Organization 122lb title.

Donaire previously defeated Zsolt Bedak by a 3rd round knockout in his last fight in dropping him three times last April in a mismatch. Fans wanted to see Donaire take on Guillermo Rigondeaux or fight Cesar Juarez again, but instead, Donaire opted for the safer option of fighting the light hitting Bedak.

Magdaleno, 24, has an unbeaten record, but he’s not fought any quality fighters as of yet during his six-year pro career. In his last five fights, Magdaleno has beaten Ray Perez (20-7), Vergel Nebran (14-10-1), Raul Hirales (22-4-1), Erik Ruiz (13-1) and Carlos Rodriguez (18-14-4). Magdaleno is a good fighter, but he hasn’t had the experience needed for him to compete against a fighter in Donaire’s class, and we’re going to find that out quickly on Saturday night when he gets inside the ring with him.

This fight has the makings of a mismatch unless Magdaleno can take the power of Donaire and punish him with his own shots.

Unbeaten WBO featherweight champion Oscar Valdez (20-0, 18 KOs) weighed in at 125.3lbs for his first title defense against his #1 challenger Hiroshige Osawa (30-3-4, 19 KOs). Osawa, 31, weighed in at 125.3lbs. Osawa is a good fighter, but he’s not in the same league as the 25-year-old Valdez. Osawa has past losses to Hideyasu Takahashi, Mitsuya Omura, JR Sollano, Daika Koide, and Akira Asada.

The good news is Osawa hasn’t lost a fight in the last seven years since his defeat to Omura in 2009. Osawa was held to a 12 round draw by Noriyuki Ueno in 2012. The major thing that Osawa has going against him in this fight is his lack of experience against quality opposition. Most of Osawa’s wins hve come against lesser opponents in record-padding fights. That’s not good, because he’s taking a considerable step up in competition in taking on Valdez. Osawa also doesn’t possess a lot of punching power, and that’s going to make it very hard for him to be able to compete against a fighter like Valdez.

#2 WBO flyweight contender Zou Shiming (8-1, 2 KOs) weighed in at 111lbs for his fight against Prasitsak Phaprom (39-1-2, 24 KOs). The 35-year-old Phaprom weighed in at 111.3lbs. Shiming, 35, and Phaprom will be fighting for the vacant WBO flyweight title. Shiming has already beaten Phaprom by a one-sided 12 round unanimous decision in 2012, so a victory is almost a certainty for Shiming in this fight. 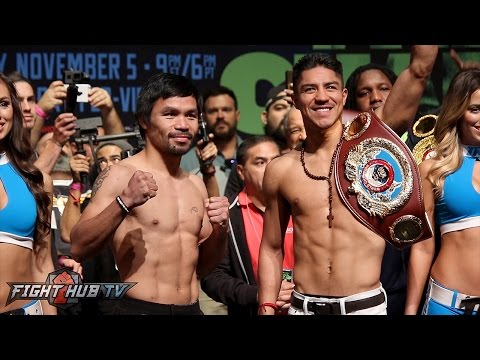