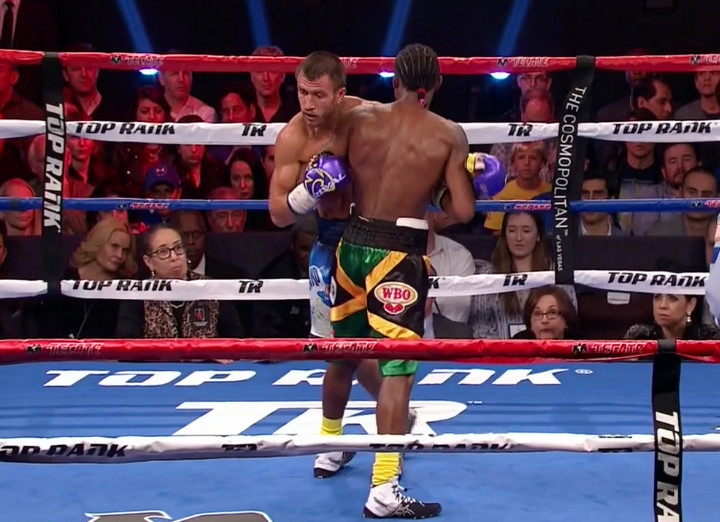 By Dan Ambrose: Nicholas Walters was no competition last night for WBO super featherweight champion Vasyl Lomachenko, who did a superb job of out-classing him until the former featherweight world champion quit after the 7th round had ended at the Cosmopolitan in Las Vegas, Nevada.

Walters had experienced enough one-way punishment at the hands of the skillful Lomachenko, and he didn’t want any part of going any further. After the match had ended, Lomachenko made it clear that he wants to fight a unification match against WBC super featherweight champion Francisco Vargas.

Lomachenko said, “I want Vargas.” However, Lomachenko’s promoter Bob Arum doubts whether that fight can be made, because Vargas is with Golden Boy Promotions, and he doesn’t think they’ll let him fight a talented guy like Lomachenko.

Arum wants to stick Lomachenko back in with Orlando Salido, a fighter who defeated him two years ago in 2014. Salido would likely take a rematch with Lomachenko for the right amount of money. I don’t think they’re going to get the 36-year-old Salido (43-13-4, 30 KOs) to agree to the rematch with Lomachenko for peanuts, but I won’t be surprised if that’s all they offer him. If Top Rank makes a lowball offer to Salido, they can correctly point out that he hasn’t won a fight in over two years since his win over Terdsak Kokietgym in September 2014. That was a long time ago. With Salido not having won a fight in 2015 or 2016, it’s going to make it tough for him and his management to negotiate a good purse split in a fight against Lomachenko. However, the money that Salido will be offered for a second Lomachenko match will likely be a lot more than what he’d get fighting anyone else.

There’s been no word about whether Golden Boy will match Francisco Vargas back up with Salido after their draw from earlier this year. That was a really hard fight for Vargas, who took a lot of punishment to the head from Salido. I wouldn’t be surprised if Vargas never fights Salido again. Vargas might be lucky if he holds onto his WBC title against anyone at this point. He went through a grueling fight with Salido, and his previous fight against Takashi Miura last year in November was no different. Vargas has fought only once in 2016. It looks like he’s being given a rest after his hard fight against Vargas.

“That’s unfinished business,” said Arum about the Lomachenko vs. Salido fight. “And then maybe I’d take him to England to fight [Terry] Flanagan for his lightweight title. I’ve been talking to [Flanagan’s promoter] Frank Warren about it.”

There is unfinished business between Lomachenko and Salido after their fight in 2014, but I’m not sure what meaning you’ll be able to get from the fight at this point. Salido is now 36, and hasn’t won a fight in two years. I don’t think it’ll prove anything if Lomachenko beats Salido at this point. He’s now older, and not the same fighter he was two years ago. The fact of the matter is Salido beat Lomachenko at the tail end of his prime.

If Lomachenko and Arum absolutely need a win over Salido in order for them to mentally let go off his previous defeat to him from 2014, then they should do it. I’m not sure that it’s worth it at this point. If Lomachenko was 36 and Salido 28, I don’t think a win for Salido over the aging Lomachenko would prove anything. Boxing fans would look at Lomachenko’s advanced age and figure it out that the match was made when he was too old to win. Arum is better off forgetting about Lomachenko’s loss, and realize that he fought someone that knew how to beat his style, which he obviously did.

Lomachenko couldn’t run around the ring focusing on being technical against Salido, because he pressured him and threw most of his punches to the body. Lomachenko does a great job of avoiding head shots, but he can’t move his body out of the way of body shots. Salido was able to throw body shots even when Lomachenko was on the outside. There was nothing Lomachenko could do in the fight other than hold, and he did a lot of that and probably should have been penalized for it.

Matching Lomachenko against WBO lightweight champion Terry Flanagan might play well in the UK in front of British boxing fans, but the fans in the U.S likely won’t care at all for that fight. Flanagan, 27, isn’t well-known in the U.S, and he’s not rated as highly as other fighters in the division. It doesn’t matter that Flanagan is a world champion. There are guys that would be tougher matches for Lomachenko such as IBF champion Robert Easter Jr., WBA/WBC champ Jorge Linares, contenders Yuriorkis Gamboa, Richard Commey and Rances Barthelemy. Those guys would all be tough. If all Arum can get is Flanagan, then so be it, but he wouldn’t be facing the best at 135 if he fought him.

You wouldn’t want Lomachenko to get a big ego from beating Flanagan and thinking he beat the best in the 135lb division, because he’s clearly not. If Arum turned around and threw Lomachenko in with Easter Jr, Commey, Gamboa or Barthlemey, he could be in for a rude awakening. I don’t think Arum will ever make any of those fights though. I see Flanagan as the only guy that Arum will match Lomachenko up against at lightweight unless he wants to stay in that weight class. There’s few names at 135 though. If Lomachenko wants to become a star in boxing, then he’s going to need to move up to at least 140 to get to the next level. Arum would then need to match Lomachenko against the likes of Terence Crawford for him to prove he’s the best at 140.

Arum brings up a good point. Vargas is currently a good money maker with him holding down the WBC super featherweight title. It’s unlikely that Golden Boy will make a fight between Vargas and Lomachenko if they’re not sure if he can win it. There’s no real point in making that fight. Arum wouldn’t likely make that fight either if he was in the same boat. You’re not seeing Arum match Pacquiao against Canelo Alvarez or Golovkin, even though those fights would make huge money. There’s no comparison to the kind of money Pacquiao could make fighting Golovkin and Canelo compared to the last two guys that Arum has stuck Pacquiao in with in matching him against his Top Rank fighters Jessie Vargas and Tim Bradley. Those two fights did roughly 300,000 and 400,000 pay-per-view buys a piece.

If Arum put Pacquiao in with Golovkin and Canelo, the fights would likely bring in three to five times more pay-per-view buys than his last two fights. That means more money, A LOT more money for Pacquiao and Top Rank. The problem is Pacquiao would likely get knocked out badly. So there it is. Arum isn’t going to put his fighters in matches that they have a high chance of losing, and Golden Boy is obviously the same way.

Vargas doesn’t match up well against a technical fighter like Lomachenko on paper. Vargas is coming off of a controversial 12 round draw against Orlando Salido last June at the StubHub Center in Carson, California. There were many boxing fans that saw the Vargas-Salido fight who felt that Salido should have won. I saw the fight and had Salido winning 8 rounds to 4. The scoring was bad in my view. I thought Salido punished Vargas and did a good job of beating him soundly. I was surprised when the judges scored the fight as a 12 round draw rather than a win for Salido.

I don’t think Arum is going to have Lomachenko take too much time before his fight against Pacquiao in 2017. We’ll likely see Lomachenko fight Orlando Salido next if the fight can be made, and then fight WBO lightweight champion Terry Flanagan in early 2017. If Pacquiao is interested in the Lomachenko fight, then the two of them will face each other in the second half of 2017. Arum has got to make the fight between Pacquiao and Lomachenko soon, because the chances of Pacquiao getting beaten by someone will increase as more time goes by. Arum chooses to match Pacquiao against Terence Crawford, then he could lose his next fight. That’s bad news for Pacquiao, Arum and Top Rank. It would likely mean fewer PPV buys for Pacquiao in his future fights, and Crawford probably won’t get enough new boxing fans from the victory for him to step in and replace the aging Filipino star as Top Rank’s PPV fighter. Arum needs to hold off on the Pacquiao-Crawford fight until the very end of Pacquiao’s career if he’s smart. Making that fight now will mess up everything.

Nicholas Walters told Arum he was hurt in 7th by Lomachenko »