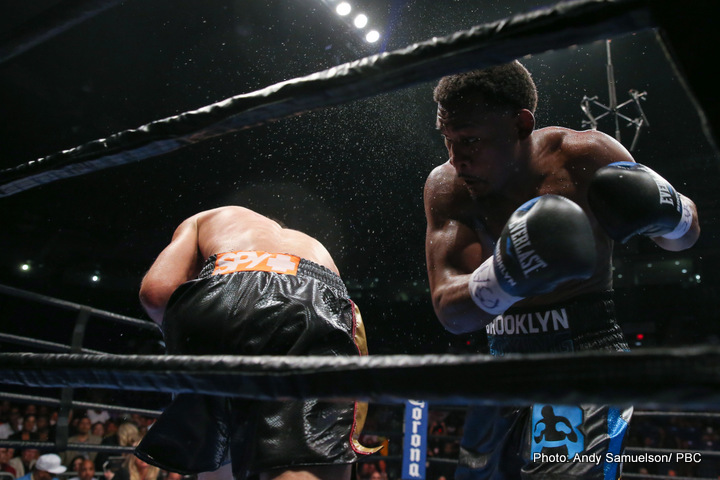 By Dan Ambrose: The World Boxing Association ruled against Daniel Jacobs’ management’s request for a 60/40 purse split for a fight against IBF/IBO/WBA/WBC middleweight champion Gennady “GGG” Golovkin (36-0, 33 KOs) on December 10 on HBO Championship Boxing. Thus far, Jacobs hasn’t officially pulled out of the fight with Golovkin yet, but there are many who believe that he’ll do that in order to avoid a knockout loss for little money.

If Jacobs pulls out of the Golovkin fight now, he’ll lose his WBA title, but he’ll be able to try and slide in next year after the smoke clears for the Golvokin vs. Saul Canelo Alvarez fight, which is supposedly taking place in September 2017.

The Golovkin-Jacobs negotiations are down to nine days before the October 22 deadline. At that time, it’ll go to a purse bid, and we’ll learn quickly whether the fight will take place or not. If Jacobs’ manager Al Haymon wins the purse bid, he’ll almost surely stick the fight on Premier Boxing Champions (PBC) by having Showtime televise the fight.

Golovkin’s move at that point might be to vacate his WBA title, leaving the WBA with the less popular Jacobs as their paper champion with him having to defend the belt against Alfonso Blanco next. What a terrible fight that’ll be, but it’ll be on par with Jacobs’ two previous fights against Sergio Mora. As far as the Golovkin-Jacobs negotiations go, it’s not looking like they’re going to come to an agreement before October 22.

It would be interesting to know what the magic number is that Jacobs and his team are looking for in order to sign for the fight. 75/25 obviously isn’t going to get the fight made. I wouldn’t be surprised if Jacobs’ management won’t sign for anything less than 65/35. They know they can sit it out and wait for Golovkin vs. Canelo so they can get a big payday against the winner of that fight. Golovkin would be overpaying Jacobs to the extreme if he gives him a 65/35 split, but he might need to.

If Golovkin wants Jacobs’ scalp to add to his collection, he’ll need to pay for it. Jacobs isn’t just going to give him his scalp for a small cut of the pie. He obviously knows that his career won’t be in great shape if he gets blasted out by Golovkin. That’s why I see Jacobs and his management pushing hard for as much money as possible for the Golovkin fight now. If they don’t get it, then they’ll pull out of the fight and wait on the Golovkin vs. Canelo fight to conclude before making a big play to fight the winner of that match.

The WBA didn’t side with the Jacobs’ management in requesting an increase from the 75/25 split that the WBA had designated for the Golovkin-Jacobs fight. The 60/40 bump up in payday would have been a huge amount of money in terms of Jacobs’ limited popularity. He would be getting almost even money for the fight despite holding just the WBA ‘regular’ belt and Golovkin holding four title and having been the WBA champion for six years.

“I think the WBA recognized that Gennady has made 16 title defenses,” Loeffler told RingTV.com on Wednesday. “He’s been the WBA champion for over six years, so we’re just happy they upheld their rules and hopefully it allows us to continue to move closer to make the fight with Jacobs. I think it’s always more beneficial for a promotion to try and work out a deal so both sides are satisfied.”

If Jacobs was allowed to get near parity with Golovkin, it would mean that there’s no real difference between the WBA ‘regular’ and ‘super’ titles that the organization assigns their dual champions in weight divisions.

Golovkin’s promoter Tom Loeffler needs to have a realistic outlook on the negotiations with Jacobs. If he really believes the fight can get made, he might end up overpaying Jacobs, who is clearly looking to use leverage to get the most money possible. Loeffler might be better off having Golovkin vacate the WBA title right now and leave it for Jacobs and Blanco to scrap over.

It’s better that Jacobs have a title later on down the line after Golovkin knocks out Canelo, and needs to go after Jacobs then. The money will be better for Golovkin then because he’ll have already beaten Canelo. Of course, if Canelo an Golden Boy Promotions aren’t serious about wanting to fight Golovkin in 2017, then that will throw a monkey wrench into GGG’s plans.

The WBC Is In Mourning; Bhumibol Adulyadej King Of Thailand Has Died »