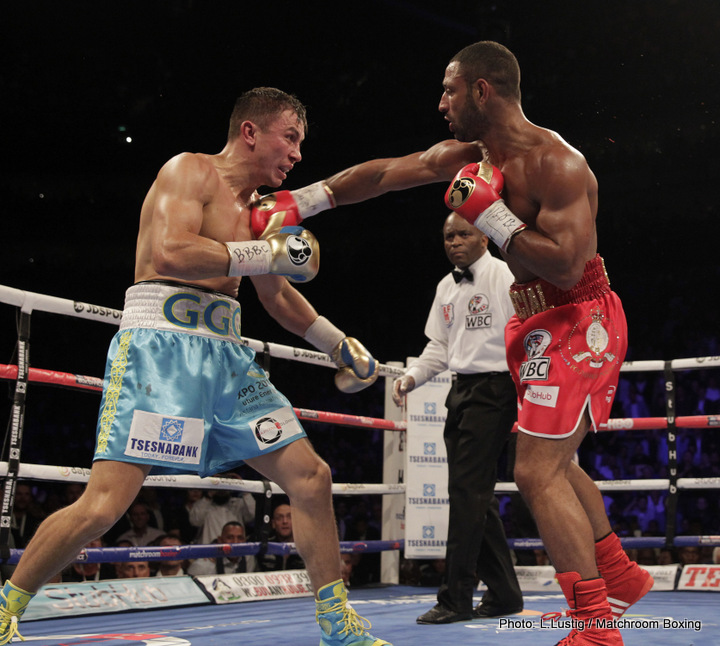 By Scott Gilfoid: If WBO middleweight champion Billy Joe Saunders is serious about wanting to fight the talented IBF/IBO/WBA/WBC middleweight champion Gennady “GGG” Golovkin in the near future, then the fight is there to be had as soon as GGG gets done with his WBA ordered fight against Daniel Jacobs.

Golovkin’s representative Oleg Hermann is interested in having him face Saunders if the interest is serious on the part of the British fighter. Hermann isn’t sure if Saunders really wants the Golovkin fight or if he’s just talking.

Never the less, Hermann would like to match Golovkin against Saunders after the Jacobs fight, which could take place possibly in November or December if the fight can get made. It still remains to be seen if the Golovkin-Jacobs fight can get made, considering that the two fighters are with different networks. Golovkin is with HBO and Jacobs with Showtime.

Golovkin is going to have his hands full with the 29-year-old Jacobs if that fight happens. I wouldn’t assume anything about that fight if I were Golovkin, as he could lose. Jacobs has very heavy hands, and he’s got the superior hand speed, height, reach and even athleticism in my view. At 29, Jacobs isn’t the same fighter that was knocked out in the 5th round by Dmitry Pirog in 2010.

Jacobs is a lot more mature, and he seems to be hitting harder now than he was back then. It’ll be a much tougher fight for Golovkin than his last fight against the smaller, weaker 5’9” Kell Brook. The 6’0” Jacobs has the size to give Golovkin a lot of trouble for as long as the fight lasts. I can’t see it going the distance either way, but Golovkin is going to know he’s been in a fight if he can’t get Jacobs out of there quickly.

“Our plan is to unify the titles but the WBA ordered us to fight Danny Jacobs so we have to focus on that,” Hermann said to skysports.com. “Then we’ll look at the unification fight with Saunders, who allegedly is interested in fighting Golovkin after our mandatory defence. For the Saunders fight, we want to book a Las Vegas arena but as of right now, we don’t take his words seriously. Our experience tells us that a guy who talks too much is not ready to fight.”

I get the impression that Saunders will be facing Saul “Canelo” Alvarez next in December, and he’s likely going to lose his WBO title in that fight. Saunders doesn’t have the punching power to compete against a guy with Canelo’s offensive arsenal, and I see it as a repeat of the Liam Smith-Canelo fight from last Saturday. I think Golden Boy Promotions is going to want to have Canelo win an easy title at 160 so that it validates his credentials at middleweight BEFORE they look to seriously try and make a unification match against Golovkin.

With Canelo winning a world title at middleweight, Golden Boy can potentially use that as another reason why he should get the lion’s share of the revenue from a fight against GGG. They can then push hard for a 90-10 split of the revenue and justify that lopsided split by pointing out that Canelo is the pay-per-view attraction and also a world champion at middleweight – if he beats Saunders. A fight against Saunders is a safe one for Canelo, because he doesn’t have enough pop in his punches or hand speed to really give him problems.
Golovkin is in a tough situation when it comes to the Canelo fight.

Even if Golovkin destroys Jacobs, he doesn’t have a lot of great fight options available to him. Sure, Golovkin can fight Chris Eubank Jr. in a UK fight, but after he beats him, he’ll be out of fights at 160 unless he agrees to the deal that Golden Boy is offering him.

Golovkin can move up to 168 and fight Gilberto Ramirez and James DeGale, but those might not be big fights. We’re still only talking about two fights for Golovkin. There’s no one else popular enough for GGG to fight at 168. Julio Cesar Chavez Jr’s career has kind of dropped off since his loss to Sergio Martinez in 2012, so he’s not really an option. Golovkin is too small to move up to 175 to take on guys like Andre Ward and Sergey Kovalev.

Golovkin might be better off doing what Canelo is doing by combing the weight classes below him to pick out opponents. Unfortunately, the 154lb division is barren of big names. Golovkin might have to try and get some more welterweights to fight him. Errol Spence Jr’s trainer Derrick James was talking recently about how he felt that a fight between them would be doable. Spence might be an option in the future. Tim Bradley is also a possibility. I can’t see Keith Thurman or Danny Garcia ever moving up to middleweight to fight Golovkin though.