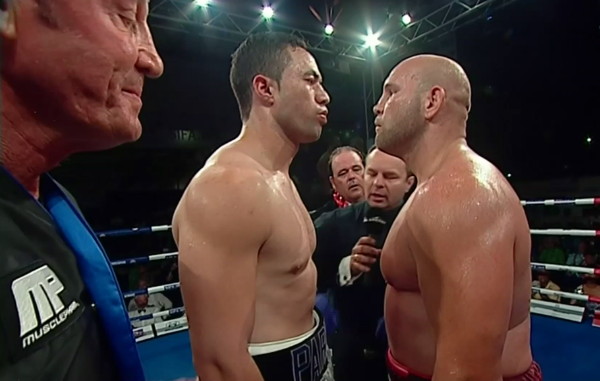 By Eric Baldwin: Unbeaten IBF heavyweight mandatory challenger Joseph Parker has more reasons to want to get inside the ring to defeat his next opponent Alexander Dimitrenko (38-2, 24 KOs) for their fight on October 1 at the Vodafone Events Centre in Manukau, City, New Zealand.

The 6’7” Dimitrenko said that Parker was fortunate to defeat Carlos Takerm in their International Boxing Federation title eliminator last May. Parker won the fight by a 12 round decision and looked to be the better fighter of the two by far. Parker is now the mandatory challenger to IBF heavyweight champion Anthony Joshua (17-0, 17 KOs).

Dimitrenko, 34, is obviously trying to get into the mind of the 24-year-old Parker to get him upset so that he comes out slugging and gets caught with something. Dimitrenko isn’t a huge puncher, but he might not need to be if Parker loses his head and starts swinging for the fences in round one of the contest.

“This is my home, this is my home country and he’s come here and disrespected me. I respect every fighter I get in the ring with. If I went to his home country (Germany) I wouldn’t disrespect him. (Carlos) Takam was a hard fight and I trained really hard for that. It was a close fight but Takam’s team and our team knew that we won. For him (Dimitrenko) to come here and disrespect us, I don’t like it.”
Parker is coming off of a 4th round knockout win over 40-year-old Solomon Haumono last July at the Horncastle Arena in Christchurch, New Zealand.

Dimitrenko is just a tune-up opponent for Parker to get him ready for the Joshua fight next year. This fight isn’t supposed to be a competitive one. Dimitrenko hasn’t faced a quality opponent since his 11th round knockout loss to Kubrat Pulev four years ago in 2012.

It’s hard to believe that Dimitrenko has let four year go by between tough opponents. You have to wonder what’s going on with Dimitrenko’s career, because there’s no way that he should have let four years slip by without stepping up agin and fighting at least a bottom level contender. He’s been fighting 2nd tier guys since his loss to Pulev.

Dimitrenko has the height to give Parker ready for the 6’6” Joshua but not the talent. Parker should have selected a better opponent if he wanted a real tune-up.