Canelo vs. Smith: Will this fight sell? 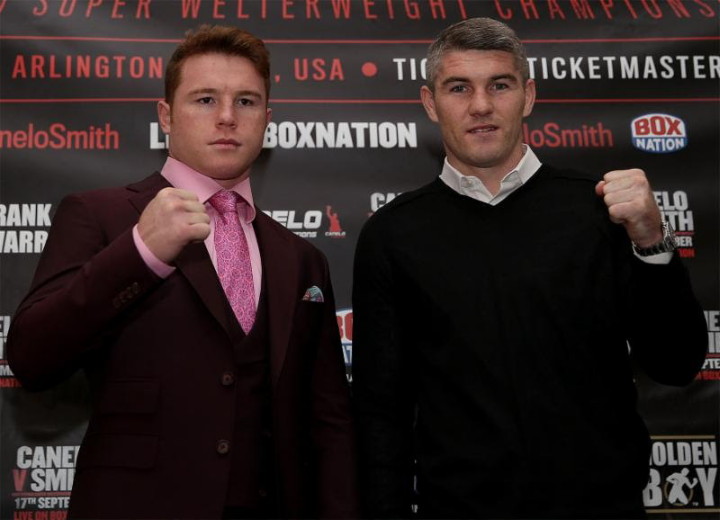 By Scott Gilfoid: Saul “Canelo” Alvarez has decided to dip down in weight to drain to 154 to fight little known WBO junior middleweight champion Liam Smith next month on September 17 at At&T Stadium in Arlington, Texas. HBO has given the Canelo vs. Smith fight the green light to be televised on pay-per-view with their network despite the 27-year-old Smith not being a recognizable name to the average casual boxing fan in the U.S.

Canelo and his promoters at Golden Boy Promotions might as well have selected some hopeless 2nd tier fighter for him to fight because it’s pretty much the equivalent of the guy that he’ll be facing next month in Smith.

What’s interesting is that Canelo’s promoter Oscar De La Hoya still believes that the Canelo-Smith fight will pack the AT&T Stadium on September 17. De La Hoya hasn’t made any comments about the projected pay-per-view numbers for the Canelo vs. Smith fight, but it wouldn’t surprise me if he thinks it will bring in a lot of buys. My guess is the fight will bring in a little over 100,000 buys, and wind up being one of Canelo’s lowest PPV fights since he first started out on his own as a PPV guy. At least in the past with Canelo’s fights against Erislandy Lara, Amir Khan and Alfredo Angulo on pay-per-view, they were fighters that had been televised in the past in the United States.

Liam Smith has never had one of his fights shown in the States, which makes him a rather odd choice for Canelo to be fighting at all, period. I don’t understand this fight but it appears that Golden Boy wants to validate Canelo by having him win a paper title while at the same time showing to the boxing world that he’s not a middleweight, he’s a junior middleweight.

The idea is that if boxing fans think Canelo is a junior middleweight, they’ll give him a break for not fighting IBF/IBO/WBA/WBC middleweight champion Gennady “GGG” Golovkin. I believe that’s the thinking process for Golden Boy to be aiming Canelo at Liam Smith rather than having him fight guys that are known by the American boxing fans.

“It’s the best stadium in the country. Canelo is the best fighter on the planet today, when you have the best and the best you can’t go wrong. We had the pleasure of visiting and it is beautiful. People are going to enjoy it,” said De La Hoya to esnewsreporting.com. “We’re going to pack the house and it’s going to be a lot of fun!” revealed the 1995 Ring Magazine Fighter of the Year.”

AT&T Stadium is a very, very nice stadium, to be sure. But as far as “the best and the best,” I don’t agree with that comment. I don’t consider Liam Smith the best or even the fourth past at 154. I’m just saying. I see Smith around No.10 or No.12 in the junior middleweight division. He’s certainly among the lower tier of the best, but definitely not the No.1 or even the No.5 guy at junior middleweight. I also don’t agree with Canelo’s comment about the Canelo vs. Smith fight is going to “pack the house.” It’s the wrong opponent to pack AT&T Stadium in Arlington, Texas. 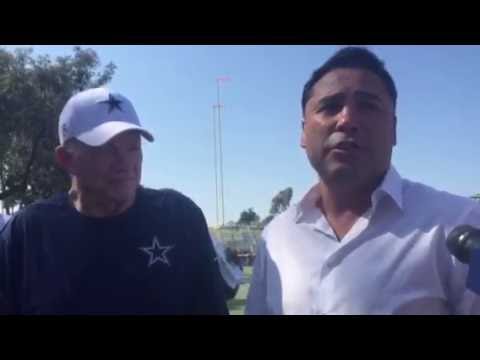 I’m surprised that De La Hoya could whiff this badly in selecting an opponent that would draw fans in the Texas area. I mean, it’s a state that is close to Mexico, so there’s a lot of Canelo’s boxing fans in the area that would like to see him fight, but I’m betting that they’ve probably never heard of Britain’s Liam Smith and it might not be a fight that they’re chomping at the bit to see.

“We’re proud of our stadium. When I had the Pacquiao fight, I had so many letters from Cowboys fans saying how much they appreciated boxing in Texas. Since we’ve announced the fight the ticket sales have been tremendous,” said AT&T Stadium owner Jerry Jones.