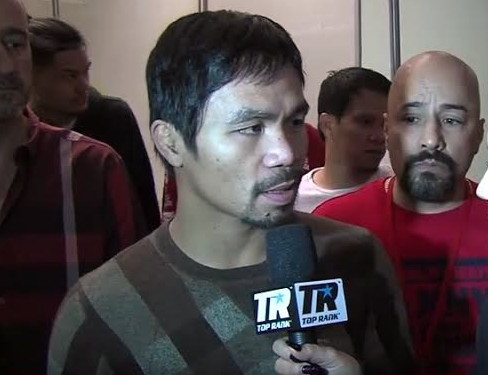 By Chris Williams: Top Rank promoter Bob Arum hasn’t given up on the idea of former eight division world champion Manny Pacquiao facing Terence Crawford or Jessie Vargas for his next fight on November 5. Arum promotes both Vargas and Crawford. Arum will be flying over to the Philippines on August 9 to have a one on one meeting with the Filipino star to take about is next fight in the U.S.

It’s unknown the 84-year-old Arum has Vargas and Crawford as Pacquiao’s potential opponent, because WBA welterweight champion Keith “One Time” Thurman is reportedly interested in facing Pacquiao, and that would appear to be a much better option for him than Crawford or Vargas, who aren’t big stars at this point and may never be.

Crawford isn’t even a welterweight. But with those guys being in Arum’s Top Rank stable, it makes it a very easy fight for him to make because he wouldn’t have to work with another promoter to negotiate the fight.

“I will fly over to Manila and meet Manny [Pacquiao] to discuss to him the details of his return bout,” Arum said to the Manila Times. “So far, they are still the candidates [Crawford and Vargas) to fight Manny. It’s going to be an absolute blockbuster fight either of the two. His last fight against Timothy Bradley was great.”

Pacquiao vs. Bradley 3 wasn’t a great fight, both in terms of action and pay-per-view results. The fight was one-sided from start to finish, and the PPV results weren’t anywhere close to the first two times these two Top Rank fighters met each other. In hindsight, I think it was a poor decision on Arum and Pacquiao’s part to make the third fight with Bradley, because it was tired old fight that the fans were interested in seeing. It was like having to pay to see an old movie that was brought to the theaters for fans. When you get retread fights staged over and over again, then you get diminishing returns. What was good one or twice, because completely forlorn the third time around. That’s why Arum should have matched Pacquiao against another fighter not named Bradley like Amir Khan or Adrien Broner last April. Putting Pacquiao in with Bradley a third fight was a fail in my view. I wouldn’t have made that move if I was Pacquiao’s promoter. I wouldn’t have had Bradley on my list period. I would keep Bradley for other fighters that he’s never faced before like Gennady Golovkin, Miguel Cotto or his good friend Terence Crawford. Those would be fights that would be perfect for Bradley.

I beg to differ with Arum on his opinion of Pacquiao vs. Crawford or Vargas as being a “blockbuster fight.” At this point in Pacquiao’s career, I think it will take a lot more than putting him in against Vargas or Crawford for it to be a blockbuster fight. We are talking about fighters that few casual boxing fans have never heard of.

Top Rank would need to educate the casual fans with tons of marketing for a Pacquiao vs. Crawford or Vargas fight for there to be much interest. Top Rank would need to introduce Vargas or Crawford to the fans in America by having a lot of HBO specials and perhaps a huge promotional tour. I don’t see that happening. Promotional tours cost money and I do not see Arum willing to have Pacquiao tour a bunch of the major cities in the U.S to drum up interest in a fight between him and the likes of Vargas or Crawford. Without a bunch of money being poured into the marketing of a Pacquiao vs. Crawford or Vargas fight, I think those fights would fail on PPV.

This isn’t Pacquiao vs. Floyd Mayweather Jr. where the promotion can be done on the cheap without a lot of marketing or specials on HBO. I think there would need to be a ton of money put into a Pacquiao vs. Vargas or Crawford fight for it to bring in even decent PPV sales. Do I see Arum doing that? No, I don’t. I think he would be counting on fans just purchasing the fight based on Pacquiao coming out of retirement. I don’t think that’s a good enough reason to expect high PPV sales. Fans are so used to fighters saying they’re retiring and then coming back. Retirement is like another word for a fighter going on vacation nowadays. 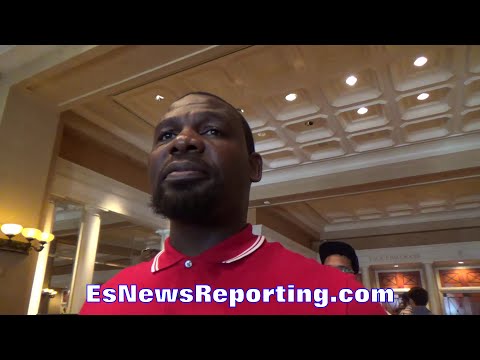 With Crawford, I don’t think it’s possible for a fight between him and Pacquiao to bring in a lot of buys no matter what Top Rank does. I see that as a fight that will bring in around the same amount of PPV buys as Pacquiao vs. Tim Bradley 3. That fight was said to have brought in around 300,000 PPV buys. That’s a far cry from the days when Pacquiao routinely averaged over 1 million buys. It would be up to Arum whether roughly 300,000 PPV buys would be a good enough number to put Pacquiao in with either Crawford or Vargas. If that’s a good number, then by all means, Arum should keep it in house and have Pacquiao fight one of those guys. But if Arum wants to have Pacquiao bring in a lot of PPV buys like in the old days, then I think the 84-year-old promoter will need to be a little more imaginative in the match-making he does for the 37-year-old Filipino fighter. If Arum wants to take full advantage of Pacquiao’s last remaining fights by maximizing the profits, then I think he has no other choice but to match him against someone like Saul “Canelo” Alvarez, Keith Thurman or Miguel Cotto. Those are the guys that would bring in a lot of PPV buys in my view.

Crawford fought last month in a pay-per-view fight on HBO against WBC light welterweight champion Viktor Postol on July 23. There are rumors that the fight did poorly on PPV. However, we haven’t received the final PPV stats as of yet, and it’s unclear whether we ever will. I doubt that the Crawford vs. Postol PPV numbers will be released before a fight between Pacquiao and Crawford is signed. If the PPV numbers are as low as they’re rumored to be, it would be crazy for them to be released now before Pacquiao has agreed to fight Crawford and signed for the fight. I can’t imagine Pacquiao wanting to face Crawford if he were to hear that his fight against Postol brought in a low number of PPV buys. Why would he? If Pacquiao wanted an opponent that could bring in low PPV numbers, he could fight anyone.