By Jim Dower: WBC heavyweight champion Deontay “Bronze Bomber” Wilder (36-0, 35 KOs) could find himself in a world of hurt on Saturday night in defending his title against #9 WBC Chris Arreola (36-4-1, 31 KOs) in thier fight at the Legacy Arena in Birmingham, Alabama. The two fighters weighed in Friday afternoon with Arreola weighing in 20 pounds heavier at 246.2 pounds compared to Wilder’s rail thin 226.2lbs.

Wilder looked very thin standing next to Arreola at the face off on the stage. Arreola looked perfect today. In the last couple of years, Arreola has come in either too light or too heavy looking. For this fight, he seems to have gotten his just right and he looks very powerful.
For Wilder, this is two pounds lighter than he was for his last fight against Artur Szpilka last January.

Wilder stopped Szpilka in the 9th round with a thunderous right hand to the head. However, Szpilka was able to connect with a number of his power shots in the first eight rounds. Arreola is a bigger puncher than Szpilka, and he could pull off an upset if he lands one of his left hooks clean.

Wilder doesn’t think Arreola will be able to get near enough to him for him to land his big shots. Arreola will get to Wilder sooner or later to land something big unless Wilder can score a 1st round knockout. It’s been a couple of years since Wilder stopped an opponent in round one. He knocked out Malik Scott in the 1st in 2014 and Sergey Liakhovich in the 1st in 2013.

Arreola’s last big win was in 2013 when he stepped Seth Mitchell in the 1st. It was a great win for Arreola, but he’s looked shaky since then in fights against Travis Kauffman, Fred Kassi, Curis Harper and Bermane Stiverne.

Unbeaten welterweight contender Sammy Vasquez (21-0, 15 KOs) weighed in at 146.8 pounds for his fight against Felix Diaz (17-1, 8 KOs). Diaz weighed in at 145.8lbs. Vasquez turned down fights against Errol Spence Jr. and unbeaten Jamal James. Spence already beat Vasquez twice when the two of them were in the amateur ranks. Vasquez says he wants to wait until the two of them are world champions before he faces Spence again. Vasquez thinks it’ll be a pay-per-view fight when they do face each other in the future. Vasquez might not get past the 5’5” Diaz on Saturday night. This is a tough opponent with just one loss on his resume to Lamont Peterson. 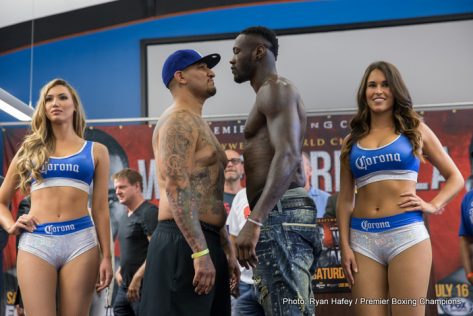 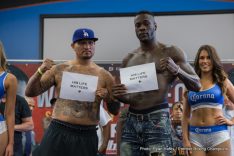 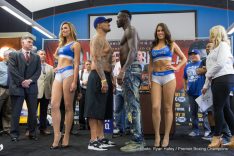 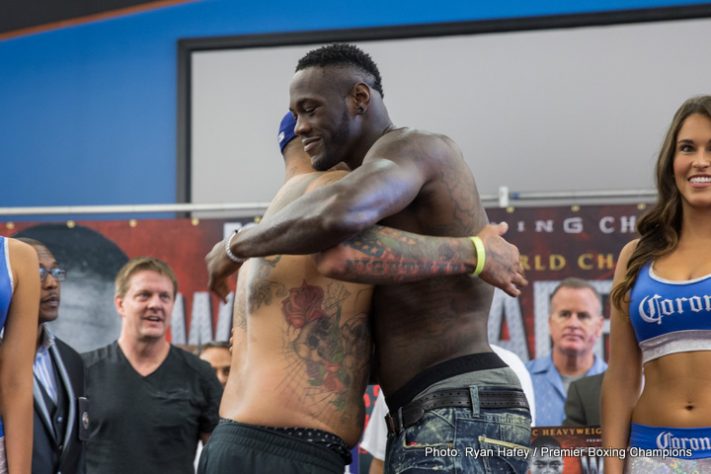