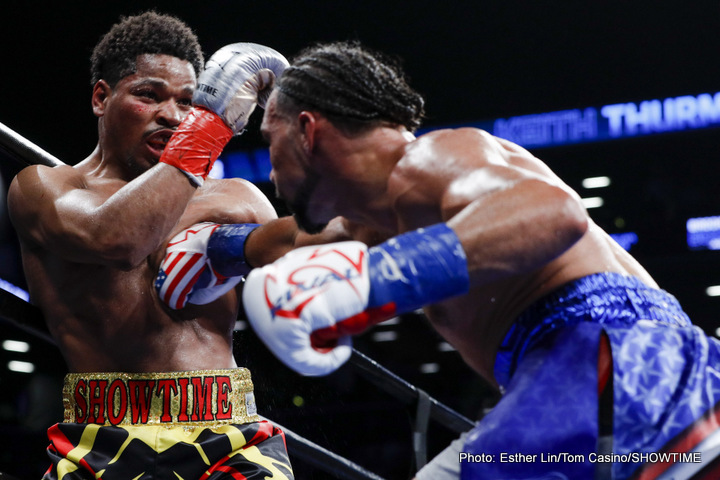 By Allan Fox: Former IBF welterweight champion Shawn Porter (26-2-1, 16 KOs) is hoping WBA World 147lb belt holder Keith “One Time” Thurman (27-0, 22 KOs) will give him a rematch so that he can avenge his 12 round unanimous decision loss from June 25. Thurman is Porter’s No.1 target for his next fight if he can get it. However, if Porter can’t get a second fight against Thurman right away, he’d like to get a fight against one of the following fighters: Danny Garcia, Andre Berto, Brandon Rios, John Molina or Ruslan Provodnikov.

Porter can be back inside the ring within the next three months, according to his trainer/father Kenny Porter. That’s an incredibly quick turnaround for a fighter that took as much punishment as Porter did.

Even for Thurman, it would be a fast amount of time for him to get back in the ring, because he took a lot of heavy shots from Porter and he wound up pretty lumped up around the face. Thurman won the fight by the scores 115-113, 115-113 and 115-113. It was close enough where Porter could have won if he’d fought just a little bit better in the last four rounds. That’s where Porter lost the fight, because Thurman was able to finish strong in the championship rounds to seal his victory.

“They can give us another title fight. He’s deserving of another title fight,” said Kenny Porter to fighthype. “I don’t want to sit around for 6 to 8 months. Shawn has already started back to working out. We will be ready to go in 90 days. Let me look at the list I made yesterday. Keith Thurman is number one on that list. Danny Garcia, Andre Berto, John Molina, Ruslan Provodnikov and Brandon Rios,” said Kenny Porter. 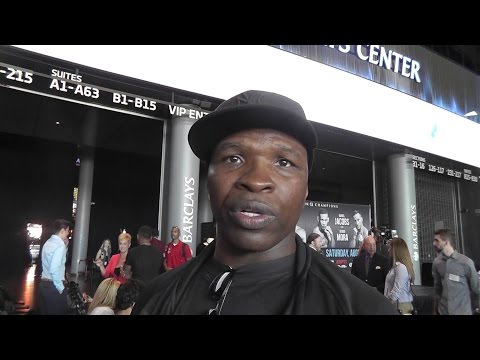 Provodnikov was just beaten by Molina, so he’s probably not going to be given the green light by his promoters to fight a difficult guy like Porter. #2 WBC Berto is in line for a title shot against Danny Garcia for his WBC title. There’s little chance that Berto will elect to fight Porter. Molina has nothing to gain by fighting Porter. Molina just beat Provodnikov by a 12 round decision. Molina will likely get a title shot against the winner of the July 23 unification fight between WBO 140lb champion Terence Crawford and WBC champion Viktor Postol.

Porter can probably forget about Brandon Rios as well, because he lost his last fight to former WBO welterweight champion Tim Bradley last November. Rios isn’t going to fight a dangerous fighter like Porter in his first fight back from that defeat. It would be a crazy idea for Rios to fight anyway good at this point because he’s looked so bad lately with the exception of his mismatch against Mike Alvarado last year.

Porter is probably going to be out of the ring for another extended period of time like last time before his manager finds him a good opponent. Porter sat out of the ring for 12 months after his win over Adrien Broner in June 2015. I think Porter will have to sit and wait for a long, long time before his management can find him someone good enough for him to get a big payday. The problem that Porter has is he’s too good for his own benefit, and he’s not a big enough star to get the top guys to want to fight him.

Thurman, 27, has already made it quite clear that he’s not going to fight Porter in his next fight. Thurman wants Danny Garcia, the WBC welterweight title holder. If Thurman can’t get the fight against him, then he would like to fight the winner of the unification fight against IBF champion Kell “Special K” Brook and WBO champion Jessie Vargas. Thurman is even saying he wants Floyd Mayweather Jr. or Manny Pacquiao, both of which are now currently retired. As for Porter, Thurman says that fight will always be there and he’s in no hurry to face him again.

Thurman wants to save the Porter fighter like a squirrel saving food for the winter. If Thurman goes through a dry spell and can’t get a top name to fight him, then he can always get the Porter fight at that time. It’s very likely that Thurman will wind up with none of the top fighters willing to face him for his next fight. Thurman will then need to face his #1 WBA mandatory David Avanesyan. Thurman may need to take that fight next anyway unless he can get one of the welterweight champions to fight him in a unification match.