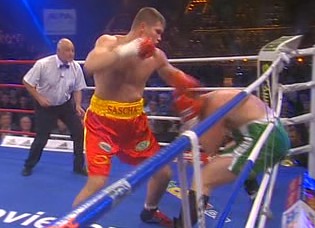 By Scott Gilfoid: Unbeaten #1 IBF heavyweight contender Joseph Parker (20-0, 17 KOs) is expected to have a stay busy fight announced this week for September against former contender Alexander Dimtrenko (38-2, 24 KOs). Parker, 24, is staying active while he waits for an eventual world title shot against IBF heavyweight champion Anthony Joshua. It’s still not official yet that Parker will be fighting Dimitrenko next, but it’s expected to be announced this week. It’s a decent warm-up fight for Parker. He could do worse.

The Joshua-Parker fight could take place as early as November; although it’s more likely to take place in early 2017. Joshua’s promoter Eddie Hearn is keen on having him squeeze in another voluntary defense before he defends his IBF strap against the hard-hitting 6’4” Parker.

Parker looked good in obliterating Solomon Haumono by a 4th round knockout last week on July 21 in New Zealand. Parker showed good punch variety and excellent movement before lowering the boom on the 40-year-old Haumono in round four.

There was some controversy about whether the referee had pulled the plug on the fight prematurely after Haumono appeared to get up before the count of 10. But let’s be real about this; if the referee had let Haumono continue to fight, Parker would have likely chopped him down straightaway with his first punch after the fight resumed. It was better for it to end the way it did for Haumono with him getting stopped without getting badly hurt.

The 34-year-old Ukrainian Dimitrenko, 6’7”, is a little bit taller than the 6’6” Joshua, and has a better jab than him. Dimitrenko reminds some boxing fans a little of former heavyweight champion Wladimir Klitschko in the talent department. However, Dimitrenko’s career has been nothing like Wladimir’s. Dimitrenko was fed soft opposition for the first eight years of his career before being stepped up a level in being put in with Eddie Chambers in July 2009. Dimitrenko lost that fight by a 12 round majority decision. It was a one-sided fight with the 6’1” Chambers totally schooling Dimitrenko despite giving up six inches in height. I’m not sure which fight the referee was watching that scored it 113-113, because that was a very weird score for such a one-sided fight.

Dimitrenko went back to fighting weaker opposition for a while after his loss to Chambers, and he put together a nice little three-fight winning streak until taking the bitter sweet taste of defeat once again, this time against Kubrat Pulev in 2012 in losing by an 11th round knockout. The fight was totally one-sided from start to finish, as Pulev was too talented for Dimitrenko, and he made him look pretty much like a punching bag in that fight. Dimitrenko has won his last six fights since the loss to Pulev, but he’s done it against weak opposition. The good news is Dimitrenko has a winning streak going once again. It might help his confidence a little when he gets inside the ring with Parker. Goodness knows, Dimitrenko is going to need his confidence 100 percent for him to have a chance against Parker.


« Crawford: I could have pressed the gas but why?