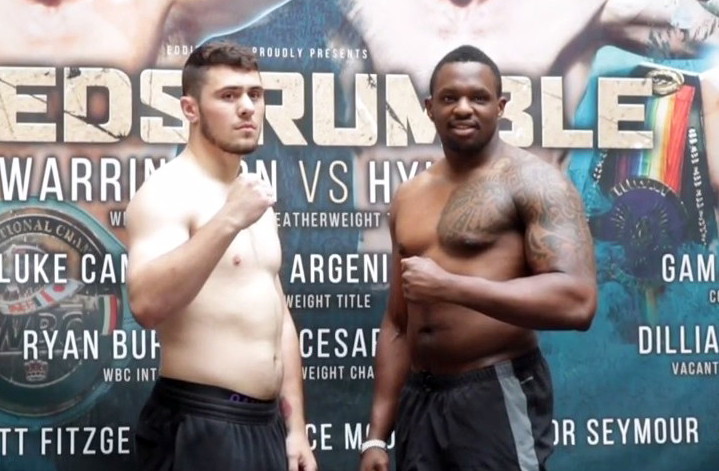 By Scott Gilfoid: Heavyweight Dillian Whyte (17-1, 14 KOs) expects his fight against unbeaten domestic level fighter Dave Allen (9-0-1, 6 KOs) to be an exciting one while it lasts when the two of them start trading bombs tonight at the First Direct Arena in Leeds.

Whyte, expects, plans on taking Allen out in impressive fashion and then moving forward with his career to eventually win a heavyweight world title. First things first; Wyte needs to get past Allen tonight and look good in doing so.

“I’m up there with the top fighters in the world,” Whyte said to skysports.com.
“Unfortunately, I have had a couple of setbacks in my career with injuries in the last couple of years. They seem to be holding up now and this time next year I’ll definitely be a world champion.”

The truth of the matter is that Whyte is NOT up there with the other top heavyweights in the division right now; at least terms of rankings. Whyte isn’t ranked in the top 15 right now by any of the sanctioning bodies, and he obviously has a lot of work to do for him to get ranked high enough to get a title shot.

The only way Whyte gets a title shot is if IBF belt holder Anthony Joshua chooses to fight him. My guess is Joshua and promoter Eddie Hearn will look to make that fight very soon before Whyte’s left shoulder is at full strength, if it ever does get back to where it was before the surgery. Whyte looked very good before he injured his shoulder last year. His left hook was power, and it worked with his right hand power.

However, he hasn’t looked good since before his fight against Brian Minto last year in September. It was at that time that Whyte began to fight one-handed with just his right. Whyte tried to use his left in his fight against Joshua last December, but he further hurt it in the 2nd round after staggering Joshua. 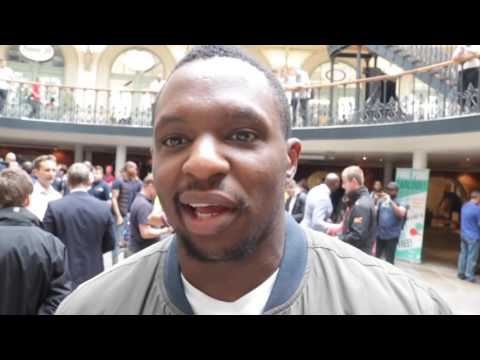 You can just imagine what Whyte would have done to Joshua had his left shoulder been at full strength for an entire fight. We might have seen Joshua staggered in every round of the fight and put down two or three times like in his fight with Whyte in 2009. Whyte was injury free back then, and he belted Joshua all around the ring in beating him.

“He [Allen] has made a lot of noise and stuff, I’ve responded to him a couple of times and I’m expecting a decent fight,” said Whyte. “He’s undefeated. He’ll try to protect his record and it’s near his hometown, so he’ll try and put up a good fight in front of his fans.”

Allen is a basic come forward slugger that tries to take you out with heavy shots from round one. There’s no real finesse in Allen’s game. He just comes out swinging for the fences from round one, hoping for the best. In Allen’s last fight against journeyman Jason Gavern last March, Allen was getting nailed a lot in a fight that was pretty competitive. However, Allen wore Gavern down with rabbit punches in the 4th and ended up getting a stoppage. I thought Allen should have been penalized for the rabbit punches, but the referee working the fight Howard John Foster failed to take points off.

Gavern chose not to take it to the gutter and start throwing his own rabbit shots, so eventually he was stopped. While some boxing fans have been crowing about Allen’s win over Gavern, as it was a great performance, the reality is Allen did not look good at all. I mean, if you consider having to go tooth and nail with 39-year-old Gavern as an impressive accomplishment, then that’s hard for me to understand. If Allen was really a true talent, he should have been able to obliterate Gavern in short order and totally dominate him like Deontay Wilder did in the past. Deontay basically toyed with Gavern until stopping him.

Whyte can’t afford to struggle against Allen or lose to him tonight, because this guy is too far down on the heavyweight pecking order to be losing to. Allen isn’t a ranked heavyweight and for good reason; he’s not particularly talented. If Whyte is really going to be going somewhere in his career, he’s got to be able to beat guys like Allen with ease. I mean, Whyte shouldn’t even get out of 1st gear tonight in defeating Allen if he’s a true world class heavyweight because this isn’t a guy that the top dogs would struggle against.

If Whyte is for real, he’ll obliterate Allen in short order and make it look effortless. If Whyte isn’t for real, then he’ll go life and death with Allen and have to struggle greatly to beat him. It’ll be sad to see but what can you do. Either you have the talent to be among the top heavyweights or you don’t. Whyte needs to show that he can beat the bottom feeder type heavyweights like Allen so that he can eventually get ranked in the top 15 and get a world title shot against one of the champions, preferably Joshua.

I see Allen going right after Whyte from the 1st round looking to take him out. That’s the only way that the 24-year-old Allen knows how to fight. He’s got good size at 6’3″, 237¼ pounds, but he’s not mobile and he doesn’t have much of a jab. Allen is going to after Whyte and the two of them will stand and slug in the center of the ring. I don’t think Allen will survive for long with that game plan, even with a one-armed Whyte. I see Whyte backing Allen up to the ropes and nailing with right hands to the head and body to put him down on the canvas. Allen will likely get back to his feet, but the referee will pull the trigger and stop the contest in one of those quick stoppages that we’ve grown accustomed to seeing.

Ward vs. Brand next Saturday »