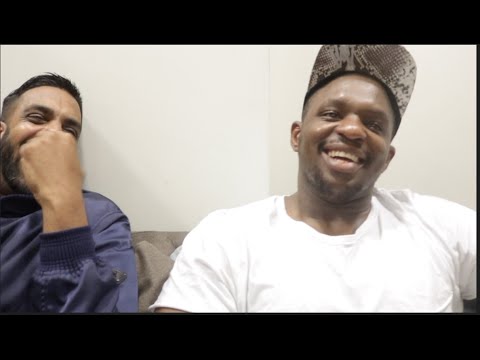 With this victory, Whyte captured the vacant WBC International title.

Allen never really got un-tracked with his offense. He was following Whyte around the ring, taking head shots, and not letting his hands go. Allen looked like a sparring partner more than an unbeaten fighter. It could be that Allen has a sparring partner’s mentality, because he just did not look like a good fighter.

The fight looked like it was fought underwater by two slow guys, because they were both so incredibly slow. Whyte was totally dependent on his right hand for all of his offense. It was strange to look at because his left arm was totally useless. Whyte even turned southpaw so that he could use his right hand for jabbing. When I saw that, I figured out that his surgically repaired left shoulder still isn’t back to full strength because he couldn’t even use his left.

Whyte fought largely the entire 10 round contest using just his right hand. His surgically repaired left shoulder did not appear to be strong at all, as he rarely used his left hand for anything other than throwing limp jabs. Before Whyte injured his left shoulder last year, his main weapon was his left hook. But ever since he’s come back from shoulder surgery, he’s not been able to use his left hand. It’s kind of sad to see really. It’s unclear whether Whyte will ever regain the full strength in his left shoulder.

Right now, I don’t think Whyte can defeat the likes of Dereck Chisora later this year. I wouldn’t recommend that Whyte take that fight or a fight against 47-year-old Antonio Tarver. Whyte won’t beat the likes of Chisora or Tarver fighting with just his right hand. Whyte’s right isn’t strong enough.

Whyte’s left shoulder issues reminds me of Jeff “Left Hook” Lacy after he suffered a rotator cuff injury many years ago. Many fans only know of Lacy from his fight against Joe Calzaghe, but they fail to realize that Lacy used to have an incredibly dangerous left hook that he threw. After he injured his shoulder, his left hook went away, he didn’t look the same. If Whyte can’t bring back his once dangerous left hook, then I don’t know how in the heck he’s going to be able to compete against the best fighters in the sport. His right hand isn’t good enough. If Whyte had a right hand like the talented Deontay Wilder, then yeah, I could see him still doing well with just one hand. However, Whyte’s right hand is nothing special at all, and he’s not going to beat the top talents in the divisdion with just that weapon. Like I said, I can’t even see Whyte beating the likes of Chisora. At this point, I can see David Price beating Whyte, because his right hand isn’t good enough to take Price out in my opinion. Without a left hand, Whyte would be at the mercy of Price’s big shots.