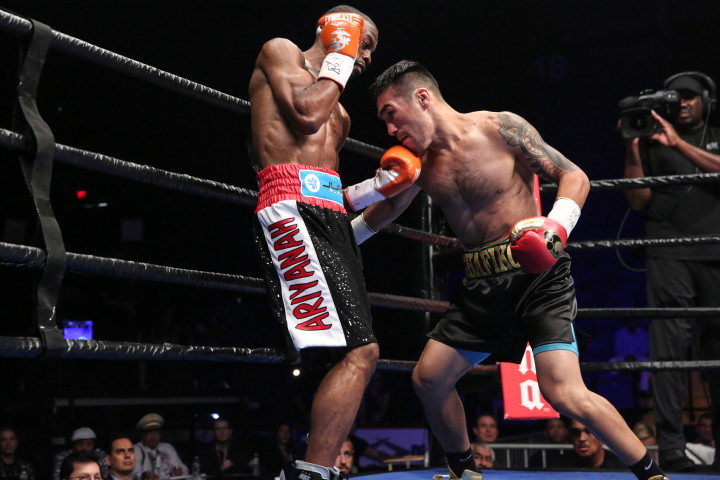 (Photo Credit: Nabeel Ahmad/Premier Boxing Champions) By Jim Dower: #9 IBF, #14 WBC lightweight contender Denis Shafikov (37-2-1, 20 KOs) pulled off a big upset on Saturday night in stopping previously unbeaten Jamel Herring (15-1, 8 KOs) in the 10th round in a scheduled 10 round fight on Premier Boxing Champions on ESPN at the Santander Arena, in Reading, Pennsylvania, USA. Referee Gary Rosato stopped the contest at :036 of the round.

Herring’s corner threw in the towel in the 10th to save their badly hurt fighter who was defenseless at the time. Shafikov, 31, knocked Herring down with a big right hand to the head in the 2nd round that sent the former 2012 U.S Olympian to the ropes. The ropes held Herring up, so the referee counted it as a knockdown.

Shafikov hurt Herring with a tremendous right to the head in the 9th round. Shafikov unloaded a storm of shots against the hurt Herring, but he wasn’t able to put him down despite the fact that his legs looked gone. Herring shook his head numerous times in the round to let Shafikov know that he wasn’t hurt.

Herring was hurt though, as his legs looked rubbery and was unable to protect himself. Somehow through sheer human will, Herring made it out of the round. In between rounds, Herring stood while he training told him that he would stop the fight if he didn’t show him something in the 10th.

Shafikov landed two hard left hands to the head of Herring moments into the 10th round. This promoted Herring’s trainer to waive the towel to let the referee know they wanted the fight stopped.

Herring came into the fight a 2-1 favorite to in. However, it was clear from the 1st round that the 5’10” was going to have problems tonight with the 5’5” Shafikov’s punching power despite having a huge five inch height advantage over him. Shafikov was both the harder puncher and the guy with the faster hand speed.

Herring did his best to try and keep Shafkov on the outside with his jabs and left-right combinations, but it didn’t work out too well. Shafikov was able to duck many of the shots that Herring threw to get inside on him to land his big power shots. Shafikov was able to walk through Herring’s lighter punches without any problems to nail him with big blows to the head and body. 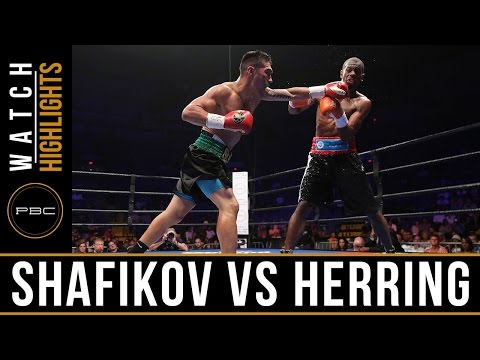 Herring fought well in round one in jabbing and moving around the ring to avoid the shots from Shafikov. This was before Shafikov had gotten warmed up. He wasn’t really letting his hands go in any real way.

Herring was cut on the side of his right eye in round seven from a punch. Herring also had a lot of blood coming from his mouth from round four. That was likely a product of the uppercuts that Shafikov was hitting him with on the inside.

In the 5th round, Shafikov hurt Herring with a hard left to the head. Shafikov then flurried on Herring with 10 unanswered blows to the head. It was a credit to Herring that he was able to take the shots without going down because he was clearly hurt.

By the 7th round, things were looking very bleak for Herring, as he appeared to have lost every round from the 2nd and he needed to do something spectacular to get himself back into the fight. Herring tried to load up on his shots, but he didn’t have the power needed to hurt Shafikov. That was the whole problem. If he could have thrown with more power, then he would have been able to at least cause Shafikov to think twice before coming after him to try and land his own big punches.

For Shafikov, he says he wants to get another shot at a world title. He was beaten by Cuban Rances Barthelemy by a 12 round unanimous decision last December in a failed effort to win the vacant IBF lightweight title. In 2014, Shafikov was beaten by former IBF World lightweight champion Miguel Vazqez by a 12 round unanimous decision in a fight that was closer than the scores handed down.

Herring looked like a good fighter, but he didn’t have the experience to deal with someone with the kind of talent and seasoning that Shafikov had going for him in this fight. Before this fight, Herring’s best wins were against Yakabu Amidu and Luis Eduardo Florez. Those guys were not nearly good enough to deal with the kind of talent that Shafikov had going for him tonight.

Is Canelo a coward or the real deal? »