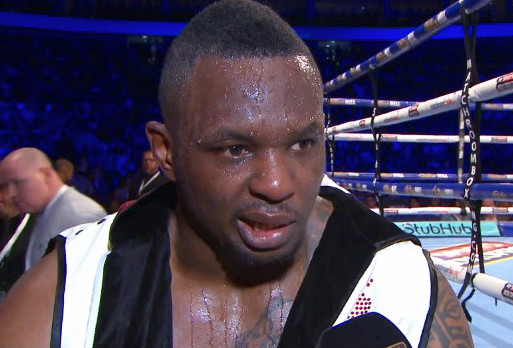 By Scott Gilfoid: British domestic level heavyweight Dave Allen (9-0-1, 6 KOs) says that Dillian Whyte (17-1, 14 KOs) is going to need to wait until October before he’ll agree to fight him, because he’s not going to jump inside the ring this month to face him on just three weeks’ notice on July 30 for Whyte’s next fight on the undercard of the Joshua Warrington vs. Patrick Hyland fight card at the First Direct Arena in Leeds.

Whyte needs an opponent for that date, and he’d like nothing better than to fight the 24-year-old Allen. Whyte has also called out former light heavyweight world champion Antonio Tarver for that fight date.

“I’m not going to fight Dillian Whyte on three weeks’ notice when he’s been preparing for the last 10 or 11 weeks for the O2 show. He will have to fight me in October,” Allen said to skysports.com. “Obviously it’s a fight I want. Would I beat Dillian Whyte in the shape I’m in right now? No, absolutely I wouldn’t. I’m going to be 100 per cent on top of my game.”

I don’t give Allen much of a chance of beating Whyte ever. The difference in talent between the two heavyweights would be too huge for the young, 6’3” Allen to be able to compete with Whyte. It doesn’t matter that Whyte still hasn’t shown that he’s regained the full use of his surgically repaired left shoulder. He still looks more than good enough to beat a limited fighter like Allen.

Allen did not look good in his last fight in stopping 39-year-old American journeyman Jason Gavern (27-21-4, 12 KOs) by a 4th round retirement last March on the Kell Brook vs. Kevin Bizier card at the Sheffield Arena in Sheffield, UK. Allen was very slow of hand and foot, and he was getting hit constantly by Gavern. Much of the time, there was very little to separate the two heavyweights. In the end, Gavern looked tired more than anything and quite old. He chose not to come out for the 5th round.

Allen was throwing a lot of rabbit punches in the fight, and at one point, he threw Gavern to the canvas with a wrestling move. It looked like a body slam to me. The referee Howard John Foster didn’t take any points away from Allen. He told him to stop using wrestling moves. That didn’t stop the rabbit punches from Allen, as he continued to land those shots.

Honestly, I don’t see Allen lasting more than two or three rounds against Whyte. The talent difference between these two guys is too much. Allen is more of a younger version of Gavern in my view. When healthy, I see Whyte as a better version of Dereck Chisora. The question is when will Whyte’s left shoulder return to the level it was at before the surgery.


« Chilemba wants to beat Kovalev in front of his own fans