Sullivan Barrera to Pascal “Keep your word, fight me next!” 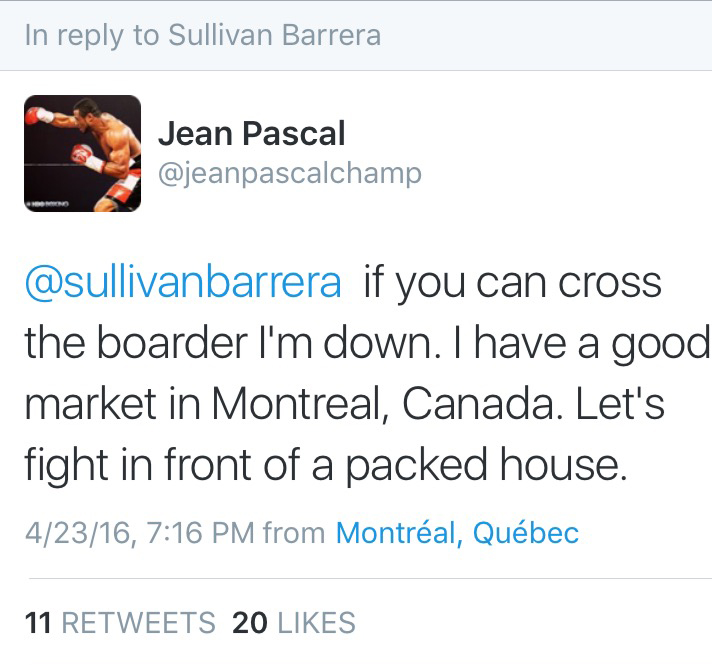 Former Cuban amateur standout Sullivan Barrera (17-1 12 KOs) is training hard with new trainer Derik Santos. The Florida-based duo have gelled and can’t wait to show off the new and improved Barrera in the very near future.

With Sergey Kovalev and Adonis Stevenson already locked into their next bouts, Barrera wants to face former champion Jean Pascal in a high stakes showdown. With both fighters coming off of losses, the heavy handed fighters are sure to produce fireworks in what would be the definition of a crossroads roads battle. The winner would be in a great position for several major fights in the winter and spring of 2017.

Pascal in fact has already agreed to the bout, displaying his desires on his verified Twitter timeline. Barrera intends to take him up on his offer and has no problem traveling to Canada to make the fight happen.

@sullivanbarrera if you can cross the boarder I'm down. I have a good market in Montreal, Canada. Let's fight in front of a packed house.

“I’ve been trying to get a fight against Pascal since last year,” Barrera stated. “I have power and he has power. I need a win and he does too, so let’s do it. You already agreed to the fight so stop ducking me. You’ve been all talk so be a man of your word and make it happen. I am ready to fight you now. Let’s give the fans a great fight.”

With Barrera coming off his first career loss and Pascal losing 2 of his last 3, and all three losses between them coming against elite competition, there is no better time than now for these heavy hitters two face each other.

Joshua vs. Breazeale: Dominic to take Anthony into deep waters »