Joshua to Breazeale: “You’re in my jungle now!” 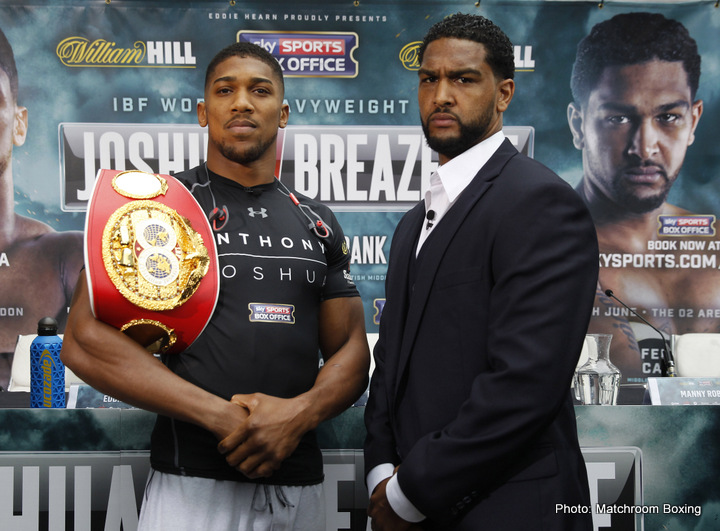 By Scott Gilfoid: IBF heavyweight champion Anthony Joshua (16-0, 16 KOs) says he has no pressure on him for his first title defense of his IBF belt this Saturday night against unbeaten American challenger Dominic Breazeale (17-0, 15 KOs). Joshua will be defending his title in his own hometown in London, England, at the O2 Arena.

Joshua calls the place his “jungle,’ and it’s hard to know whether he feels Breazeale can’t win a decision or what.

Joshua has a bad habit of bum rushing his opponents right from the get go, and that nasty habit almost cost him the fight last December when he was staggered by Dillian Whyte. Joshua likely would have been blasted into oblivion if Whyte’s bad left shoulder hadn’t popped on him in the 2nd round, causing him to fight with just one healthy arm the rest of the way. Joshua tends to go right after his opponents in the early rounds without using movement, jabbing or his boxing skills.

It’s all slugging with Joshua. He’s gotten away with it thus far, but that style can only take you so far if you can’t come up with more tools and mix in some boxing. Throughout history, the sluggers have been shown to have a very, very short shelf life. I suspect we’ll see the same with the hulking 6’6”, 250lb Joshua. If he can’t learn to box, use movement, and show some finesse, I think he’s going to take major punishment and wind up getting knocked out repeatedly.

“You’re in my jungle now. There’s no pressure on me,” said Joshua at the final press conference. “Once that bell goes, you can’t hide the instinct, the instinct that you want to get someone out of there. I hope I can go in there, stay relaxed and do what I planned to do. But once that bell rings something just comes over you and you want to get him out of there ASAP.”

That’s what I’m talking about when I say Joshua has a bad habit of bum rushing his opponents. Instead of using his head to think in the ring, he does by what he calls instinct and just looks to slug. I mean, if you’re going to be a good fighter, you’ve got to resist your natural impulses to just try and blast your opponent out of the ring straightaway. The thing is, Breazeeale – and every other heavyweight in the division – already know what Joshua is about. They know he’s going to come flying out of the blocks in round one looking to score a fast knockout. They know Joshua’s game full well, and they can all plan for it and come up with great game plans unless they’re stupid and not thinking.

When you look at many of the guys that Joshua has fought thus far, only a handful of them seemed to have a good strategy. Unfortunately for them, they didn’t have the power or the talent to take advantage of Joshua’s primitive caveman approach to fighting. Believe me, if Joshua had fought 16 healthy and in shape Dillian Whyte type fighters in his first 16 fights of his career, I think his record would be 0-16 right now rather than 16-0, especially if he failed to learn from his losses by implementing strategy and boxing skills to his game rather than just straight slugging. 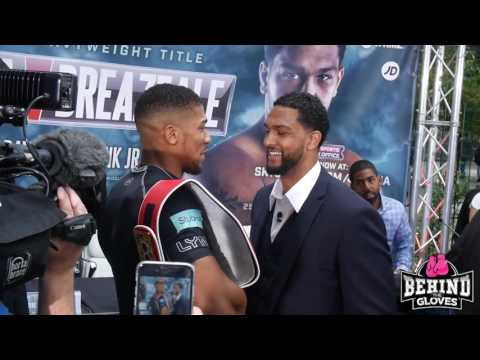 “I’ve got nothing to lose. I’ve always explained let’s get rid of the belts, the atmosphere, because when the bell goes it’s just me and him in the ring. Two gladiators, two respectful warriors coming together. We’re going to slug it out and put our 0s on the line,” said Joshua.

Of course, Joshua has something to lose against Breazeale. I think he’s being incredibly disingenuous by saying he has “nothing to lose.” Come on, Joshua, let’s be real and stop with the false fronts. YOU HAVE EVERYTHING TO LOSE. If you get whipped by Breazeale, then you might as well forget about that big money fight against Tyson Fury and Deontay Wilder for the time being. If you have your promoter Eddie Hearn make those fights immediately in the aftermath of this contest, you can bet you’re cut of the cash for those fights will be considerably less than what you could get if you beat Breazeale and look good in doing so on Saturday night. I think Joshua is just saying stuff to hear himself talk but without really believing what he’s saying. There is pressure for Joshua and he does something to lose in this fight, regardless of what he says.

“I respect you as a fighter, but I’m going to beat you. I’ve got to beat the best of the best,” said Breazeale. “I can’t wait, it’s been an opportunity I’ve been waiting eight years for this. It’s an opportunity of a lifetime and I’m ready for this. Expect fireworks. We’ll be going round for round, punch for punch and I expect to knock out Joshua.”

I looked at Breazeale’s eyes when he was speaking, and I believe his words. I believe he really does think he’ll beat Joshua. He’s not just saying stuff that he thinks the boxing public wants to hear. I think he honestly believes he’s going to whip Joshua, take his title in front of 17,000 of his British fans on Saturday, and fly back to the U.S a happy man with the IBF strap. 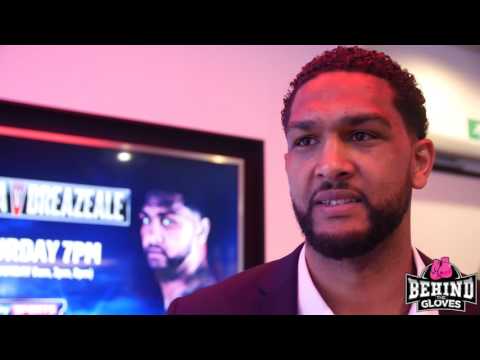 Breazeale will be looking to beat Joshua at his own game on Saturday night by slugging with him right from the start. The winner of the contest will be the guy with the better chin and the one who lands their shots first.