Fury’s promoter thinks Wladimir could retire if he loses 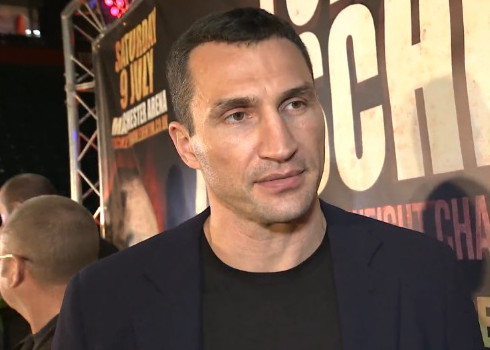 By Scott Gilfoid: Mick Hennessy, the promoter for IBO/WBA/WBO heavyweight champion Tyson Fury (25-0, 18 KOs) says he expects former world champion Wladimir Klitschko (64-4, 53 KOs) to put it all on the line in their rematch next month on July 9, and he sees him getting knocked out and sent into retirement.

Hennessy says Wladimir wasn’t prepared to take the chances he needed to on offense to win the first fight against the 6’9” Fury because he was afraid of getting nailed by a big shot and stopped. This time, Hennessy believes the 40-year-old Wladimir must take chances otherwise he’ll get beaten again like last time.

As such, Hennessy sees Wladimir coming out aggressively in attack mode and ready to throw shots. However, Hennessy still believes it will end badly for the Ukrainian with him losing once again and potentially retiring afterwards.

“I think depending on the results of this fight this is his last fight,” said Hennessey to IFL TV about this potentially being Wladimir’s last fight if he gets beaten in fashion by Fury. “If Tyson does what I believe he can and win this fight in style and take Wladimir out, then this is the end of his career. I think he [Wladimir] did everything he could in the last fight because he was shocked by Tyson’s range and his power. He was shocked, and you could see that he was scared to walk onto shots. He wasn’t prepared to take those chances because he knew he would get knocked out. I think this time he’s going to take those chances otherwise he’s got no chance. So he’s going to come to fight, and he’s going to put it all on the line. It’s going to be an outrageous fight while it lasts,” said Hennessy.

I do agree with Hennessy about Wladimir fighting in a much different manner than last time he fought Fury. Wladimir will definitely be throwing more punches because he’s smart enough to understand that he cannot win if he just stays on the outside and waits around all night for the perfect moment to unload with a right hand. Where I disagree with Hennessy is on the outside of the fight.

It’ll be a numbers game with Wladimir. He’ll throw a ton of right hands this time, miss with most of them, but eventually catch Fury and stop him. This is how it always is when you’ve got a huge puncher facing a defensive fighter that is leaning away from shots and moving laterally all night long like we saw from Fury last time he fought Klitschko. I think the fight will look a lot like the Chris Byrd vs. Ike Ibeabuchi fight with Wladimir throwing tons of shots, missing a lot, but then eventually landing a big punch that sends Fury into oblivion.

For the sake of argument, let’s assume that Wladimir does fight timidly and get knocked out or outpointed again by Fury. Will Wladimir retire under those circumstances? Nah, he’s not going to retire. I think Wladimir will reason it out that it was a bad style match-up for him against Fury, and he’ll choose not to retire. I then see Wladimir going after WBC champion Deontay Wilder.

I think it’s a given that the 6’7” Deontay will be the Plan-B backup option for Wladimir if he gets thrashed by Fury in the rematch. You have to remember that Wladimir has used Deontay as a sparring partner in the past, and he might figure that he has his number. Wladimir will take that fight and keep his fingers crossed that he can get to Deontay before he has a chance of landing one of his devastating right hand shots. Now that’s a fight that we’d see Wladimir sent into retirement proper.

Losing to Fury a second time won’t do it for Wladimir because Fury will be spoiling all night by fighting on the back foot and running like mad. Losing to him won’t be a back deal under those circumstances. But losing to Deontay by a crushing one-punch knockout will likely be the clincher in sending Wladimir into retirement.

I can see no coming back from a loss to Deontay for the aging Wladimir. It would be too much of a hint that it’s over with for him. I know he was whipped by Corrie Sanders in the past, but I think Deontay would be it much worse earlier by getting a 1st round knockout.

Tyson Fury at it again? »