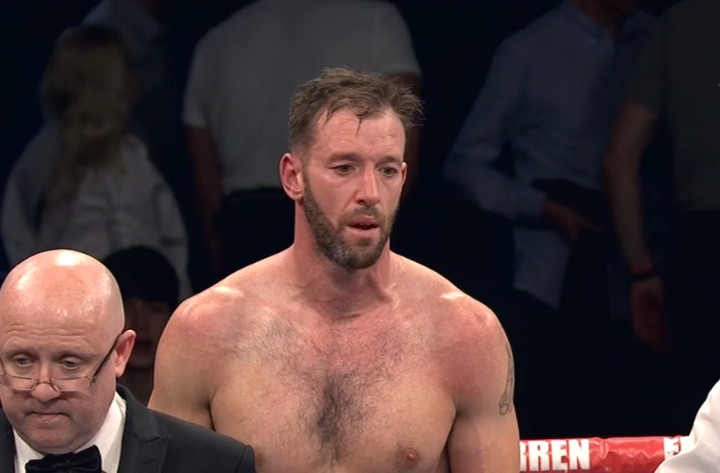 By Jim Dower: In what turned out to be a terrible mismatch, #9 WBC Dmytro Kucher (24-1, 18 KOs) quickly obliterated the 35-year-old former WBO cruiserweight champion Enzo Maccarinelli (41-8, 33 KOs) in the 1st round on Friday night to capture the vacant EBU cruiserweight title at the York Hall in London, England. The official time of the stoppage was 2:48 of round one.

Kucher caught Maccarinelli with a left hook to the head that staggered him late in the round. Kucher then followed up with a right-left combination that sent Maccarinelli down on the canvas. Maccarinelli took until the count of nine to get back to his feet. However, he was unable to stand withing swaying back and forth. The referee Giuseppe Quartarone halted the fight at that point. It was academic anyway because Maccarinelli’s corner had thrown in the towel, so the fight wasn’t going to go on even if the referee had let it.

The loss is bad news for Maccarinelli because a victory might have earned him a title shot against newly crowned WBC cruiserweight champion Tony Bellew, who needs an opponent for his first defense of his title for September. Maccarinelli would have given Bellew a recognizable name for the British boxing fans. The defeat for Maccarinelli was his seventh knockout loss in the last eight years since 2008. Maccarinelli has now been beaten eight times in his career with all eight losses from knockouts. The fact that Maccarinelli is getting knocked out so frequently now, he might want to consider hanging up his gloves and retiring from boxing. Maccarinelli wasn’t getting knocked out at this pace earlier in his career, and you have to wonder if his 2nd round stoppage loss to David Haye might have diminished his punch resistance. Maccarinelli’s loss to Haye was the start of Macc getting stoppage on a fairly regular basis ever since then when facing big punchers. Maccarinelli has mostly done well when facing weaker punchers that he was able to bang out, but he’s lost to a number of hard punchers.

Maccarinelli has been a slow starter in his fights in the last eight years, and that should have been reason enough for him to take things slow instead of looking to mix it up with Kucher. In 2012, Maccarinelli was dropped in the 1st round by domestic level fighter Shane McPhilbin (8-9-1). Maccarinelli was also knocked down in round three in that same fight. This should have been an easy fight for Maccarinelli because McPhilbin was not a world class fighter, and yet he had Maccarinelli on the verge of a knockout in round one. Given his history of getting hurt in the 1st round, Maccarinelli needed to take it easy with Kucher for two or three rounds until he got comfortable in there and settled down. It was a huge mistake on Maccarinelli’s part to try and slug with Kucher in the early going. Kucher isn’t known for being a big puncher. He’s got decent power, but he’s not a tremendous puncher like some of the other cruiserweights in the division like Murat Gassiev, Marco Huck and Oleksandr Usyk. You have to question Maccarinelli’s punch resistance or lack thereof for him to have gotten hurt by a fairly simple looking left hook from Kucher late in the round. It didn’t look like a particularly powerful left hook that Kucher hit Maccarinelli with that hurt him initially.

With the victory, Kucher wins the EBU cruiserweight title, and a likely top five ranking. However, it’s doubtful that Bellew will choose Kucher to fight in his first defense because he’s not a big name, and there wouldn’t be a great deal of interest from the local fight fans in the UK to see him to select him as his next opponent.

Provodnikov vs. Molina Jr. is a fight to achieve boxing Valhalla »