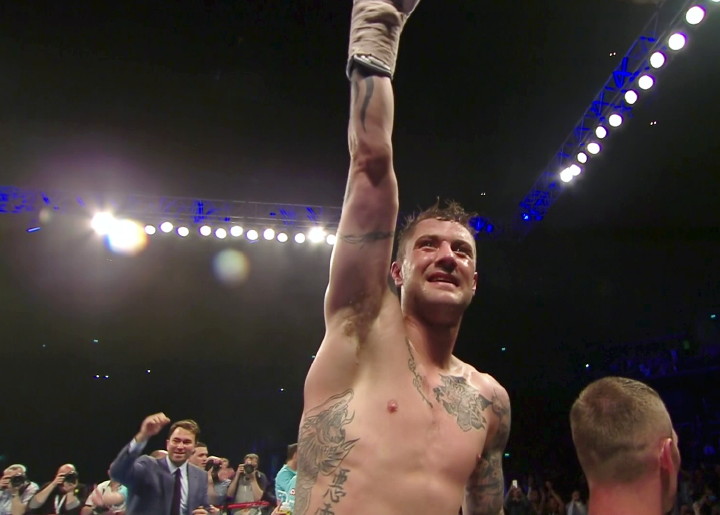 By Scott Gilfoid: It appears that the recent victory by Ricky Burns (40-5-1, 14 KOs) over an over-matched Michele Di Rocco (40-2-1, 18 KOs) last May seems to have knocked some ideas into his head, because he’s now saying he would like to fight the likes of Terence Crawford, Dejan Zlaticanin, John Molina and Ruslan Provodnikov for his next fight.

Burns, 33, knocked out Di Rocco in the 8th round on May 28th to capture the vacant WBA World light welterweight title in Glasgow, Scotland. The victory by Burns has some of his boxing fans thinking he’s rejuvenated him after his previous losses to Zlaticanin, Crawford and Omar Figueroa, as well as the fight he should have lost to Raymundo Beltran. However, you can’t tell whether Burns has improved in his last three fights because he’s faced very, very poor opposition in Di Rocco, Prince Ofotsu and Josh King.

We’re talking about fighters that would have likely been beaten even by the bottom feeders in the 140lb division, not just by Burns. I mean, it didn’t greatness from Burns to beat Ofotsu, King and Di Roco, did it?

“If I’m staying at super-lightweight, then the biggest name is Terence Crawford,” said Burns to skysports.com. “If I’m going to go back to lightweight then it’d be the rematch with Zlaticanin. It would be a totally different outcome. I’d be more than happy to fight him again.”

Burns lost to Zlaticanin by a 12 round split decision in 2014 by the scores of 115-113, 115-113 for Zlaticanin, and 115-113 for Burns. The fight took place in Glascow. I saw the Burns-Zlaticanin fight and I had Zlaticanin winning the contest by five rounds, and I was being very kind to Burns in my scoring.

I thought Zlaticanin should have won by seven rounds, but I gave Burns a couple of mercy rounds due to the fight being staged in his hometown in Glasgow. I thought the scoring was a joke. Zlaticanin totally dominated Burns, and 115-113 scores that made zero sense to me. The judge that gave the fight to Burns was just WAY OFF from the fight that transpired in the ring. Zlaticanin dropped Burns in the 1st round with a tremendous left hook to the head.

I don’t know how Burns got up from that knockdown, because he was badly hurt. Zlaticanin then spent the next 11 rounds pummeling Burns, who was doing little more than slapping and holding like mad. The holding was constant from Burns, and it so ugly to watch. If you were to score the fight based on who was the better clincher, Burns won ever round in a one-sided affair. Fortunately for boxing, the sport isn’t based on who the better clincher is.

“I was surprised to see John Molina get the job done against Ruslan Provodnikov. If that fight was to happen, I’m sure it would be a hard night’s work but I’d be confident,” said Burns about a fight against John Molina.

I honestly think Molina would give Burns major problems if the two of them faced each other. I don’t know who would win, but I think Molina would be pure trouble for Burns due to his punching power, size, superb jab and his high work rate. Burns would likely be forced to hold all night long to keep Molina from taking his head off with his big power shots. I’d be very surprised if Burns’ promoter Eddie Hearn were to put him in with Molina because it would be a very risky fight for Burns with not much to gain from it.

If Burns wins the fight, then it wouldn’t be a big deal due to Molina having lost so many times in the past. If Burns loses, it would be a crushing blow to his career, and it would confirm in the minds of many boxing fans that Burns never really turned his career around. He just benefited by careful match-making by Hearns in being put in with three easy marks in Di Rocco, Ofotsu and King.

Here’s the deal; if Burns fights Crawford again, I see him losing by a lopsided 12 round decision if he doesn’t get knocked out cold by him. I don’t think Hearn will make the Burns-Crawford 2 fight unless he’s looking to cash out. There’s too much easy money to be made for Burns as the WBA 140lb champion, so I don’t see him being matched against a good fighter like Crawford unless he forces Hearn to make the fight.

Yeah, Burns can force the issue if he wants to fight Crawford badly enough, but I think it would be stupid as heck. Burns needs to realize that he really hasn’t improved as a fighter. He’s just been matched against three easy guys in his last three fights.

Burns should look to fight his #1 challenger right now, which in this case is Kiryl Relikh. I don’t know if Burns can beat this guy because he looks to be a very good fighter. But if Burns can’t beat a guy like Relikh, then he has no business talking about wanting to fight Crawford, Molina, Zlaticanin or Provodnikov.


« Canelo and Chavez Jr: How weight dictates their careers