Broner vs. Provodnikov a possibility for Fall 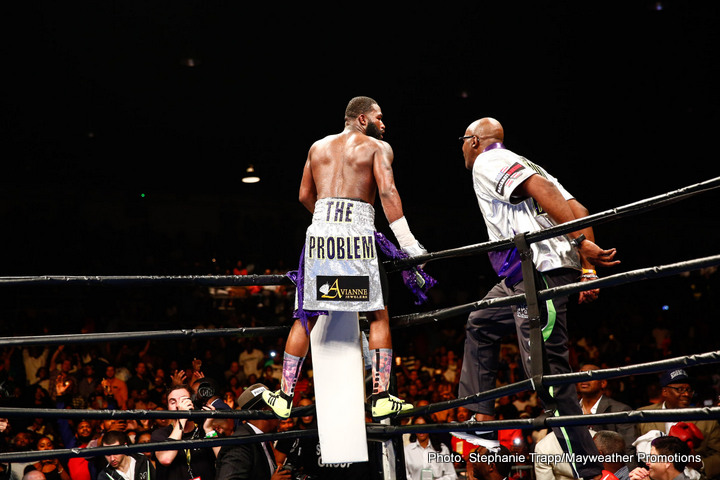 By Allan Fox: #1 WBC, #2 WBO, #3 WBA light welterweight contender Ruslan Provodnikov (25-4, 18 KOs) could be facing former four division world champion Adrien “The Problem” Broner (32-2, 24 KOs) in the fall if he defeats #8 WBO John Molina Jr. (28-6, 23 KOs) in their fight this Saturday night on Showtime Boxing from the Turning Stone Resort & Casino in Verona, New York. The Broner vs. Provodnikov fight is one that Showtime is interested in televising on their network, according to Dan Rafael.

Provodnikov, 32, has a very good chance of beating Molina on Saturday because this fight is heavily slanted in his favor. Molina is losing almost every time he fights nowadays, and he’s coming into the Provodnikov fight with three defeats in his last four fights.

It’s a wonder that Showtime even gave the green light to the Provonikov-Molina fight because Molina gave no effort in his losses to Broner and Humberto Soto in 2014 and 2015.

You have to wonder whether the Showtime executives saw those fights from Molina because if they had, they might not have been so eager to pull the trigger on televising the Provodnikov-Molina fight. If Molina puts in another non-effort like he did in the Soto and Broner fights, it’s going to make Provodnikov look bad even if he wins convincingly.

“If Ruslan Provodnikov wins Saturday the fight that could next is against Adrien Broner in the fall. That’s the fight Showtime Boxing wants,” said Dan Rafael on his Twitter.

It’s unclear whether Broner would agree to fight a dangerous puncher like Provodnikov because he fell apart from the pressure and the punching power of Marcos Maidana in their fight three years ago. Broner was knocked down twice by Maidana in that fight in losing a 12 round decision. Provodnikov is like a smaller version of Maidana, and he might be able to beat him if he can put enough pressure on him for 12 rounds.

Broner’s manager Al Haymon would have the final say so whether the Provodnikov vs. Broner fight happens or not. If Haymon can get Broner a fight against WBC welterweight champion Danny Garcia in the near future, then I see Broner not facing Provodnikov due to the risk involved in that fight.

Broner, 26, lost to Shawn Porter last year by a 12 round unanimous decision in June 2015. Broner has since won his last two fights against Khabib Allakhverdiev and Ashley Theophane. Broner looked good in those fights, but he wasn’t facing high caliber opposition with a lot of punching power. Provodnikov can really bang with both hands, and it would be a really risky fight for “The Problem” Broner if he takes that fight.

Provodnikov needs to stay away from light welterweights like Viktor Postol and Terence Crawford because those guys are pure boxers, and they would likely look to out-box him all night long.

DeGale vs. Jack likely to be moved from Sep to Nov »