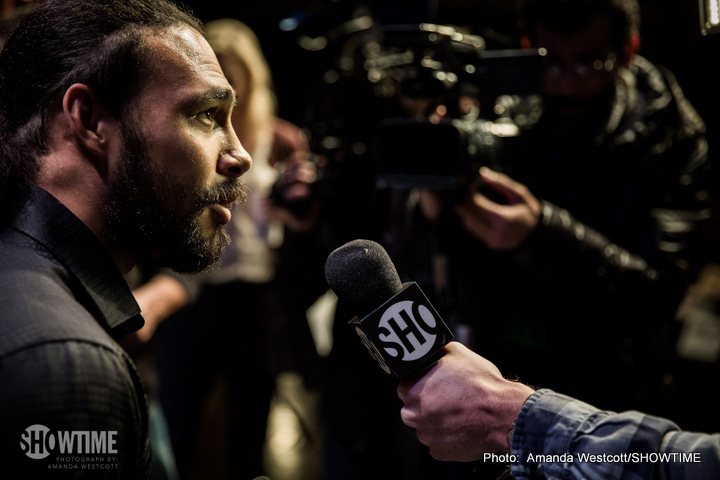 By Dan Ambrose: WBA World welterweight champion Keith “One Time” Thurman (26-0, 22 KOs) has less than a month before he faces Shawn Porter (26-1-1, 16 KOs) on June 25 at the Barclays Center in Brooklyn, New York. The two fighters sparred together three years ago, and Thurman supposed spent much of the time running from Porter to keep from getting hit.

Thurman, 27, has a different perception of what took place during the sparring sessions, which he says took place over a three to four week period. Thurman says he wasn’t running from Porter, he was “dodging” him and making him hit air. It’s understandable why some people might interpret dodging as a form of running because what it means is that Thurman wasn’t staying in the pocket against Porter. He was moving to keep from getting hit.

“I didn’t run. All I did was box. All I did was make him jump into the ropes and hitting the ropes,” said Thurman to Fighthype. “I out-boxed him three years ago. I was sparring somebody else for five rounds, and then I brought Shawn Porter in for the last five. There were a few days where he was part of the first five. When he caught me, I caught him back. We definitely landed the more effective punches in each and every round on a day to day basis for three to four weeks straight. Maybe they saw that Keith was on his back foot, Keith was moving; we can keep him running. I wasn’t running, man. I was dodging. The boy was swinging at the air. He’s got shorter arms than me. I made him miss. I made him pay,” said Thurman.

The boxing community wants to see a good fight between Thurman and Porter on June 25. We can only hope that Thurman chooses to stand and fight rather than moving all over the ring. Many fans believed that Thurman ran from 40-year-old Leonard Bundu in their fight in December 2014. Thurman was defensive about his performance afterwards, saying “This is the sport of boxing. I pick how I want to fight. Only some of them are booing.

The rest of them are cheering.” The fact of the matter is the fans were booing the entire time Thurman was speaking, and they were not cheering. They sounded unhappy. If Thurman wants to be the replacement for superstars like Floyd Mayweather Jr. and Manny Pacquiao, then he needs to learn how to stay in the pocket and not run around the ring, because what Thurman did in his fights against Bundu, Robert Guerrero and even Luis Collazo, was running.

Maybe it’s not possible for Thurman to change his stripes. He seems to be pretty set in his ways with his fighting style. I think it’s more of a mentality for him than anything. Thurman does not like to take risks in getting hit, so he tends to flee as soon as he lands one or two punches. Thurman will probably never have the exciting fighting style of someone like Gennady Golovkin because he’s unwilling to stay in the pocket and go after his opponents.


« Francisco Vargas vs. Orlando Salido this Saturday on HBO