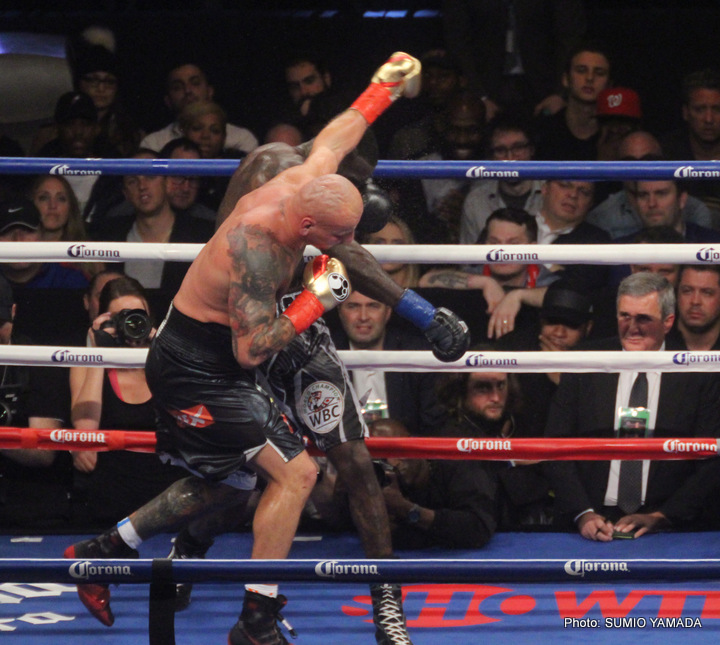 Dibella believes the 27-year-old Fury is the bigger name for any of the top heavyweights – David Haye and Anthony Joshua – to fight right now. However, Fury must get by Wladimir Klitschko in their rematch in a month and a half from now for Wilder to get a shot at him.

The conventional wisdom is that Fury will look to face IBF heavyweight champion Anthony Joshua in November in a huge unification fight in the UK rather than face the dangerous Deontay with his devastating one-punch knockout power. While a fight between Fury and Deontay would be a huge worldwide event, it likely wouldn’t match the interest of a Fury vs. Joshua fight in the UK.

Fury-Joshua wouldn’t resonate in the U.S though, because neither of these guys are huge names over there. You can argue that most casual boxing fans in America haven’t seen Joshua fight, and didn’t bother watching the 2012 London Olympics to see Joshua win a controversial gold medal after beating Italy’s Roberto Cammarelle in the finals that year. Fury would make it interesting for U.S audiences by his ability to sell fights based on his personality. The fans would learn about Fury quickly and be interested in seeing Wilder fight him.

The unfortunate part about Fury being the biggest name and the biggest payday in the division for the top heavyweights like Deontay is he probably won’t get past the 40-year-old Wladimir in their rematch on July 9. With Fury losing to Klitschko, there won’t be nearly the same amount of interest in fighting him. I mean, it would still be an interesting fight between Deontay and Fury, but how do you sell a fight like that? Do you just not mention the fact that Fury was smashed by Wladimir or do you come clean and admit it and hope that the fans will want to see the victim fighting Deontay rather than the winner Wladimir.

The Fury vs. Klitschko 2 fight is going to be a completely different fight this time from the first time they fought each other last November. Wladimir didn’t throw any punches in that fight, and Fury got the victory the easy way by default for intents and purposes. Wladimir just would not throw punches. He was just following Fury around with his right hand cocked like he was waiting for the perfect moment to throw it, but it never came. He was confused from the 1st round to the 12th. However, this time, Wladimir realizes that he’s got to throw right hands nonstop for him to win, so I think it’s reasonable to assume that Fury is going to be getting shelled all night long by Wladimir’s right hands.

Fury looked shaken up on one occasion last November after getting hit by a rare right hand from Wladimir. That was just a typical right hand from the Ukrainian fighter. It was nothing special. This time, I think we’re going to see Wladimir loading up on right hands and looking to bomb Fury out with shots. I don’t think Wladimir cares how many times he misses with his right hand. He’s going to land enough of them to get Fury out of there.

“There’s no question [Wilder vs Fury] is a potential fight, but Fury has to get past Klitschko,” said Dibella. “If Fury beats Klitschko again, [Fury vs. Wilder] is an immense fight. It’s certainly one that would be of huge interest in the US, in the UK, and worldwide.”

Dibella shouldn’t even waste his time talking about a fight between Fury and Wilder because I don’t see it happening in 2016. Fury, if he gets past Wladimir, will certainly take the bigger payday against Joshua. He’s not going to risk his neck facing a talent like Deontay and wind up plastered all over the canvas after getting hit by one of his howitzer-like right hands.

“There’s nothing that can get under my skin or nobody,” said Wladimir about his rematch with Fury.

I think Dibella has to face the facts that the only way Deontay gets a fight against Fury is after he’s run the gauntlet in his fights against Wladimir and Joshua. I think there won’t be much left of Fury by then. He’ll have two defeats on his resume and Deontay would be doing him a favor by fighting him. Wilder vs. Fury would be a fight that would be forlorn at that point and no better than Wilder fighting Chris Arreola. I mean, I think Dibella would happily make a fight between Wilder and Fury under those circumstances with Fury coming off back to back losses, but it would be pathetic.

It would be sloppy thirds for Deontay and just a business fight and not a sports related bout. Could you imagine a Super Bowl team playing a team that had been twice eliminated in back to back Championship games in a Super Bowl match? It would make no sense at all, and just be looked at by knowledgeable fans as Wilder putting a struggling fighter out of his misery.

I would like to think that Dibella wouldn’t even consider matching Deontay against Fury once he’s been whipped by Wladimir and Joshua in back to back fights, but I think Dibella would consider still making the fight. It would look bad. You would have Deontay fighting a guy with an 0-2 record in his last fights rather than a more deserving top 15 contender that has worked his way into position for a title shot.


« Artur Beterbiev vs. Ezequiel Maderna this Saturday on ESPN

Scotland has a new Burns night to celebrate »