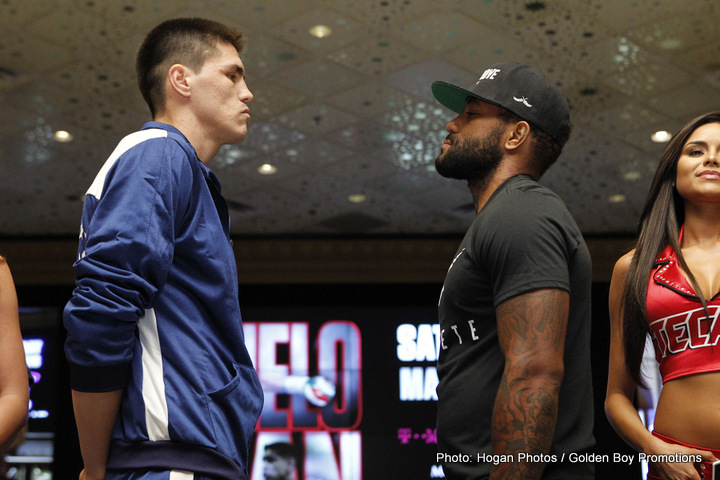 By Ian Aldous: This Saturday night, as part of a huge HBO PPV event emanating from the T-Mobile arena in Las Vegas, Nevada, former world title challenger, Curtis Stevens (27-5) will battle the unbeaten Brazilian, Patrick Teixeira (26-0) in the 168lbs division. The event is headlined by the eagerly anticipated WBC world middleweight championship bout, as Saul Alvarez defends against Amir Khan. Earlier this week Curtis took some time to chat with me over the phone during final preparations for Saturday.

Earlier this year, Stevens made the big decision to begin training with John David Jackson in Florida, after a lifetime of being trained by his uncle Andre Rozier. It was something he felt was the right thing to do and the best way to continue to develop as a fighter. “It wasn’t a difficult decision. My uncle’s been training me since I was five years old. At the end of the day this is a business. He is my uncle at the end of the day but we just had to make the right business decision for me at the time.” He continued “I’ve been with John since February, it’s been great. We make an awesome team, he shows me things that I knew, but he’s just bringing it back to life. Everything’s going according to plan.”

He’s not only changed his method of preparation for future fights, he’s also changed his nickname. He’s now known as ‘Cerebral Assassin’ and not his past moniker of ‘Showtime’. It coincides with him wanting to start a new chapter in his professional career. “Yes, ‘Showtime’ was a thing of the past. It’s been a name that I’ve been holding on since I was in high school and when I started boxing. It’s a new Curtis Stevens evolving on May 7th. It’s a kick-off for the new name, new everything.”

The man standing in his way on Saturday night is the unbeaten twenty-five year old Brazilian prospect, Patrick Teixeira. He’s fought predominantly in his native country but has boxed on U.S soil four times. Stevens firmly believes he’ll be Patrick’s toughest test to date. “Yes, he really hasn’t fought anyone, I believe, from what we all see. From what I see, he comes to fight and we’ll just have to see if he brings the same situation with (against) me.”

It’s interesting that Stevens is fighting on an undercard headlined by Saul ‘Canelo’ Alvarez, as it’s partly because of Canelo that Stevens linked up with John David Jackson. It began when Canelo was preparing for his fight with Miguel Cotto and Stevens was brought in to spar him. Sparring a fighter the calibre of Alvarez is obviously something any fighter would learn from. “It made me think about my career from a whole different attitude. It was excellent working with him.”

Just over a year ago Curtis moved away from the traditional boxing ring and ventured into BKB (Big Knockout Boxing), fighting Gabriel Rosado to a draw for the BKB middleweight title. The biggest differences from boxing as we know it were that it was a seven round fight (of which each round was two minutes) and no ropes, essentially fighting in a pit! The fight was not recognized as a pro bout and doesn’t appear on his record. “It was good. You know, anything you do for the first time is different, so I’m used to taking a little grip on the rope but there was no rope to lay on so you had to fight. It was an awesome experience.” He didn’t hesitate when I asked if it was something he’d do again. 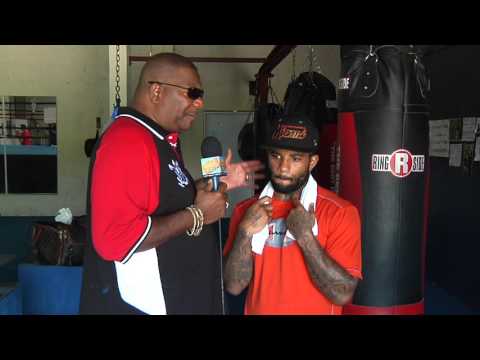 It’s been almost eighteen months since his last recognized professional bout and he fought with regularity before that, so I had to ask if he was at all worried about having a little ring rust on the night. His response reflected his laid back attitude! “No, I’m a fighter and you have to fight or get your ass whipped. Hopefully he hits me and knock the rust off me and it’s just all back to normal (laughs).”

As Gennady Golovkin sits in waiting for the winner of the Canelo/Khan middleweight epic, Curtis Stevens just has to keep on winning to get himself back in the middleweight title scene.

Canelo vs. Khan, a 12-round fight for Canelo’s WBC, Ring Magazine and Lineal Middleweight World Championships, is promoted by Golden Boy Promotions in association with Canelo Promotions and sponsored by “Cerveza Tecate, Born Bold,” O’Reilly Auto Parts, Casa Mexico Tequila, DOOM® — Fight Like Hell on May 13, and HANDS OF STONE: The True Story of Roberto Duran, in theaters this August.

David Lemieux vs. Glen Tapia is presented by Golden Boy Promotions in association with Eye of the Tiger Management and

Patrick Teixeira vs. Curtis Stevens is presented by Golden Boy Promotions in association with Main Events.

The mega-event will take place Saturday, May 7 at T-Mobile Arena in Las Vegas and will be produced and distributed live by HBO Pay-Per-View beginning at 9:00 p.m. ET/6:00 p.m. PT.


« Shannon Briggs believes Anthony Joshua is the future of boxing

Anthony Joshua gets agitated during face off with Breazeale »