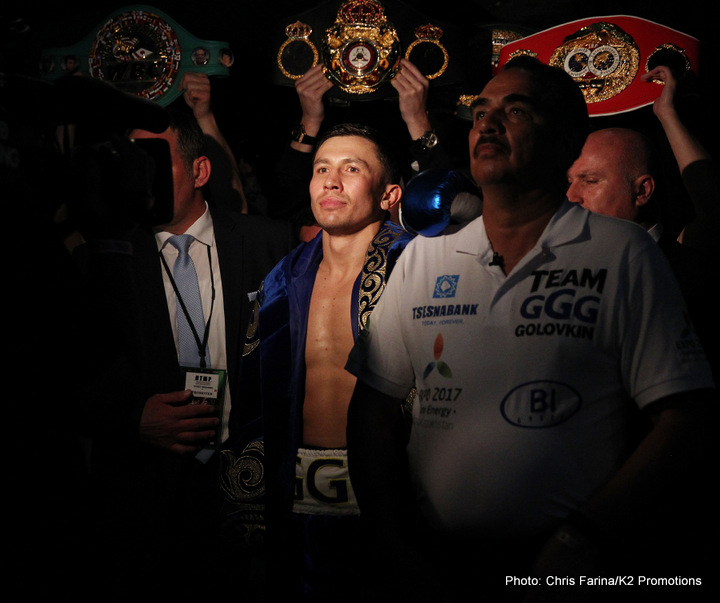 Sanchez says Golovkin will exploit Canelo’s weaknesses and KO him. However, Sanchez doubts the Canelo vs. Golovkin fight gets made because of what he feels is Canelo’s diva attitude when it comes to feeling he’s bigger than boxing with the creation of his own weight division at 155.

Canelo stopped Amir Khan in the 6th round last Saturday night at the T-Mobile Arena in Las Vegas, Nevada. Sanchez was impressed with Khan up until he got careless and was knocked out in the 7th round.

“They announced him [Canelo] as the middleweight champion. The middleweight limit if 160 pounds,” said Sanchez to the media. “He’s got this diva attitude about 155. It’s not a 155lb title. It’s a 160lb title.”

When asked if Golovkin has changed his mind about not fighting Canelo at a catch-weight, Sanchez said “He won’t drop an ounce. We’re ready to sign a contract. He [Canelo] gets knocked out in eight rounds. I thought Khan fought a good fight, but he got careless. He was setting him up, and sure enough, he caught him. I thought Khan looked better in terms of composure. He just got caught and got careless. We’re going to do what Gennady does best, and we’re going to exploit him and knock him out. It’s not because of what we saw tonight, but because Golovkin is a better fighter. I thought he [Khan] looked fantastic in the first couple of rounds with his speed. You know why it [Golovkin vs. Canelo] doesn’t get made? It’s because his diva attitude. He’s bigger than boxing,” said Sanchez. 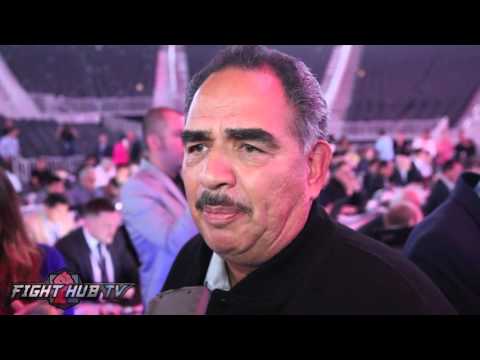 Canelo said he’ll be giving Golovkin an offer for a fight. It’ll be up to Golovkin to decide whether he’ll accept the offer from the 25-year-old Canelo. If the offer is lowball money offer, then Canelo will likely not get the fight with Golovkin.

Canelo said that he’s ready to fight Golovkin at 160, but he says he’s leaving it up to his management to decide on the weight for the fight. It’s possible that they might ask Golovkin to come down to 157 or 158, if not 155. It would hardly be worth it for Golden Boy to ask Golovkin to come down to 158, because that’s a weight he could make easily without being weakened and it would hurt Canelo if Golovkin is at full strength for the fight and not weight drained for having come down in weight.

The Canelo that fought Amir Khan last Saturday night would likely have a lot of problems against a strong puncher like Golovkin, who wouldn’t leave himself open for Canelo’s shots the way that Khan ddi in the 6th round. Golovkin would likely jab Canelo from the outside and soften him up the way he did David Lemieux and Curtis Stevens.