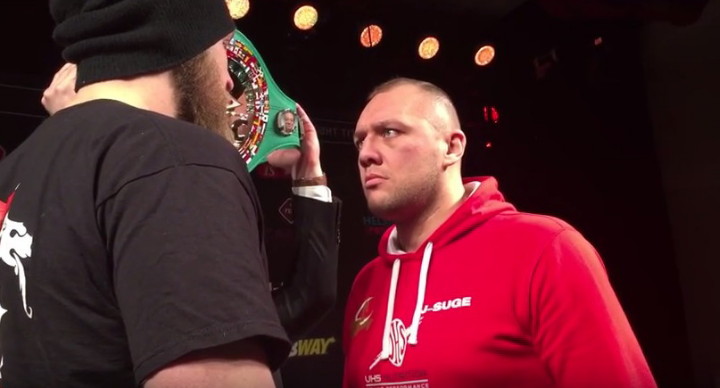 Duhaupas, 35, is coming off of an impressive 6th round knockout win over the 6’7’ Robert Helenius earlier this month in their fight for the vacant WBC Silver heavyweight title at the Hartwall Arena in Helsinki, Finland. Duhaupas dropped Helenius in the 4th and 6th rounds before the fight was finally halted.

Duhaupas is arguably a better fighter than the three other opponents that Hearn has selected for Joshua to pick from. The three candidates are Bermane Stiverne, Eric Molina and Dominic Breazeale. I think Duhaupas’s chin, size and moderately good punching power would keep him around long enough for him to bang out Molina and Breazeale. With Duhaupas’s size, he would outbox the shorter 6’3” Stiverne.

It might be fairly easy for Hearn to sign Duhaupas for a fight against Joshua compared to the other candidates. Duhaupas is someone that is willing to travel and fight in foreign countries. I think he would be the ideal opponent for Joshua.

Duhaupas’s ability to take punishment could be a problem for Joshua because he would likely stick around long enough to test both his stamina and his chin. We haven’t seen the heavily muscled Joshua go to the deeper portions of his fights yet. All the body building muscles could turn out to be lead weights for Joshua once the fight gets to the 10th round.

Duhaupas would need to actually throw punches to get to the later rounds. He can’t make the same mistake that Charles Martin did this month in his title defense against Joshua by just standing and waiting around for Joshua to get tired from throwing punches. I mean, you’ve got to actually fight to make Joshua tired, and you need to nail him in the chin the way that Dillian Whyte did last December.

Joshua was totally gassed after two rounds in that fight. If Whyte’s shoulder hadn’t given out on him in the 2nd round, I think he would have finished him off in the 3rd. Duhaupas needs to go after Joshua and force him to fight a very fast three minutes of every round. When you get those muscle guys, they punch for a little while, but then they get winded, pumped up and their arms turn to rubber. That’s when Duhaupas can take advantage of the situation and blast Joshua out in front of his own fans in London. It’s pretty much like that.

Duhaupas couldn’t deal with Deontay Wilder’s speed, size and punching power last September. Wilder took the fight to the inside in the 10th round, and gave Duhaupas a tremendous beating.

In the 11th, Deontay continued to pummel Duhaupas until the referee decided he’d seen enough and pulled the plug on the fight with a bloody and battered Duhaupas still on his feet. Deontay gave Stiverne just as bad a beating, but he couldn’t land anything because he was too short. Wilder also knocked out Eric Molina last year in a one-sided fight. Molina just looked timid and useless in that fight.

Honestly, there’s not much available for Hearn to pool from for Joshua’s next fight. Joshua can either take on one of the gang of four that Hearn has selected for him, or he can wait around for one of the quality heavyweights like Carlos Takam, Kubrat Pulev or Joseph Parker to free up and be available to fight him.


« Deontay Wilder: My priority is to KO Alexander Povetkin