By Chris Williams: Given the lack of talk an d hype about this Saturday’s fight between Manny Pacquiao (57-6-2, 38 KOs) and Tim Bradley (33-1-1, 13 KOs), it’s surprising that there’s a fight at all between these two guys. Compared to their two prior fights against each other in 2012 and 2014, this fight has been very quiet. The lack if interest from boxing fans in the Pacquiao-Bradley 3 fight reminds me a lot of the zero interest fans had in Pacquiao’s fights against Brandon Rios and Chris Algieri in the past. Pacquiao-Rios brought in 470,000 and Pacquiao-Algieri ended up with 400,000 buys.

Their promoter Bob Arum doesn’t seem to be bothered by the lack of fan interest in the fight, because he believes that Pacquiao-Bradley 3 will bring in between 700,000 to 800,000 pay-per-view buys on HBO. If that’s the case, then the fight will do roughly as well as their previous fights. That’s hard to believe because there was a lot of interest in those two fights from the boxing world.

The first Pacquiao-Bradley fight in 2012 brought in 700,000 PPV buys, while the second brought in 800,000 buys. There was a reason for both of those fights to take place. There isn’t too much of a reason for the third fight between Pacquiao and Bradley other than the possibility of more good PPV numbers. Pacquiao and Arum could have gone in a different direction by facing some new blood like Terence Crawford, Amir Khan or Adrien Broner, but instead they went with Bradley for a third time.

“I really think that we have a shot to go over 700,000,” said Arum. “I really think that Manny and Bradley will do most of the numbers, but let me tell you that my Hispanic army is marching out there and we are going to do a tremendous number from people, aside from the Pacquiao-Bradley numbers, that want to see these Hispanic stars in very, very important fights. I am pretty confident that we will do over 700,000 with a little break here and there. Maybe if Trump opens his mouth a little bit more we can go over 800,000.” 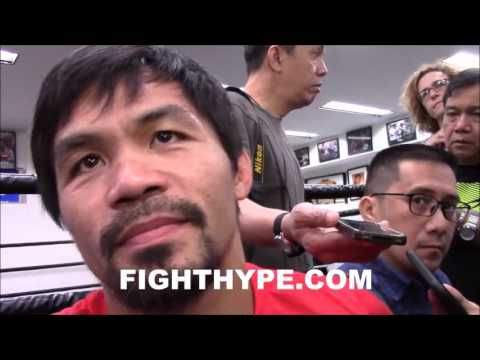 I don’t think those three fights are going to bring in the PPV numbers that Arum thinks they will. I’d be suroprised if more than a few thousand fans decide to pay to see the Pacquiao-Bradley 3 card due to the undercard fights. Arum has said so himself that boxing fans don’t purchase PPV cards in big numbers based on the undercard fights. You can argue that was justification for Pacquiao’s last three fight cards having dreadful undercard fights.

They’ve been generally undercards with prospects matched against weak opponents rather than interesting fights that would attract fans. I think this Saturday’s card is no different from that. The only interesting fight on this Saturday’s undercard is the Abraham-Ramirez fight. That’s a fight where you don’t know who’s going to win. With the Ramirez vs. Perez and Valdez vs. Gradovich fights, it’s clear who will be winning those fights.

“The Ticket situation is good. It is about what it was last time that Manny fought Bradley,” said Arum. “There are approximately 2,000 tickets left and a lot of those will go in the last week. They are selling at a very good clip so if we don’t sell out we will have at least 14,000 people in the arena on April 9. I am still optimistic that they will all be gone by fight night.”

I expect those last 2,000 tickets to be given away to fans rather than purchased at the last minute like Arum is hoping will be the case. This is a fight that has already been played out one time too many, and the fans just don’t seem to be willing to purchase tickets for yet another fight without there being a real reason to purchase the tickets.