Pacquiao explains why he no longer KOs his opponents 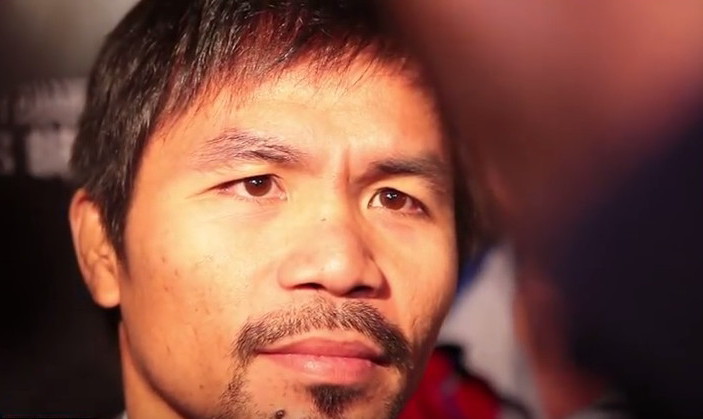 By Chris Williams: Former eight division world champion Manny Pacquiao (57-6-2, 38 KOs) finally has opened his mouth to speak about why he’s not knocked anyone out in the past seven years. Pacquiao says he’s not a natural 147lb fighter. He’s a 140 pounder fighting in the wrong division.

Pacquiao says he could fight in the 135lb division if he wanted to right now. Why he would want to fight in a division like that would be the big question. The lightweight division is barren of stars, and it would be a crazy move on Pacquiao’s part if he were to move down to that division in hopes of scoring knockouts.

Pacquiao hasn’t knocked anyone out since his 12th round stoppage win over Miguel Cotto in 2009. Fans have wondered for a long time why Pacquiao’s knockouts dried up overnight starting in 2010. Before 2010, Pacquiao was knocking everyone out, but after his fight against Cotto, the knockouts have completely disappeared for the Filipino fighter.

“It is harder to knock out opponents in the 147-pound division. Because, in fact, my natural weight is 140-pounds and if I demand a little more of myself, I can get down to 135,” Pacquiao said to ESPN Deportes.

The time for Pacquiao to have moved back down to 135 is long since passed. Pacquiao had his chance to move back down to 135lbs after his win over Oscar De La Hoya in 2008. But instead of moving back down to lightweight, Pacquiao chose to move up to welterweight, where he has enjoyed large paydays ever since fighting the likes of Tim Bradley, Brandon Rios, Miguel Cotto, Shane Mosley, Juan Manuel Marquez, and Chris Algieri.

If Pacquiao was willing to take a pay cut in order to continue racking up knockouts, then he should have moved back down to 135. He chose not to do that, so the tradeoff is he’s not been able to knock the bigger guys out.

Pacquiao needs a knockout more than ever in his next fight on April 9 against former two division world champion Tim Bradley. If Pacquiao is unable to get a knockout in this fight, he could wind up having a very difficult time trying to win. Bradley, 32, seems to have Pacquiao’s number after two fights, and he’s already talking about having a game plan that he feels will be effective in beating the 37-year-old Pacquiao.

While it wasn’t a big deal if Pacquiao occasionally lost a fight in the past due to him able to bounce back from his losses. It’s very important now that Pacquiao win his next fight against Bradley, because there’s too much at stake for Pacquiao if he loses.

Pacquiao is running for the senate seat in the May elections in the Philippines, and a loss to Bradley may be enough for the fans to forget about Pacquiao completely. He’s already got a strike against him with some of the fan due to his recent comments inflammatory comments. Pacquiao has tried to smooth things over since then, but it’s unclear if it’s worked.

If Pacquiao gets beaten by Bradley, it could be bad for him in the election. That’s why it’s important for Pacquiao to take matters into his own hands by looking to KO Bradley to make sure that there’s no chance of controversy in this fight.

Pacquiao is going to have problems in this fight against Bradley because he’s going to be looking to box his head off. Bradley knows what to do in this fight to beat the aging Pacquiao, so you can expect Bradley to do just that when he gets inside the ring on April 9.

Bradley’s trainer Teddy Atlas has analyzed the past Pacquiao-Bradley fights and he knows exactly what Bradley needs to do in order for him to hand Pacquiao his seventh loss of his career. Bradley will be greatly improved for this fight. I wish I could say the same thing about Pacquiao. He’s the one who lost his last fight to Floyd Mayweather Jr. Pacquiao is the one who is taking the April 9 fight against Bradley without a tune-up after coming off of career-threatening rotator cuff surgery.