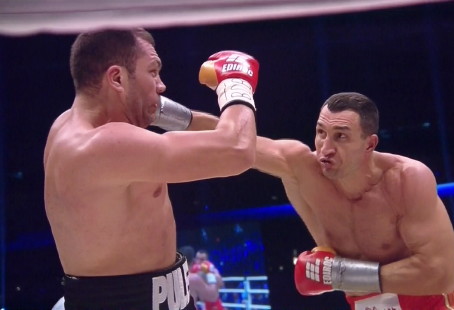 By Scott Gilfoid: Two failed former world title challengers Kubrat Pulev (22-1, 12 KOs) and Dereck Chisora (25-5, 17 KOs) will be fighting for the vacant EBU heavyweight title on May 7 at the Barclaycard Arena, in Hamburg, Hamburg.

This is a fight that makes sense in terms of the match-up, as both fighters are now with Sauerland Events. Putting them in with each other is a no-brainer in house type of move.

I wouldn’t be surprised if we see a couple of rematches with them if their fight on May 7 turns out to be an exciting one. This might be as good as it gets for Pulev and Chisora. I mean, I can’t see either of them ever winning a world title. There are weak champions for these guys to pick off at the moment.

This is kind of an odd move for heavyweights as old as these to, as the EBU title is one that is often fought for by younger heavyweights while on their way to bigger contender and world title status. For Chisora and Pulev, it seems they’ve got it the wrong way around. The fact that they’re fighting for the EBU strap at their age gives you a pretty good indication of how things are going for them.

Pulev, #3 WBC, #11 IBF, #14 WBA, is still ranked highly in the heavyweight division despite being knocked out in the 5th round by former heavyweight champion Wladimir Klitschko in November 2014. Pulev had no defense for Wladimir’s left hook, and he was knocked down repeatedly by this punch until getting knocked out in the 5th. Since that loss, Pulev has won his last two fights beating 40ish journeyman Maurice Harris and Georgia Arias. Pulev’s promoters at Sauerland Events were obviously not going to take any chances with him by putting him in with a talented contender after his loss to Wladimir, so they put him in with old journeyman fighters.

Chisora, #12 WBC, #12 WBO, has a five-fight winning streak going since his 10th round knockout loss to Tyson Fury. The sanctioning bodies haven’t been nearly as kind to Chisora after his loss to Fury, as they dropped him to near the bottom of their rankings.
‘’Pulev has been on my radar for a while now,’’ said Chisora, the 32 year-old British-boxer from Finchley. ‘’He’s a great athlete and he has my respect, but come fight night, I’m not messing around. I’m coming to mess this guy up. I’m going to outwork him and out strength him. I’ll be all over him from the first bell.

This is going to be a big size mismatch for the 6’1” Chisora, as the 6’4 ½” Pulev is nearly four inches taller than him with a much longer reach. Granted, Chisora won’t be dealing with the long reach of the 6’9” Fury, who was able to toy with the much shorter Chisora in their two fights, but it’s still going to be almost impossible for Chisora to land his wide shots against Pulev. If I’m Chisora’s trainer, I don’t like this match-up at all whatsoever.

Pulev has one of the best jabs in the heavyweight division, and he fights tall. Pulev does well against short fighters that lead with their head like Chisora does. Chisora makes it even worse for himself by his habit of throwing looping shots. This means he needs heavyweights that will allow him to crowd them in order to land these type of punches. Oftentimes, Chisora’s punches wind up hitting the back of his opponent’s heads. If Chisora starts nailing Pulev with rabbit shots on May 7, he might need to worry about the referee stepping in and taking points off because some referees don’t put up with rabbit punching heavyweights.

The winner of the Chisora-Pulev fight will likely pushed up the rankings a little. What these two heavyweights need is to be put in a mandatory spot without having to fight anyone good to get in that position. I don’t think Chisora and Pulev can beat a top guy if they’re asked to fight in an eliminator. I doubt that Chisora and Pulev will ever be picked out by one of the heavyweight champions to fight for a world title in a voluntary defense by the champion.

Chisora might have burned his bridges with the way he acted during the run up to his title fight against former WBC heavyweight champion Vitali Klitschko in 2012. Chisora slapped Vitali hard in the face at the weigh-in before the fight, which obviously is a very risky thing to do because of the potential for injury.

Chisora also spit water into the face of Wladimir Klitschko while he was in the ring before the fight. That kind of behavior from Chisora might make it difficult for him to get selected by one of the heavyweight champions in a voluntary defense. I mean, I could see WBC champion Deontay Wilder throwing a bone to Chisora at some point, but I don’t think he will. As for Pulev, he’s got too difficult of a style for him to be just given a shot at a title. He’s someone that has the potential to score an upset against any heavyweight on a good night. That’s why I don’t see him ever getting picked out by any of the champions.

Pulev will be turning 35 in May. He obviously needs to speed his career up if he wants to make something happen.

‘’I know I have what it takes to be World Champion, and next time I will be successful, but for now, all my focus is on May 7 and Chisora. This is a fight I can’t afford to lose!” said Pulev.

I don’t see Pulev winning a world title. By the time he does get another title shot, he’ll likely be 37 or 38. That’s pretty old. I can’t see it happening. Pulev lacks the punching power, and he won’t last long against the likes of Deontay or Charles Martin. Even Tyson Fury would likely slap him around for 12 rounds and make him look old.

I see Pulev using his size and boxing skills to out-box Chisora on the outside. Pulev is a good boxer when fighting someone who doesn’t have the reach, power or talent to get him out of there. Chisora is more of a mid-sized heavyweight, who really doesn’t belong in there with the super heavyweights in the division. Pulev is clearly a super heavyweight in size. On May 7, Chisora will look like a fighter that wondered into the wrong ring against someone much too big for him. The end result will be Chisora getting badly out-boxed and defeated by a likely decision. I won’t be surprised if Chisora quits if one of his eyes starts puffing up like what we saw in his loss to Fury in 2014.

« Pulev vs Chisora May 7 in Hamburg

Paul Williams Returns To Boxing As A Trainer »