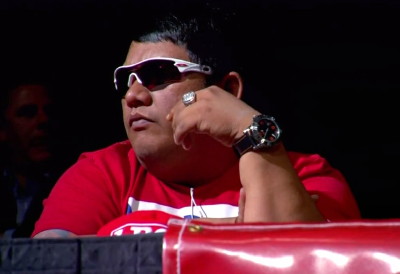 Pacquiao and Bradley are split at 1-1 in their two fights, and this fight will prove once and for all who the better fighter is between them. Buboy thinks Pacquiao will erase all doubt in this fight by knocking the 32-year-old Bradley out in front of the sold out MGM Grand crowd in Las Vegas, Nevada.

“We’re going to knock him out,” said Buboy to sports.inquirer.net.

I think Buboy is wrong before with his predictions in the past. Buboy and trainer Freddie Roach can make all the knockout predictions they want, but I think in this the younger generation will prevail with Bradley winning the fight and kicking Pacquiao off the Top Rank mountain once and for all. Pacquiao will be heading for his retirement after getting his final pay check from this fight.

We’ve been hearing about Pacquiao skipping training days during this camp for injuries and for the need to let his aging 37-year-old body to rest from the workouts. That’s obviously not good because it tells you how Pacquiao is struggling to make it through this training camp.

The fact that he can’t even go full throttle during the entire camp doesn’t bode well for him in his fight against Bradley because he’s likely to be outworked by the younger American fighter.

“He looks good, he looks sharp,” said Roach to the sports.inquirer.net. “He’s training as hard as ever. He’s ready to fight Monday. Yes, he’s ready.”

You can make a strong argument that Pacquiao started going downhill as a fighter once Roach dumped Pacquiao’s strength and conditioning guru Alex Ariza. Ever since Ariza was dumped, Pacquiao has been looking old, slow and weak in my view. Talk about your mistakes. I think Pacquiao would have been better off dumping Roach and keeping Ariza, because he’s the only guy that seemed to work well in building up Pacquiao’s strength and turning him into a real killer puncher when he was following his strength and conditioning program during his best years at 140 and 147.

It’s obviously too late now to bring Ariza back in time to save Pacquiao for the Bradley fight. There’s only a couple of weeks left in training camp right now. Even if Ariza was brought back at this time, he couldn’t likely save Pacquiao. Ariza can’t walk on water with just two weeks to turn Pacquiao into the devastating puncher he was from 2008 to 2010. Those were unquestionably Pacquiao’s best two years of his career, and Ariza deserves full credit for building up Pacquiao’s strength and making him a devastating puncher during that time frame.

Pacquiao should have selected a different opponent for this fight because I think he blew it choosing Bradley. I’m not sure that it was Pacquiao that picked Bradley. There are quite a few boxing fans who believe Pacquiao’s promoter Bob Arum was the one the rejected non-Top Rank candidates Amir Khan and Adrien Broner in order to have Pacquiao fight one of his own fighters for his final fight.

I don’t know who picked Bradley, but whoever it was, they blew it and made a bumbling decision. Pacquiao would have likely made more money fighting someone like Khan or Broner. The interest would have been higher from the boxing public than shoving a third fight between Pacquiao and Bradley down the fan’s throats for a third time and expecting them to eagerly purchase the fight on HBO PPV.

Believe me, when you go to the troth with the same old fight and expect to get the same results every time, you’re going to find out that it doesn’t work like that. Fans can’t stomach retread fights until infinity. They want new blood. The best way to kill the sport and destroy a fighter’s fan base is to stick him with the same opponent repeatedly like we’re seeing with Pacquiao fighting Bradley in repeat fights.

It’s too bad Pacquiao didn’t get a clue and pick a different fighter for this last fight, because I see this fight bringing in horrible PPV numbers. If they had listened to me, Pacquiao would be fighting Broner next and there would be huge interest in the fight.

« Khan still undecided about whether to fight Golovkin