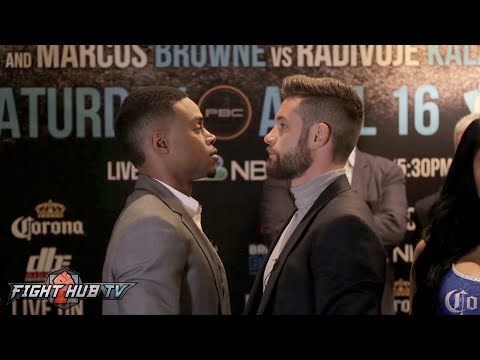 By Dan Ambrose: #5 WBO welterweight contender Chris Algieri 21-2, 8 KOs) isn’t impressed with the lack of competition that unbeaten blue-chip fighter #2 IBF Errol Spence Jr. (19-0, 16 KOs) has fought during his short pro career. Algieri does not feel there is any reason why he shouldn’t hand the 26-year-old his first defense next month in their fight on April 16 on Premier Boxing Champions on NBC from the Barclays Center in Brooklyn, New York.

Spence and Algieri need a win on April 16 to catapult them into a world title shot against the winner of the March 26 fight between IBF welterweight champion Kell Brook and Kevin Bizier.

Brook figures to win that fight quite handily. Spence would be the far tougher choice for Brook or Bizier to fight than the 31-year-old Algieri, who only has eight career knockouts on his resume.

Algieri is punching better with the help of new trainer John David Jackson, but he’s still not a huge puncher by any means. In Algieri’s last fight against Erick Bone, he was forced to go the whole 10 round distance in winning a close decision. Bone is the same guy that Shawn Porter blew out not too long ago.

“Spence hasn’t fought anyone. I don’t think he’s fought a guy who’s tried to win. To label me as a gatekeeper against someone who hasn’t made real fights isn’t really a fair distinction,” Algieri said.
At this point, Algieri is starting to look like a gatekeeper/trial horse type of fighter. Amir Khan used Algieri as an opponent last May to get a victory, and he got through the contest in winning a 12 round decision. Algieri gave Khan some problems, but at the end of the night, Khan was the winner. If Algieri had some punching power, then he likely would have gotten Khan out of there. It was Algieri’s lack of punching power that undermined him in that contest.

Spence has the power to make this as an easy fight. You can make an argument that Spence’s last opponent Alejandro Barrera (28-3, 18 KOs) is a better puncher and a more dangerous opponent than Algieri. Spence took Barrera out in five rounds last November in Dallas, Texas.
Algieri needs to change his fighting style if he wants to be able to go the distance in this fight against Spence.

I’m not talking about Algieri winning the fight, because he doesn’t have much of a chance to do that. He can go the distance though if he reverts to his former pure boxing style that he used during most of his career. This involved Algieri moving constantly, jabbing and holding. Even with that style, it’s going to be difficult for Algieri to go the full 12 round distance.

Algieri sounds like he plans on focusing on his boxing skills on April 16 rather than punching with Spence. That sounds like a smart plan. Algieri does not have a great deal of positive experience in his career. He does have limited experience against top-level opposition, but you cannot say that’s experience that has been positive.

Algieri has fought several good fighters during his career, but he’s arguably lost to all three of them. That doesn’t make him a good fighter though. It still makes him a gatekeeper type of fighter whether he wants to accept that label or not.

Spence needs to jump on Algieri and get him out of there as quickly as possible on April 16 so that he makes a statement in this fight. The 5’6” Pacquiao knocked Algieri down six times in their fight in 2014, and that’s someone who Spence will be compared to in his fight with Algieri. If Spence can’t dominate Algieri with ease like Pacquiao did, then a lot of people will question whether Spence has the talent to become a huge star in the division in the future like many people see him becoming.

« Cotto vs. Kirkland possible for June 18 on HBO PPV