Adrien Broner to surrender to authorities on Monday 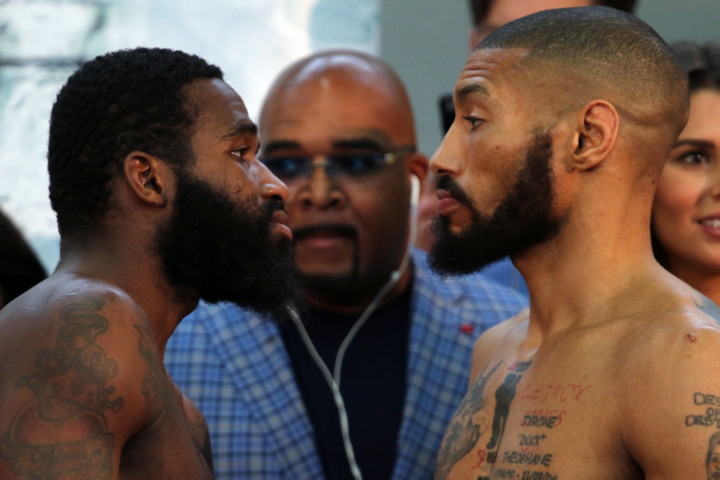 (Photo Credit: Stephanie Trapp/Mayweather Promotions/Premier Boxing Champions) By Jeff Aranow: Former four division world champion Adrien “The Problem” Broner (31-2, 23 KOs) will reportedly be surrendering to the authorities on Monday. Broner, 26, will be surrendering several days after his televised fight against Ashley Theophane (39-6-1, 11 KOs) this Friday night on April 1 on Premier Boxing Champions on Spike from the DC Armory in Washington, DC. The bail for Broner is said to be $100,000.

According to cincinnati.com, Broner will be turning himself in. He has outstanding warrants out on him for charges of aggravated robbery and felonious assault since March 22. The charges are from an incident that took place on January 21 outside a Madisonville bowling alley in Cincinnati.

“Court documents say Broner, the current WBA super lightweight champion, pointed a handgun at a man during a betting dispute over thousands of dollars and then knocked him unconscious,” said Cincinnati.com.

Broner, 26, will be traveling back to Cincinnati after the fight to deal with the charges against him.

Earlier on Thursday, Broner failed to make weight for his fight against Theophane. Broner came in over the 140lb limit at 140.4lbs. He didn’t elect to try and take off the extra 0.4 pounds, which was odd move on his part.

Most champions would go back into the dressing room and use the two hours that was given to him to lose the weight so that they could still have their title on the line for the fight. You have to wonder whether Broner is distracted by his looming legal problems, and that was perhaps the reason for him failing to make weight for the fight. You can argue that Broner could have completely drained himself to take off the 0.4 pounds, and still come in on Friday to easily beat Theophane. The fact that Broner didn’t choose to even try to make weight could be an indication that he’s distracted and not entirely focused on the fight in front of him on Friday night. That could be a good thing for Theophane if he’s able to rise above his pedestrian efforts that we’ve seen from him in the past. Theophane never really looked like a world beater, and he probably won’t be able to summon enough talent to defeat even a distracted and/or weight drained Broner.

At 26, Broner has already accomplished huge things in the sport in winning world titles at super featherweight, lightweight, light welterweight and welterweight. However, Broner’s outside of the ring activities makes you wonder whether his head is still into the sport at this point in his career. He’s dabbled at rapping, and he seems to have other interests outside of boxing, which is what’s made him a star. Broner doesn’t have enough talent to juggle multiple careers, we’re finding out. If he’s going to be the fighter that he was in the lower weight classes, then he’s going to need to rededicate himself to the sport. We still don’t know what’s going to happen with the charges against Broner from his incident in Cincinnati. It’s believed that there will be a plea bargain, but we’ll soon find out in the future.

« Callum Smith thinks Groves has a sense of entitlement